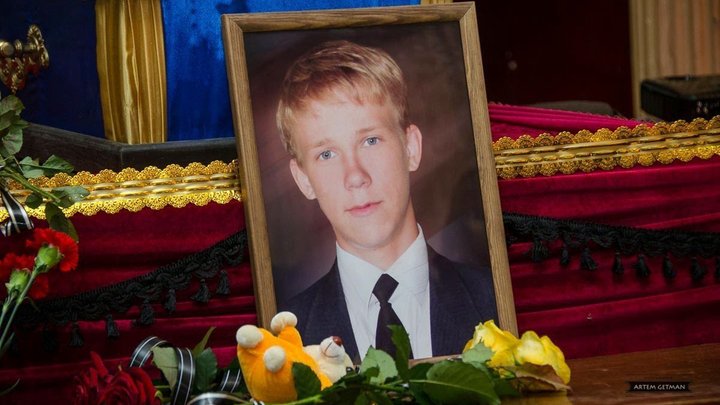 It is six years today since Stepan Chubenko, who was just 16 and still at school, was seized, and then tortured and killed, by Russian-controlled militants in Donetsk. They had stopped him because of the ribbons in the colours of the Ukrainian flag on his rucksack, and then also found a scarf from a western Ukrainian football club.  This was enough for three men to savagely torture a child, and then execute him in cold blood.  It was presumably also enough for Russia, since the latter has refused to hand the main murderer over to Ukraine.

It remains unclear why the Russian occupation authorities in Crimea went through the cynical pretence of arresting Vadim Pogodin on 20 June, 2017.  This was reported to have been because the Ukrainian authorities had asked INTERPOL to issue a Red Notice (that a person is on the wanted list) for the former militant commander.  Unlike very many of the militant commanders, Pogodin was a Ukrainian national, so that was, in principle, possible, though it is near certain that both Moscow and the Crimean occupation regime had long been aware of Pogodin’s past.

It seems most unlikely that there was ever any serious chance that Russia would hand Pogodin over to face justice, if only because he knows too much, including quite possibly about the downing with a Russian BUK missile of Malaysian airliner MH17 through his contacts with Russian ‘former’ military intelligence man, Sergei Dubinsky.  Both Dubinsky and Igor Girkin, two of the Russian militants, now on trial in absentia in the Hague over their believed role in MH17, were extremely vocal in predicting that Pogodin would not be handed over to Ukraine.

Girkin and Dubinsky were quite right and Russia did refuse to hand Pogodin over.  By making the sheer possibility of extradition so public, Russia then demonstrated to the entire civilized world that it was prepared to protect a militant who had been found guilty, not only by Ukraine, but by the Russian-controlled militants, of torturing and killing a child.

Stepan Chubenko was a bright child with passionate interests and views.  A student at Kramatorsk Secondary School No. 12, he also played as goalkeeper for the Kramatorsk Avangarde youth team and was apparently hoping to become a professional player.  As well as sport, he seems to have been into amateur theatre and history, and also wrote poetry himself.

His mother recounts that it was Euromaidan that made Stepan look at life in a different way and to become aware of the propaganda on television that his parents had not yet noticed.

His pro-Ukrainian position, after the conflict began in Donbas, was clear and unwavering.  Stalina Chubenko says that her son became immersed in the partisan movement and actively took part in rallies.

After Kramatorsk and neighbouring Sloviansk were seized in April 2014 by Girkin and his heavily armed men, Stepan’s parents sent him to Russia to stay with his maternal grandfather.  He returned to Ukraine a month later, after the first reports of bombing, telling his parents that he couldn’t sit in the rear like a rat when his parents and his country were in danger.

They then sent him to Kyiv, but decided, after Sloviansk and Kramatorsk were liberated in early July 2014, that it was safe for him to return home.  Donetsk, however, was by then occupied, and Stepan was seized on July 23 as he passed through the city.

His parents became frantic after Stepan stopped answering his phone and went themselves to Donetsk.  It is possible that militant leader Alexander Zakharchenko, who was certainly not known for humanitarian impulses, agreed to help because Stalina Chubenko  is ethnically Russian,  Whatever the reason, Zakharchenko did find out and told them that Stepan had been killed.

They later found out that he had been beaten in Donetsk, and then taken to a village outside the city where two militants Yury Moskalev and Mikhail Sukhomlinov , on Pogodin’s orders, tortured the lad and then shot him.  Pogodin is reported to have taken the gun after seeing that Stepan was still alive, and fired the last fatal shot.

Presumably because of the Chubenkos’ personal appeal, Zakharchenko initiated a criminal investigation over Stepan’s murder and one of the three men believed to have been involved – – was taken into custody. Moskalev served a short sentence then fled to Russia. Stalina Chubenko has learned that Moskalev was detained in 2016 on an INTERPOL red notice, however Russia did not hand him over to Ukraine.

Stalina Chubenko has described how “three burly and armed men shot a tortured, unarmed 16-year-old boy, whom they’d tied up with the T-shirt he played football in over his head. During the exhumation, I saw my child with his hands bound with scotch tape”.

The above details of Stepan’s murder are from the so-called ‘Donetsk people’s republic prosecutor’.  The report says that Pogodin told Sukhomlinov and Moskalev that Stepan was “a member of Right Sector, a participant in the burning of people in the Trade Union House in Odesa (a Russian propaganda lie), “and is also the bearer of other political and ideological views for which he should be shot”.

The Chinese authorities are said to have used drugs and alcohol to get tank drivers and others to crush peaceful protesters on Tiananmen Square in 1989.  To savagely torture and murder a child, Russia used propaganda lies.

It was learned in May this year that Pogodin has now been made the deputy director of a ‘Technologies and Restoration’ company and is getting money from the occupation authorities in Crimea and the Moscow government for repairs to streets, stairs, etc. in Crimea.