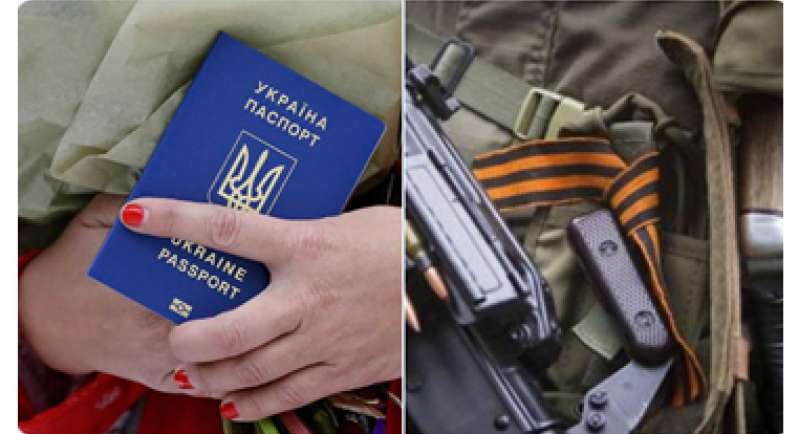 A new ‘decree’ issued in the self-proclaimed ‘Donetsk people’s republic’ will lead to Ukrainian internal passports being invalidated. Human rights monitors believe that this is deliberate, with the real aim being to force local residents in occupied Donbas (the so-called ‘Donetsk’ / ‘Luhansk people’s republics’] to instead use either Russian passports, of those of unrecognized ‘republics’.

The ‘decree on the special features of the use of Ukrainian citizens’ passports on the territory of DPR’ was signed by ‘DPR head’, Denis Pushilin on 23 September, and is actually claimed by Kremlin-loyal media to ‘legalize’ the use of Ukrainian passports on temporarily occupied Ukrainian territory.  In fact, it does nothing of the kind, since any Ukrainian internal passport  is rendered invalid through the addition of “stamps from DPR civil registration bodies and departments of the authorized migration body of the Russian Federation”

The Eastern Human Rights Group can obviously not name their sources (who would be seized and tortured immediately), but cite the latter in reporting that the Russian-controlled ‘DPR’ is seeking to eliminate the use of Ukrainian passports altogether.  The method is basically that, if in occupied Donbas, a person uses his or her Ukrainian passport, for example, in registering a marriage, on crossing the checkpoint between ‘DPR’ (or ‘LPR’) and government-controlled Ukraine, the ‘DPR militants’ will place a stamp in the Ukrainian passport, thus immediately invalidating it.  The human rights monitors have been told that this is a pilot project in occupied Donbas, aimed at forcing residents to obtain Russian passports’, as well as those produced by the pseudo ’republics’.  The Eastern Human Rights Group have long warned that a major operation is underway in occupied Donbas aimed at integration of the local population with the Russian Federation.  Ukrainian currency is no longer used, the Ukrainian language also, and Russia is illegally making it easy to get Russian citizenship.

On 24 April 2019, Russian President Vladimir Putin issued a decree simplifying the process for Donbas residents to gain Russian citizenship. He claimed this was a ‘humanitarian move’, though contradicted his own lie in July that year when he issued another degree, this time making it possible for all Ukrainians in the Donetsk and Luhansk oblasts (Donbas) to receive Russian citizenship according to ‘simplified procedure’, even if they live on Ukrainian government controlled territory.  Both moves were condemned by the international community, with the EU, for example, calling Russia’s actions “an encroachment on Ukraine’s sovereignty” and in breach of the Minsk Agreement. On 10 October 2019, the EU stated that it did not recognize Russian passports issued in occupied Donbas, and that they were issuing guidelines to member states on how to recognize such documents and not recognize them.

In March 2020, ‘DPR’ announced that Ukrainian would no longer be a ‘state language’ in the pseudo republic, with this status to be given only to Russian.  The move was claimed to be in recognition of “the integration processes between ‘DPR’ and the Russian Federation”, and made nonsense of western-supported plans for reintegration of the so-called ‘republics’ with the rest of Ukraine.  In June, ‘LPR’ removed Ukrainian from schools.

Russia is also using more insidious methods to strengthen its influence over occupied Donbas and to spread anti-Ukrainian propaganda, especially among children.  There is systematic militarization and indoctrination from a very young age, with children taught  that they should love and defend Russian proxy Donbas ‘republics’ and that Ukraine is essentially the enemy.  Details here: Donbas children deployed as weapons in Russia’s hybrid warfare against Ukraine