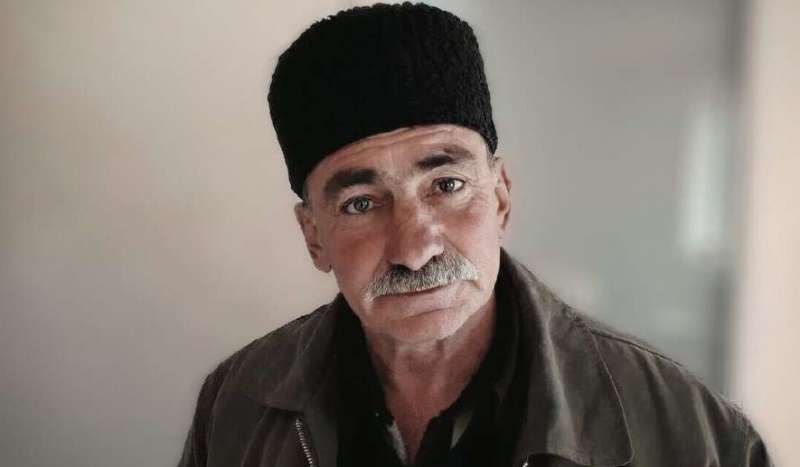 The Russian FSB burst into the home of former political prisoner Kazim Ametov early on 4 December and turned the place upside down, before leaving “without anything of importance for their criminal case”.  The search came less than a month after the 63-year-old activist of the Crimean Tatar movement and his lawyer filed a lawsuit against Russia’s penitentiary service and police over the torture-like conditions he was held prisoner in for over two years.

10 individuals turned up at around 7 a.m on Friday morning., including two ‘official witnesses’ whom the FSB had clearly (and in breach of regulations) brought with them.  The search was on the basis of a warrant issued by the Russian-controlled Kievsky District Court in Simferopol on 2 December, with the eventual document stating that nothing had been discovered and removed signed by an FSB ‘investigator’ identified only as Mitrofanov. During the search, they took all telephones away, and tried to remove the Koran, at which point Ametov told them to leave it alone and put it back in its place.    The FSB claimed to be looking for Ametov’s son, Gulliever who is not in Crimea.  They accuse him of being a member of the Noman Çelebicihan Battalion (otherwise known as the Asker Battalion) which Russia insists on claiming is an ‘illegal armed formation’.  Despite the name, the Battalion is not an armed formation and it is perfectly legal in mainland Ukraine.  While Russia clearly doesn’t like the wish of Battalion members for an end to Russian occupation, its horrific prison sentences against at least four Crimean Tatars and current trials oMedzhit Ablyamitov and Battalion founder Lenur Islyamov on charges linked to alleged involvement in a Ukrainian organization in mainland Ukraine are in flagrant breach of international law.

Gulliver Ametov would not have been committing any offence if he were or had been in the Battalion, but events on 4 December make it clear that the road home to Crimea is closed to him while Crimea remains under Russian occupation. whether or not he was a member are immaterial.  The lack of evidence in all such ‘trials’,, supposed prosecution witnesses who were in prison when they claim to have been with Gulliver Ametov in the Battalion and ample proof that the charges are preposterous do not change the near certainty that any Crimean Tatars charged with involvement will be convicted and sentences to 10 years or more.

The timing of Friday’s hour-and-a-half search is surely no coincidence.  Hearings began on 16 November into Ametov’s courageous court challenge over the inhuman conditions that he was held prisoner in for over two years.  Ametov was imprisoned from 23 November 2017 until 24 January 2019, first in the temporary holding unit in Bakhchysarai and then in the Simferopol SIZO [pre-trial detention unit].  He calls the conditions there inhuman and degrading, and akin to torture, and notes the damage the imprisonment did to his health.

Ametov’s lawyer, Rustem Kyamilev reports that during the hearing on 16 November, the parties presented their documents, setting out their position.  They presented the application lodged with the European Court of Human Rights back in 2019, describing the conditions in which Ametov was held (details here).

The FSB ‘operation’ on 23 November 2017 was supposed to arrest 83-year-old Vedzhie Kashka and four other veterans of the Crimean Tatar national movement:  Kazim Ametov; Asan Chapukh; Bekir Degermendzhy and Ruslan Trubach  Even after the officers used excessive force, causing the death of the elderly lady, there was no let-up in lies nor in effective torture of the four political prisoners. Although none of the men was a member of the Mejlis, Russian and Russian-controlled media systematically presented them as members of the Mejlis, alleging that weapons and drugs had been found during searches (details here).

The four men had been trying to help Vedzhie Kashka retrieve the family’s savings ($7 thousand) that an unscrupulous man who had ingratiated himself with Kashka’s granddaughter was refusing to return.  This individual, Yusuf Aitan  (a Turkish citizen)  began collaborating with Russia’s FSB, and it was claimed that the 83-year-old and the four men had been trying to ‘extort’ money from Aitan.  The claim was absolutely preposterous, especially since Aitan had actually given a note confirming that he was borrowing the money, yet the four men, all in their 50s and 60s,  were remanded in custody.

65-year-old Asan Chapukh was finally released under house arrest in October 2018 with symptoms indicative of a stroke.  It took his hunger strike in protest at the failure to provide him with any medical care before the SIZO authorities even hospitalized him. Chapukh had suffered a partial stroke soon after his arrest, which left one side of his body incapacitated and his speech impaired.  ‘Court’ after ‘court’ in occupied Crimea ignored his condition and kept him in detention until his blood pressure reached a level where death was very likely.

In the case of 58-year-old Bekir Degermendzhy, the Russian-controlled prosecutors and ‘judges’ were even in breach of Russian legislation.  Degermendzhy has invalid status because of severe bronchial asthma, with this being a condition that should preclude any imprisonment.  During one ‘court hearing’, he needed an oxygen mask, yet the ‘judge’ still extended his detention for a further two months.

Ametov was then 60 and, although his condition was less critical, it was deteriorating and his lawyer, Emil Kurbedinov called his continued imprisonment “slow murder”.

Ametov; Degermendzhy and Trubach were finally released under house arrest in January 2019.   In April that year, they received 3 or 3.5-year suspended sentences even though a different court had confirmed that the entire prosecution was based on a lie and obliged Aitan to return the seven thousand dollars that he had borrowed and refused to repay (that ruling was later revoked, but had, nonetheless, been issued after the real facts were presented.