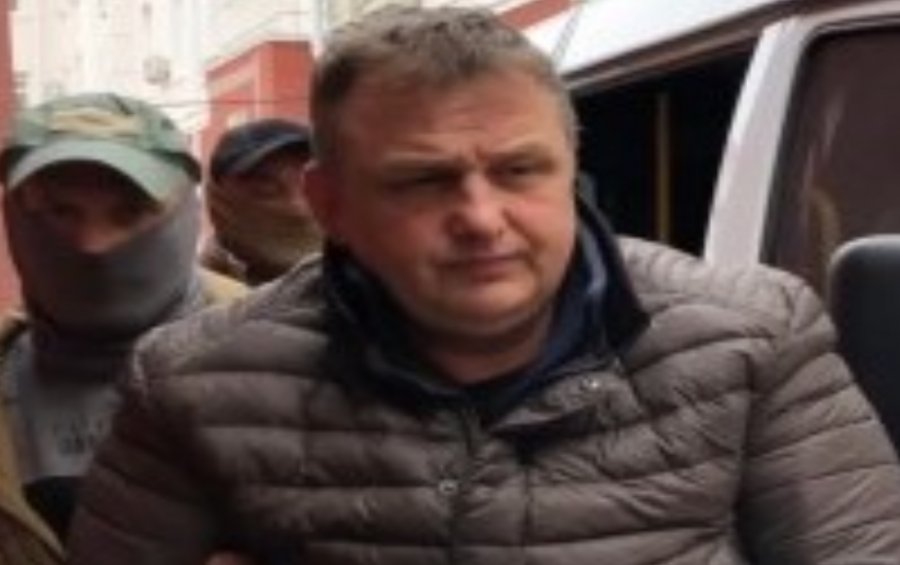 Vladislav Yesypenko from the FSB video

It is almost a month since Vladislav Yesypenko was seized by the Russian FSB in occupied Crimea, yet he has only now been able to speak to an independent lawyer and to inform a Russian-controlled court of the torture he was subjected to, with this including electric currents attached to his earlobes and savage beating.  It was essentially clear from when the FSB released a taped ‘confession’ that this had likely been extracted through torture, but the details are truly shocking. Yesypenko also formally rejected the ‘lawyer’ foisted upon him by the FSB.  This individual, Violetta Sineglazova,  is known for essentially working with the prosecution, rather than defending clients.

The 6 April hearing at the Russian-controlled ‘Crimean High Court’ was behind closed doors, with details made public by Alexei Ladin, a lawyer already representing several Crimean Tatar and other Ukrainian political prisoners.

Yesypenko told ‘the court’ that the torture had continued for two days in some basement to which he was taken after being seized by FSB officers on 10 March.  After attaching electric wires to his ear lobes, the FSB turned on an electric current, gradually increasing the voltage so that he did not get used to the pain.  They also beat him, including his genitals.

This coincides with details which Graty reported on 25 March, citing an unnamed source from inside the SIZO, or remand prison, in Simferopol where Yesypenko is being held.  It is also depressingly similar to the accounts given by other Ukrainians taken prisoner by the FSB who were also shown on Russian or Russian-controlled television ‘confessing’ to working for Ukraine’s Military Intelligence or Security Service.

Ladin adds that the FSB also threatened to kill Yesypenko if he didn’t ‘cooperate’, telling him that it would be reported that he had hanged himself while alone in his cell.

All of this was, Ladin stresses, aimed at extracting a so-called ‘confession’ for the televised ‘interview’ on 18 March in which Yesypenko was supposedly answering questions from Oleg Kriuchkov, general director of the Russian-controlled propaganda channel Crimea24.  Yesypenko has said that he was given a written text that he needed to follow.

All of this was, predictably enough, ignored by the ‘court’, with the appeal against Yesypenko’s detention rejected.  No heed was given either to Yesypenko’s statement that he has serious kidney problems and needs medication.

As reported, Yesypenko disappeared on 10 March, the day after he and Yelizaveta Pavlenko from Alushta took part in honouring the great Ukrainian poet Taras Shevchenko on the 2007th anniversary of his birthday.  Contact with both of them was lost, however it was then learned that they had been seized by masked FSB officers who carried out a search of Pavlenko’s home and took away technology and other items.

Independent lawyers tried to see Yesypenko from 10 March, but were refused access to him.  He has now been able to explain in a written statement  that he was detained on the way to Alushta from Simferopol.  He asserts that the FSB planted a grenade in his car and then put a bag over his head and took him away to a basement, without windows, where  the men, all wearing balaclavas, stripped him naked and then subjected him to the torture described above.  He says that the pain was so intolerable that he was prepared to sign whatever they put in front of him.  He was tortured until he gave the ‘confession’ required, and then taken to Armyansk where the FSB videoed him pointing to what was claimed to be the hiding place from which he had supposedly taken the grenade.

As mentioned, the FSB constantly blocked access to Ladin who was even handed written statements rejecting his services, which were supposedly written by Yesypenko.  It became clear in the courtroom, when Ladin was, for the first time able to speak with the journalist, that this was not the case.  It is typical that FSB-appointed lawyer Sineglazova had not appealed against Yesypenko’s detention and did not even bother to turn up in court.

In his statement, Yesypenko writes that the FSB told him not to hire an independent lawyer and to sign all the ‘confessions’ or else they would torture him again, only this time the electric wires would be attached to his genitals.

“Up till the present day, due to the pressure on me, I was unable to change my lawyer and was forced to sign testimony against myself”.

Yesypenko left Crimea with his wife, Yekateryna and their baby daughter at the beginning of 2015.  The little girl, Stefania is six years old and for the moment has been told only that her daddy, who is usually in touch several times a day, is away on work.

Yekateryna explains that her husband went to Crimea on 23 February, on commissioning from Krym.Realii, the Crimean service of RFE/RL.  Yesypenko wrote articles about life in Crimea.  She says with a sad smile that it is simply absurd to suggest that supposed ‘spy Vladislav Yesypenko’ could be needed to tell Europe and the USA about the lack of water in Crimean reservoirs when this can easily be detected by any satellite.

Yesypenko appears to still be charged under Article 223.1 § 1 of Russia’s criminal code, making firearms or weapons.  As in a number of earlier arrests and videoed ‘confessions’, what the person is forced to ‘confess to’ for television propaganda often bears little relation to the actual charges.

As reported earlier, the propaganda ‘interview’ on 18 March seemed mainly targeted against Radio Svoboda’s ‘Krym.Realii’.  Radio Svoboda, or RFE/RL are referred to as “an American media holding” which is claimed to be “financed and totally controlled by the USA”.   RFE/RL is financed by US federal grants as a private grantee.  Unlike the Kremlin-funded Russia Today, or RT, which really is a propaganda vehicle for the state regime, Krym.Realii, and RFE/RL in general, have their own editorial boards, and are not ‘controlled’ by America.