Russia and its proxy Luhansk ‘republic’ join Belarus in attack on abducted journalist Roman Protasevich Abducted journalist’s life is in danger in Belarus. Not only his while Lukashenko and Putin get away with terrorismBelarus KGB arrest journalist who identified the Ukrainian Berkut helping Lukashenka regime Ukraine protests after Russian-controlled Luhansk militants join Belarus KGB in torturing Protasevich “We’re not celebrating today” – digest of Russian protests (early June 2022)“We can"t clean ourselves from the blood” – digest of Russian protestsRussian soldiers given long sentences in Ukraine for bombing civilian targets in Kharkiv oblast Ukrainian POWs endure horrific torture by Russian captors Civic journalist Iryna Danilovych disappears after being seized in Russian-occupied Crimea Raped, shot and thrown in a mass grave by the Russian invaders who turned Bucha into hell Russian invaders kill Ukrainian journalist Zoreslav Zamoisky in Bucha ‘The enemy was just under our windows…’ – Anastasia from IrpinRussian soldiers risk prison or injure themselves so as to not fight in Ukraine Belarusians name Russian soldiers caught on camera sending goods plundered in Ukraine to Russia Russian invaders mine children’s playgrounds leaving trail of horrific war crimes Ukrainians block "deliveries of death" from Poland to Belarus and Russia, demanding the EU stops trading with killers‘International institutions must protect Ukrainians from abductions and executions’, Ukrainian SCOsEuromaidan SOS Statement on International Support Priorities for UkraineRussia continues its carnage, flouting binding order from ECHR to stop bombing civilians in UkraineRussian schoolchildren told that Russia is bombing and killing Ukrainian children in ‘self-defence’
• Topics / Terrorism 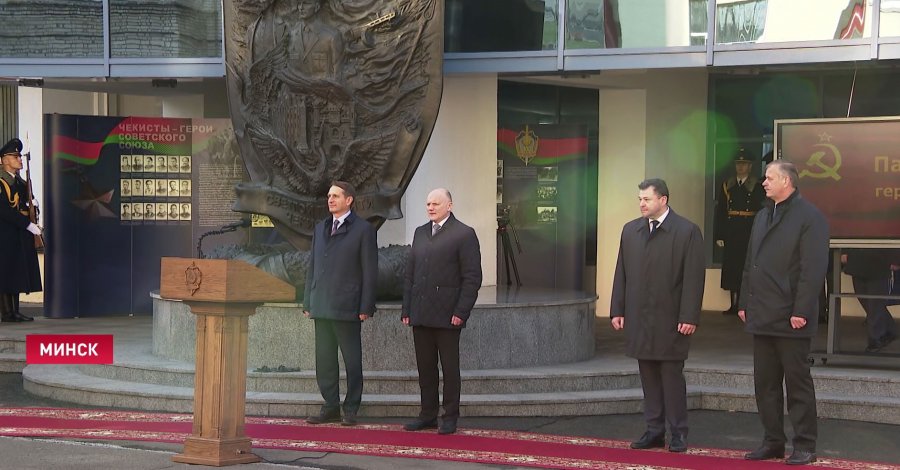 Russia and Belarus have agreed to jointly counter “the West’s destructive activities” aimed at “destabilizing the situation” in the United State of Russia and Belarus.  The high-level meeting came just over a week after Belarus hijacked a European plane to seize opposition journalist Roman Protasevich.  This brazen act of air piracy resulted in consequences for Belarus, though none for Russia, despite widespread acknowledgement that Belarusian dictator Aleksandr Lukashenko would not have acted without at very least permission from Moscow, and despite the Director of Russia’s Foreign Intelligence Service boasting of just such close cooperation.

On 3 June, Russian and Belarusian state-controlled media cited the Belarusian KGB’s press service in reporting the meeting in Vitebsk between KGB Head, Ivan Tertel and Sergei Naryshkin, Director of Russia’s Foreign Intelligence Service.   The men noted “the importance of consolidating efforts aimed at strengthening Moscow and Minsk’s potential in countering global challenges and new threats to the United State’s security”.

At an earlier meeting in Sochi on 28 May between Lukashenko and his Russian counterpart, Vladimir Putin, Putin had played down international outrage over Belarus’ use of a ‘bomb threat’ to force the Ryanair plane to land in Minsk and seize Protasevich and his Russian girlfriend, Sophia Sapega. Russia also made its support for Belarus clear by refusing to allow planes that had avoided Belarus from landing in Moscow.

There was an even more menacing message from the meeting on 3 June.  Naryshkin told RIA Novosti that the two countries’ security services had increased “analytical and information cooperation”.  They have “a huge volume of information”, he said, which they used “for work on certain subject matter”, with such “mutual cooperation between Russian Foreign Intelligence and the Belarusian KGB on ensuring external security” being particularly important in the present circumstances when, he claimed, “the issue of protecting our sovereignty is acute”.   He says that Moscow and Minsk view the West’s actions against them as “elements of hybrid war”, which he called “truly aggressive and aimed against Russia and Belarus’ sovereignty”.  Russia would not tolerate this, he added.

Russia is certainly helping the Lukashenko regime to persecute its opponents.  In April, Lukashenko claimed that an attack was being planned, “by foreign security services”, on his life and that of his two sons. Two alleged ‘suspects’ – Aleksandr Feduga, a political analyst and lawyer Yury Zenkovich were detained in Russia as part of a joint ‘special operation’ between the FSB and KGB.  They are now accused of a conspiracy to seize power by unconstitutional means.

Belarus has already one helped Russia’s FSB to abduct a Ukrainian teenager with life-threatening health issues who was subsequently sentenced to six years’ imprisonment in Russia on preposterous ‘terrorism’ charges, based on Skype conversations between the Ukrainian student and his 17-year-old Russian schoolgirl friend. Pavlo Hryb was only freed because the Kremlin agreed to exchange a number of Ukrainian political prisoners for MH17 suspect, Vladimir Tsemakh.  Worth noting that two other Ukrainian political prisoners - Akhtem Chiygoz and Ilmi Umerov – were probably released into exile in a three-way deal in which Turkey freed two suspected Russian state assassins.

Both countries are known to have used hired killers of one sort or another against the regime’s ‘enemies’ in other countries.  In Russia’s case, it has used radioactive polonium to ostentatiously, and agonizingly, kill Alexander Litvinenko in London. One of the believed murderers, Alexei Lugovoi, was later given a state honour by Putin and is now a deputy in Russia’s State Duma.  In 2018, two Russian Military Intelligence [GRU] officers failed to murder Sergei Skripal and his daughter in Salisbury, UK, but did murderer another woman.  They used the prohibited nerve gas Novichok, recently used in a murder attempt on opposition leader Alexei Navalny.

These are only the most notorious of a large number of such state killings.  There are also grounds for believing that Belarusian KGB were behind the killing of Belarusian journalist and former political prisoner Pavel Sheremet in Kyiv on 20 July 2016.

The meeting on 3 June made it abundantly clear that Moscow and Minsk will engage in joint ‘special operations’ against those they regard as their ‘enemies’.  That message was delivered soon after Lukashenko had demonstrated that this would not preclude an act of international terrorism and after Russia, both politically and through propaganda, had come out on Minsk’s side.

There are evident economic reasons why Germany and some other western countries are choosing to ignore this, and why even the use of an internationally prohibited nerve gas against Navalny and then his imprisonment when that failed is not stopping Germany’s collaboration with Russia on Nord Stream 2.

There is no justification for calling Lukashenko a dictator but maintaining some kind of pretence about ‘President’ Putin, and none at all for believing that any country’s borders will be respected if Russian or Belarusian ‘security services’ are free to send hit squads  and use international airliners against those they see as their enemies.