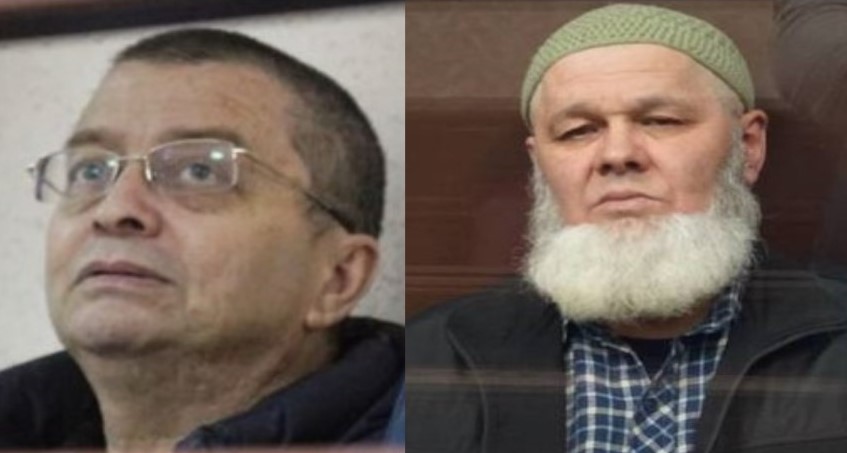 Two of Russia’s oldest Crimean Tatar political prisoners were hospitalized last week after a court hearing needed to be adjourned because 61-year-old Servet Gaziev was in agonizing pain and couldn’t stand.  Russian doctors are nervous of taking decisions in keeping with their Hippocratic oath when it comes to political prisoners, and only 59-year-old Dzhemil Gafarov, who has life-threatening medical conditions which, even according to Russian legislation, should preclude detention, was kept in hospital.  Despite acute pain and high blood pressure, Gaziev was sent back to the Russian SIZO [remand prison], where the conditions are tantamount to torture.  If the person seems likely to survive to the end of their shift, the medical staff presumably prefer to avoid annoying Russia’s FSB and prosecutors.

His condition has worsened over the last two years in detention, with the kidney failure also prompting the development of very painful gout and the likelihood of heart attacks. It was seemingly a heart attack that led the authorities to finally, and urgently, get him to hospital after the hearing on 10 June. According to his lawyer, Rifat Yakhin,  he will be passing on all of the medical documents on 17 June, with a decision due on 18 June as to whether to at least place him under house arrest.  It is unfortunately not all guaranteed that a Russian court will decide in accordance, not only with international law, but even with Russian legislation.  If it does not, Gafarov will be returned to the SIZO where his life will be in immediate danger.

Gafarov took part in the 17 June hearing by video link from the hospital. He explained to the court that he had been informing the SIZO of his appalling state of health since February 2020, but no attempt had been made to provide medical care.  Instead he had taken the medicine that his family had been able to get to him. In the hospital, he said, he does not have any necessary items.  He stressed that he had been placed in detention having third grade disability status, with his health having so deteriorated since that he now has the more severe Grade 2.

Yakhin has on many occasions complained that SIZO doctors avoid providing medical information both to Gafarov himself, and to his lawyer.  There was a sharp deterioration in Gafarov’s health in December 2020, shortly after the same doctor who had concealed information also refused to hospitalize Gafarov and order a proper examination.  At the time, Gafarov was experiencing excruciating pain in the joints of both feet, and clearly needed specialist attention.  His kidney disease means that he requires a special diet which, in the SIZO, is simply impossible.  One of the reasons for the attacks of gout, or inflammatory arthritis is that his kidneys are unable to get rid of uric acid which instead builds up in his body

Despite his condition, Servet Gaziev was taken by convoy to the Southern District Military Court in Rostov-on-Don on 17 June. He was, however, removed from the court after he twice answered questions in Crimean Tatar.  His sister, Svetland Ablyamitova, who as a doctor understands how dangerous the situation is, reported that the presiding judge, Valery Opanasenko, claimed that her brother was speaking “a foreign language”.  He was not, she points out, since Crimean Tatar is an official language in Crimea, together with Ukrainian and Russian.  “It is easier for my brother to express himself in his native language, as he does not know Russian well. However he was refused an interpreter. A Crimean Tatar interpreter is needed not for my brother, but for the judge, prosecutor and defence in order for them to understand the defendant”

She says that Gaziev was taken to hospital on 10 June where a blood test was taken.  A surgeon was called, who felt around Gaziev’s stomach and liver  and, saying nothing, went away.  No ultrasound tests were taken, although Gaziev’s condition has led to his needing ambulances to be called to the court five times over recent weeks. The next day, he was simply sent back to the SIZO. Is that what they call “curing” somebody, his sister asks bitterly.

Russia is directly jeopardizing the life of Dzhemil Gafarov and Servet Gaziev, although neither they, nor the other 23 Crimean Tatar civic journalists and activists, ‘on trial’ with them are accused of any recognizable crime, let alone one that would warrant such treatment.  All the Crimean Tatars arrested either on 27 March 2019 or, in the cases of Rayim Aivazov and Eskender Suleymanov, soon afterwards, are charged solely with ‘involvement’ or ‘organization’ of a Hizb ut-Tahrir group.  This  is a peaceful, pan-Islamist party which is legal in Ukraine.  In 2003, Russia became the only country in the world (since 2016 joined by the even more repressive Uzbekistan) to call Hizb ut-Tahrir ‘terrorist’.  No adequate reason was ever provided for so labelling an organization which is not known to have carried out acts of terrorism anywhere in the world, yet since 2014 Russia has been using the 2003 Supreme Court ruling as pretext for imprisoning men for up to 24 years without any crime.

UPDATE  Despite the condition of both Gafarov and Gaziev,  on 18 June, judge Opanasenko extended the detention of all the men.

PLEASE HELP by seeking reaction from politicians and human rights NGOs in your country, and by circulating information about this infamous attempt to imprison men for up to 20 years for their civic activism.

Please also write to the men.  The more letters they receive, the more Moscow will understand that its torment of men like Servet Gaziev and Dzhemil Gafarov is under scrutiny.