Ukrainian gets jail sentence in Russia for involvement in a legal organization in UkraineUkrainian jailed as ‘extremist’ in Russia for a Facebook post asking for tyresUkrainian abducted to Russia faces ‘trial’ for protest in Ukraine against Russian occupation of CrimeaRussia abducts Ukrainian soldier for new ‘Right Sector’ show trialRussia abducts activist from Ukraine, charges him with involvement in Ukrainian organizationThreats against Crimean political prisoner sentenced to 14 years for pleading innocent So what will “New SBU” be?What is wrong with the bill on SBU?A brief description of the KHPG strategic litigations in July–December 2020Prisoner exchanged for Ukrainian hostages gets 17-year sentence in Russian proxy Luhansk ‘republic’The practice of application of Article 111 of the Criminal Code of UkraineRussian prevented from appealing against 9-year sentence for supporting UkraineVoices for Freedom – Show Kremlin hostage Volodymyr Dudka and Russia he’s not forgottenRussia seeks surreal 8-year extension to sentence against abducted Ukrainian political prisonerA brief description of the KHPG strategic litigations in January – June 2020The price of PACE capitulation to Russia: Soaring number of Crimean Tatar and other Ukrainian political prisonersПраво на охорону здоров’я у в’язницях протягом пандемії COVID-19Russia has no problem with the torture and killing of a 16-year-old Ukrainian schoolboyCrimean Tatar political prisoners punished for refusing to take part in Russia’s ’forever Putin referendum’COVID-19 crisis threatens democracy, leading world figures warn
• Topics / News from the CIS countries 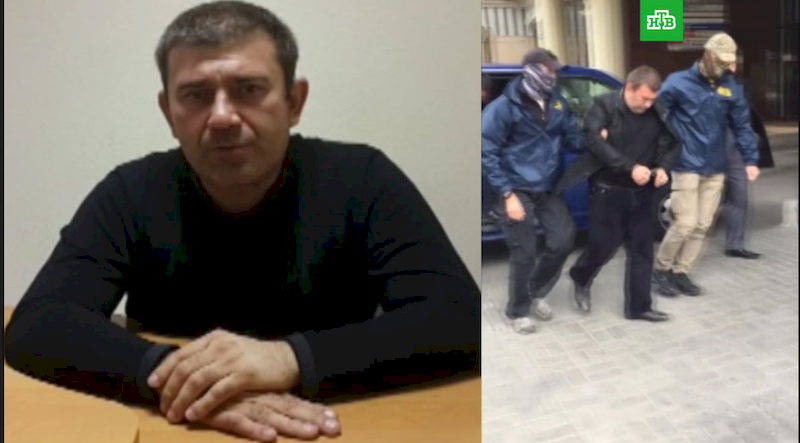 Roman Ternovsky has been declared a political prisoner after being jailed by Russian courts for taking part in peaceful protests in Ukraine as a member of a legal Ukrainian organization.  The Memorial Human Rights Centre calls the case another demonstration of Russia’s ‘witch hunt’ against the organization in question, ‘Right Sector’, noting that Ternovsky had been convicted in the absence of any crime.

As reported, Ternovsky was arrested in the Rostov oblast (Russia) where he had been living in October 2017, with the Russian Investigative Committee not even trying to come up with any sensible charge.  Its report claimed to have established that “as a member of Right Sector, he took part on many occasions in pickets, protests and other mass events on the territory of Ukraine”.

He was also ‘accused’ of using a Facebook page to carry out what the report termed  ‘propaganda of Right Sector activities’.  Such social media activities were, it was noted, available to “people permanently resident in the Russian Federation”.

This Investigative Committee opus then went on to claim that “Ternovsky’s above-listed activities were directed against the interests of the Russian Federation and are classified by the investigators under Article  282.2 § 2 of Russia’s criminal code, namely participation in an ‘extremist organization’.

The ‘evidence’ appeared to be items of clothing and other personal things with Right Sector symbols.

On 28 June 2018 Terrnovsky was found ‘guilty’ of involvement in a Ukrainian organization in Ukraine and sentenced by the Pyervomaisk District Court in Rostov on the Don to two years and three months.

Very little was even known about the 42-year-old from the Kharkiv oblast who had moved to Russia in December 2016.  It is likely that Ternovsky admitted the charges after being offered a shorter sentence if he pleaded guilty. This meant that the ‘trial’ took place without questioning of witnesses or examination of the ‘evidence’.  For no obvious reason, it was also held behind closed doors.

While admitting the charges, Ternovsky did dispute the sentence handed down by judge Lyudmila Yordanskaya and lodged an appeal, which was rejected.

Memorial HRC writes that, after closely studying the material of the case, they have concluded that Ternovsky was effectively accused only of taking part in peaceful demonstrations and other forms of legal civic activities on Ukrainian territory.

While Article  282.2 does allow for a person to be charged merely with involvement in a banned group, Memorial points out that a crime, according to Russia’s criminal code must involve actions which present a public danger.  They do not see any evidence that the activities of Right Sector in Ukraine are aimed “at the violent change in the foundations of the constitutional order and violation of the integrity of the Russian Federation and the undermining of the state’s security”.

The arguments given in the ruling of Russia’s Supreme Court on 17 November 2014 when it banned Right Sector do not withstand any criticism, being based on suppositions and unproven facts, including a fake document.

“The fight against Right Sector is one of the varieties of ‘witch hunts’ in modern Russia”, Memorial HRC writes.

It is likely that Ternovsky moved to Russia to be near his wife or partner. Memorial reports that he has three children, though he is not formally registered as the father.

He was a member of the Kharkiv oblast branch of Right Sector from September 2015. During the ‘trial’, he said that he had been involved in ‘propaganda’ and collecting money for the organization, organized the printing of material, took videos and arranged demonstrations.  All of the activities were legal, and videos of many of them were posted on YouTube.

Russia’s Investigative Committee initiated criminal proceedings under Article 282.2 § 1 (organizing the activities of an extremist organization) on 30 September 2016 against various purported leaders of Right Sector.  It seems that Ternovsky was targeted from April 2017, though only arrested on 12 October 2017.

Russia has now ‘convicted’ two Ukrainians of involvement in Right Sector in Ukraine, with Mykola Dadey sentenced to 18 months’ imprisonment on 21 May 2018.

The ‘trials’ are still underway of Oleksandr Shumkov who was almost certainly abducted to Russia from Ukraine (details here), and Russian Denis Bakholdin, a fierce critic of Russia’s aggression against Ukraine who had been living in Ukraine since 2014 (details here).

All four men have now been recognized by the Memorial Human Rights Centre as political prisoners.