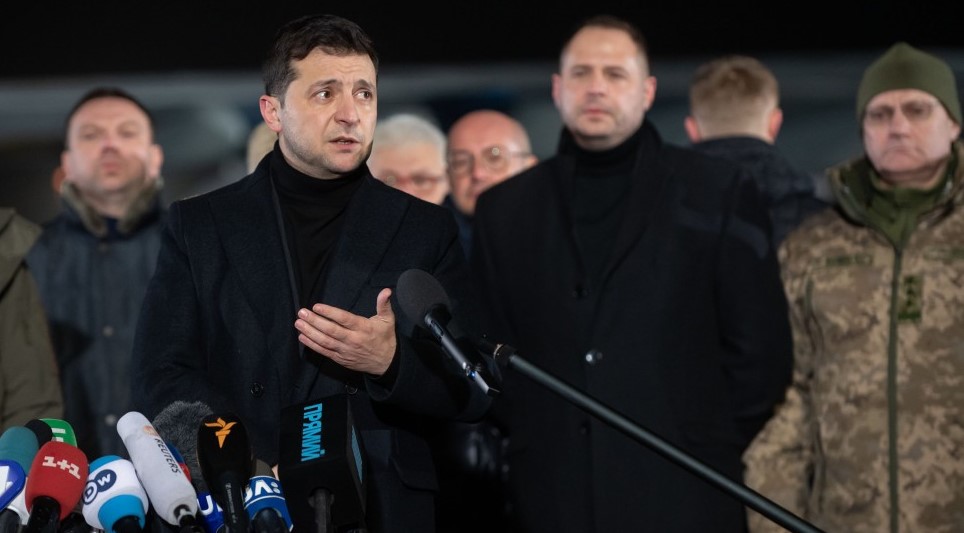 Boris Gryzlov, Russia’s representative at the Contact Group on Donbas, has asserted that Ukraine agreed to not ‘persecute’ those released as part of the 29 December exchange of prisoners.  This would include the five former Berkut officers who were charged with gunning down at least 39 Maidan activists on 20 February 2014.  This directly contradicts what Ukrainian President Volodymyr Zelensky and the Prosecutor General Ruslan Riaboshapka have claimed, and clarity from them on what exactly was agreed is urgently required.  Russia has already gained a major victory through its demand that the five Maidan suspects were included in the exchange list, and it is quite possible that it is now seeking maximum mileage in fostering distrust of Ukraine’s leaders.

As reported, judges from the Kyiv Court of Appeal were involved for two days in a staged performance of an appeal hearing with a politically commissioned conclusion, namely the release late on 28 December of all five of the ex-Berkut suspects.  It is now reported that the release of three POWs held by the Russian-controlled ‘Donetsk people’s republic’ since January-February 2015 (Serhiy Glondar; Oleksandr Korinkov and Bohdan Pantyushenko) was made contingent upon the release of the suspected Maidan killers.  Zelensky himself has defended what he admits was a political decision and has said that he would hand over 100 Berkut men to free an intelligence officer.

Glondar is tonight getting to know his second daughter who was born after he was taken prisoner and all three men are safely at home with their families. That is a very big thing.

This being said, there remain very many questions.  Zelensky’s acknowledgement that this was a political move should have been made before the families of the slain Maidan activists were put through the torment of a two-day farcical appeal hearing with a pre-determined conclusion.  Nor was it only the judiciary that was held hostage to the situation.  Riaboshapka announced on 28 December that the prosecutors who had run the case from the beginning were being replaced by people who knew nothing about it.  Since it became clear that the men had been included in the exchange list and handed over, first Riaboshapka, then Zelensky have claimed that the men’s trial will be continued in absentia.  This already begs the issue of why the prosecutors were changed.  It is possible that this was because the former prosecutors from the now dissolved Special Investigations Department themselves refused to continue the trial in absentia, given serious concerns about Ukraine’s legislation on such trials.  There was nothing to stop this being admitted in advance.

Given the lack of any openness,  there can only be serious concern when Russia claims that a still further concession has been made, one that would undermine the assurances given by Ukraine’s President about the continuation of the trial.

It was known that Russia and the so-called ‘republics’ had insisted that all criminal charges needed to be wiped from their candidates for exchange, and that this had led to the 18 December meeting of the Contact Group ending in failure.  Since it was announced on 23 December that agreement had been reached on an exchange before the end of the year, it seems likely that the release of the suspected Maidan killers was a part of that agreement.

So was wiping their slate clean also part of the deal?  That is what Russia is claiming.  It is also suggesting that it now expects ‘progress’ in Ukraine’s inclusion of ‘special status’ for the Russian-controlled ‘republics’ in Ukraine’s Constitution.  This is something that is totally opposed by a majority of Ukrainians.

If the political decision which Zelensky decided to take included a stipulation that any waiving of criminal prosecution would not apply to the Maidan suspects’ trial, he should clarify this immediately.  It would also be appropriate for him to indicate what red lines cannot be crossed under any circumstances, however many imprisoned Ukrainians Russia uses as hostages.  Given the certainty that the Kremlin will not stop at any measures in order to deepen divides and destabilize Ukraine, and that it will continue seizing prisoners in occupied territory, clarity on such red lines is imperative.