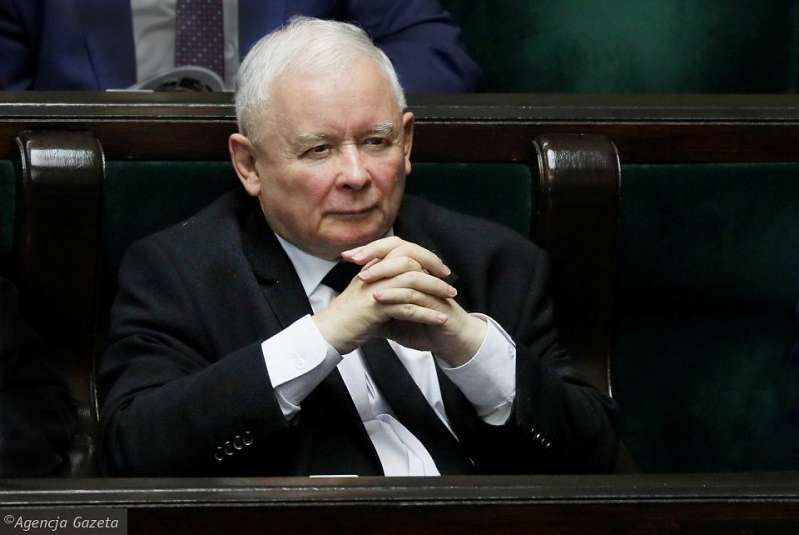 Poland’s increasingly undemocratic ‘Law and Justice’ [PiS] government has voted to allow the presidential elections, which were scheduled for 10 May, to be held by postal vote, possibly a week later.  Any changes to electoral law are illegal in the six months before an election, and this is only one of the numerous ways in which the ruling party is violating fundamental principles of democratic elections in order to cling on to power.  Some are even more shocking, since the government has stubbornly refused to declare a state of emergency or natural disaster in response to the mounting numbers of Covid-19 infections since that would enable the presidential elections to be postponed.  This refusal, and the reduced frequency with which the number of people infected and of fatalities are reported by the Health Ministry, have understandably elicited accusations that PiS is playing with people’s lives in order to hold on to power.

Jarosław Kaczyński, the 71-year-old leader of PIS, had been insisting until fairly late last week that the elections must take place on 10 May. The reasons for wanting this are clear.  The current President, Andrzej Duda, elected as PiS candidate in 2015,  has proven disturbingly willing to support any PiS legislative and other initiatives, however glaringly unconstitutional and undemocratic.  It is due to the laws aimed at crushing the independent judiciary in Poland, which he signed into force, that the European Commission in December 2017 enacted Article 7  for the first time ever, over rule of law concerns in Poland.

Duda has been equally willing to see TVP, the supposed public broadcaster, turn into a mouthpiece for PiS.  On 6 March, he signed into law a highly controversial bill giving an incredible two billion PLN to TVP, despite calls to finance cancer treatment in Poland which is in a dire state.  This was extremely unpopular, especially following the storm when a PiS MP was videoed giving the finger to the opposition after PiS had managed to overturn the Senate’s rejection of the bill.  With TVP behind him, Duda was still getting good ratings, but his victory was not guaranteed.   This changed as Covid-19 began to hit hard in Europe and restrictive measures were applied in Poland.  These restrictions, as well as the fact that there really is only one issue at the moment, mean that no political campaigning was possible.  Except for Duda, who has been able to use his position as President to appear constantly on television, to be shown together with the Prime Minister talking about fighting  coronavirus, etc.  Other candidates have, at most, been able to express their opinion about elections or the anti-crisis measures, and there can be no suggestion that all candidates are in with a fair chance.

Duda’s victory will be much more problematical once the economic fallout from the pandemic really hits.

As it became increasingly clear how bad it looked to insist on personal voting in the middle of a pandemic, PiS first illegally added provision for some postal votes in an anti-crisis law.  It then proposed to widen the scope, introducing postal voting for whoever did not want to risk being infected with Covid-19 by voting in person.  They finally moved to a postal vote for everybody.

All of this seemed grotesque against a background of mounting infections and deaths, as well as present and looming economic hardship with huge numbers of businesses unlikely to survive the crisis.  It was, however, difficult to dismiss them as abstract plans to be corrected by brutal reality when one very direct result was the replacement of the head of the Polish Postal Service with a Deputy Minister of Defence.  Since the postal service would play a critical role in delivering and collecting votes, the appointment of a PiS politician as its head hardly inspires confidence in ‘free and fair elections’ by post.

Essentially nothing could inspire trust in such ‘elections’.  As constitutional expert,  Professor Marcin Matczak notes, the holding of any elections where people send their vote, albeit in an enclosed envelope, together with their personal data, violates the principle of the confidentiality of the ballot box.  There have been suggestions that those not supporting the PiS candidate might well feel concerned that their opposition would be ‘noted’.

In another tweet, Matczak writes that: “You have to hate democracy to organize elections when we know now that they will break all records from the point of view of electoral protests.  What is the point of electing a President if you’re sure that every element of this election is flawed?  So as to fight with your People for the next five years?”

PiS has been introducing highly unconstitutional bills late in the evening since 2015.  This time, there had seemed a small degree of protest within the PiS coalition, however towards evening on 6 April, a new bill was introduced.  Within around four hours, this had been voted in,  with even the Health Minister, Łukasz Szumowski, who is himself a doctor, obediently voting for a bill that must inevitably clash with all his advice to Poles and his professional understanding of the situation.

PiS is well aware how many people are opposed to these ‘elections’ and plan to boycott them, and in a first version of the law proposed up to 3 years’ imprisonment for not returning the ballot papers.  The punishment remains the same, but the words have reportedly been modified to read: “anybody who destroys, damages, conceals, redoes, falsifies or steals a ballot paper”.  Does this mean that somebody who holds on to their ballot paper, because they do not regard this as a real election, can be said to be concealing it?  Among the 30 million eligible to vote, a significant percentage are likely to lose their right to vote because the electoral pack goes to the wrong address.

After having repeatedly claimed that it is impossible to change the date of the elections, because this would be ‘unconstitutional’, the bill now proposes to allow the (PiS) Speaker (marszałek Sejmu) to postpone the elections as long as they fit in with the term stipulated by the Constitution.  The Sejm’s legal department earlier stipulated that such a postponement could only take place if a state of emergency is declared.  PiS had and is refusing to do this, while imposing its own, undemocratic, procedure.   The Minister for State Assets, Jacek Sasin, a person known to be close to Kaczyński and anything but apolitical, is to be in chargé of resolving all the multiple issues that will arise over the organization of this event.

The current electoral commissions will be dissolved and new smaller ones created.  In fact, the numbers would still enable the spread of Covid-19, while there must be questions over how the independence of such commissions is to be guaranteed, when so few people are willing to take part because of the pandemic.

Virtually all of the vital safeguards, as well as the fundamental components, of fair elections seem in danger, but that is most unlikely to worry those pushing to hold the elections in the middle of a pandemic.

The bill is now due to go to the Senate in which, since October last year, PiS does not have a majority. The Senate can, however, only hold it up, with it eventually returning to the Sejm, where PiS can knock down any amendments with a simple majority.  The bill will then go to Duda, for whom this is his best chance of winning. This would, however, be a very questionable victory,