On Sunday morning police set up a thick police cordon around the tents erected by people protesting against the arrest on Friday of former Prime Minister and leader of the opposition Batkivshchyna / BYUT party and faction in parliament, Yulia Tymoshenko.  Associated Press reports about 200 protesters.

A BYUT National Deputy, Serhiy Mishchenko reported in the morning that the court order passed by the District Administrative Court at 1 a.m. on Sunday morning banning all peaceful assembly in the relevant areas had contained a contradiction. , it transpired that there was some confusion. The order was to come into force in 10 days yet it already had the court’s stamp meaning that it should be enforced immediately.

“A decision was passed to lodge an appeal against the court order and in accordance with legislation, from the moment that the appeal is received, the court order is suspended”.

A Party of the Regions representative, Oleh Kalashnikov, arrived at around 5.30 a.m., accompanied by police, and stated his intention to hold a counter-protest outside the court.

A Channel 5 correspondent reported later in the day that the police were helping the Regions Party supporters spread, positioning themselves on the pavement and road and slightly squeezing out the protesters against Yulia Tymoshenko’s arrest.  Channel 5 says that the traffic police actually called a machine to have a car parked on the pavement near the court moved by a few metres.

There has been no conflict between the different demonstrators.

The BBC Ukrainian Service notes that the court ban did not anyway cover National Deputies receiving members of the public in the tents [the official pretext for the erection of the tent camp – translator].

There are around 100 police officers and Special Force officers surrounding the tents.  It is reported that around the court there is a special police car with equipment for recording what is going on.

From the reports mentioned above, photo from the BBC Ukrainian Service 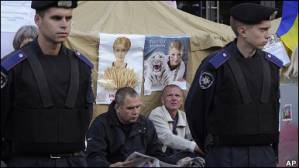