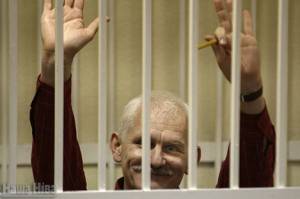 The trial began in Minsk on 2 November of Ales Bialiatski, Head of the Viasna Human Rights Centre and Vice-Director of the International Federation for Human Rights.  He is facing a possible sentence of 7 years for alleged tax evasion.  The charges are over accounts which Ales Bialiatski opened and used to transfer money from abroad to Belarus to help victims of political repression, since Viasna has been officially closed by the Belarusian regime.

Both the Lithuanian Justice Ministry and the Polish Prosecutor General’s Office gave information about accounts to the Belarusian authorities. This led to outrage in both countries which have since apologized.

Since foreign human rights defenders are being prevented from attending the trial, we will be posting information as it becomes available. The following is from the Viasna website

First Day of the Trial

Extraordinary precautions were in force from 9 a.m. near the Moskovsky District Court in Minsk, with Special Force police officers and traffic police deployed.  Ales Bialiatski was brought to the court at 9.30.

Journalists without journalist ID  weren’t allowed into the court.  Those present included leaders of civic movements and parties and representatives of foreign diplomatic missions.  Two civic activists were removed because of the T-shirts they were wearing which said: Freedom of Ales Bialiatski.

The Prosecutor Zaikouski read out the charges to Bialiatski. He is accused of not paying 352, 274, 000 rubles in taxes, this constituting an especially large-scale loss to the state. The prosecutor cited a number of accounts in the Nordbank (Lithuania) and Bank Śląski (Poland).
Ales Bialiatski described the history of the Viasna Human Rights Centre. He explained that the organization had been formally dissolved and all attempts to get state registration had been unsuccessful. Ales Bialiatski had therefore owned two accounts – in Poland and Lithuania, in order to receive means for human rights activities from international partners of “Viasna”.  The money was passed on to Viasna for specific projects.

: “I was the owner of the account, but the money was spent on activities of “Viasna” and our partners in Belarus. I didn’t use the money for my own purposes – there were agreements drawn up indicating what the money was to be spent on. Samples of such agreements have been passed to the KGB.  There were other documents as well.. I wasn’t the owner of the money, but an intermediary. The funds were spent to pay for Viasna Public Advice Centres and to help victims of political repressions. Reports about the use of the money for tickets, the publication of bulletins and support to victims of political repressions were submitted to our international partners. Moreover, not all of this money was spent in Belarus, a part of it was spent abroad, on printed production and education. I don’t see any profit received by me from this money. I did not personally bring it to Belarus.”

The Ambassador of Poland, Leszek Szerepka, came to the trial, as Poland not only perceives the evident political motivation of the trial, but also feels personal guilt for Ales Bialiatski.
“Being representatives of the European Union, we have always tried to participate in all politically motivated trials. I think that this trial is of such a kind. We can see many representatives of different diplomatic missions there. We also have personal responsibility, as partially we are to blame that Mr. Bialiatski is kept in jail. The Belarusian side abused our trust, as the law which we had signed was aimed at combating hard crimes, whereas here it is used to imprison a human rights defender. We think that the imprisonment of a human rights activist is unacceptable, ” reports Radio “Racyja”.