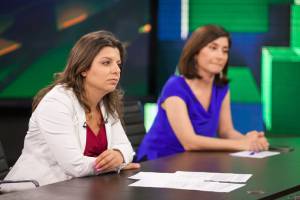 Margarita Simonyan, Editor of the Russian state-funded English-language channel  RT [formerly Russia Today] has claimed that the accusations against the channel are ‘biased’.  She was responding to the damning report and warning issued by Ofcam, the United Kingdom’s broadcasting regulator.  Ofcom has placed  RT ‘on notice’ , warning its licence-holder TV Novosti that it will face sanctions or other regulatory measures if it continues to provide biased, unbalanced and inaccurate material.

“We haven’t had time to launch our TV channel in Britain and they’re threatening to deprive us of our licence on biased charges. That’s democracy for you.

They consider that our coverage of Ukraine was biased. We found a tonne of examples of biased coverage of Ukraine on the BBC and phoned Ofcom. They answered that Ofcom monitors all channels EXCEPT THE BBC!  And you can only complain about the BBC to the BBC itself.

I don’t know if the great Englishmen Orwell and Huxley are turning in their grave, but there are graves. The accusations against us of bias, and total disregard for the BBC’s overt bias is nothing more than obvious censorship. Ofcom is not even concealing that it is trying to force us to change our editorial policy. “

Simonyan vows that they will not change their editorial policy and claims that “we are the only source of alternative information for our British audience and will remain such”.

Simonyan was more open than in a statement presumably issued to the press on Monday where she says:

“We accept the decision of Ofcom to have held, in effect, that a government’s viewpoint must always be reflected and given due weight when it is criticised in the reporting of major political controversies.”

Ofcom is assuredly not concealing its wish for RT to change its editorial policy, nor does a reading of the document in question suggest that the regulator’s only concern is that the Ukrainian government’s position is not presented.

Its concerns cover, for example, the fact that in most of the reports, the Kyiv government is referred to as a ‘putsch’.  The assessment is well worth reading in full.

Three people are reported to have complained about news bulletins on March 1 and 3 this year.  They pointed out critical remarks about the interim Ukrainian government “including allegations of far right-wing influence on the new administration in Ukraine.”

In its report, Ofcom provides a transcript of material which in tone and content differs little from most other material seen by observers following RT and other Russian media since early this year.

It finds the news bulletins to have “raised issues warranting investigation” under the rules of the Code on due accuracy; due impartiality; and range of views (or, in RT’s case, lack of such).

TV Novosti, asked for its response, made assurances about treating “the issue of due impartiality with the utmost seriousness” and stated that RT aimed to provide: “an alternative perspective on major global events and to acquaint international audiences with the Russian viewpoint”.  and that is what [RT’s] audiences expect”. It added that RT: "delivers stories often missed by the mainstream media to create news with an edge”.  It claimed that the alternative viewpoints provided by RT are: "not limited to the Russian viewpoint”.

“It would not further the interests of citizens to inhibit broadcasters from seeking to challenge established Western views, particularly in the current climate, by excluding the Russian viewpoint...[and] audiences would lose out if the Western viewpoint were a fugitive and cloistered position that never ventured out to be tested adversarially in public debate against an opposing view”. In the Licensee’s view, therefore: “Democratic debate would be diminished if audiences were to be deprived of insights into the Russian viewpoint”.

Ofcom is obliged only to consider RT’s compliance with its licence in the UK, and could not be expected to comment on other matters.  RT’s lessons about ‘democratic debate’, for one, should be considered against the background of all Russian state-run television which gives anything but unbiased ‘insight’ into viewpoints other than that espoused by the Kremlin.

Ofcom’s analysis of the claims and the actual material in the context of the European Convention on Human Rights and its own code of standards is thorough.  The Committee concludes that the reports did not show due impartiality and that in all the bulletins it reviewed, there was only one case where the views of the interim government could be said to have been presented.

Ofcom, in its conclusion, “ruled that RT/TV Novosti, had failed to preserve due impartiality as required by Section Five of the Code and the four news bulletins detailed in this finding therefore breached Rules 5.1, 5.11 and 5.12 of the Code.”

"Therefore, as a result of the current case, we are putting TV Novosti on notice that any future breaches of the due impartiality rules may result in further regulatory action, including consideration of a statutory sanction."

The breaches in question were from early March, so the scope for complaint is great.  So too is the need.  Mashable reports that the percentage of people in the UK who use RT for news fell from 2% in 2013 to 1% in 2014.

That is still quite some number if you consider that the material is often inaccurate, manipulative and aimed at inculcating destructive stereotypes.

Some of its most flagrant breaches of all broadcasting standards are first produced and shown, and then removed, after enough people have viewed them and enough copies have been made.

This was the case on July 13 with a supposed documentary which claimed that ’the junta’ in Kyiv and its ’Nazi mercenaries’ are carrying out genocide, ethnic cleansing and starving its population, while children are being taught Nazi slogans and salutes.

This went on to assert that eyewitnesses had spoken of “unarmed civilians being systematically massacred – village after village, town after town - all under complete mainstream media silence”

RT claimed that Kyiv was carrying out daily mass bombings of unarmed civilians.  They were ‘reportedly using “cluster bombs designed to kill or maim everyone in the surrounding area”.

Some viewers have said that they enjoy seeing something so obviously a counter to western media outlets.  They do, however, watch both and presumably can recognize the lies.  RT is standardly provided in hotels as one of the available English-language channels.  The chances that viewers are aware that they are receiving inaccurate information and manipulative propaganda are not high.

It is likely that new infringements can only be reported after Ofcom’s warning was issued.   The channel’s staff are not paid fat salaries to tell the truth and finding new examples of bias should be no problem.

The danger of RT should not be underestimated.  It certainly is not by the Kremlin which has recently seriously increased the funding for RT and its international propaganda machine.