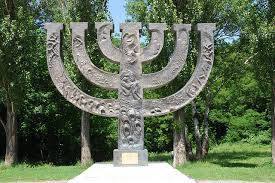 This attack at the site of a terrible Nazi crime comes just days after prominent Ukrainian Jewish organizations warned of the need for vigilance, calm and unity in the face of a dishonest propaganda campaign around anti-Semitism in Ukraine and likely attempts at provocation

Vandals have desecrated the Menorah which forms part of the Memorial at Babyn Yar, the site where at the end of September 1941 the Nazis murdered over 33 thousand Jews.

The Euro-Asian Jewish Congress reports that the attack was discovered on Nov 17 and the police have been informed. 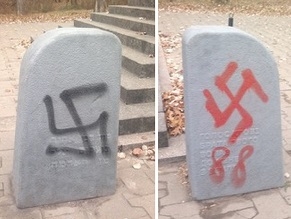 The paint has hopefully already been removed, but the photos by Anna Lentkovska from the Congress of National Communities of Ukraine show that swastikas were  daubed in red and black paint on stones around the menorah.  The culprits added ‘88’ which in the neo-Nazi youth subculture is a coded form of ‘Heil Hitler’  [‘h’ being the eighth letter of the Roman alphabet].

As reported, the head of the National Minority Rights Monitoring Group, Viacheslav Likhachev, who has been monitoring anti-Semitism and xenophobia in Ukraine for over 10 years, has noted an increase in cases of anti-Semitic vandalism over the first 9 months of this year.  If in 2012 there were 9 such cases and in 2013 – 7, just in the first 9 months of 2014 16 had been seen.   Any precipitous conclusions should be avoided, but Likhachev does note that the increase has been in cases of desecration only, with the number of racially-motivated violent crimes remaining at a low level.

There are primitive neo-Nazis in all European countries, including Ukraine, and this may be the work of such individuals.  If, however, provocation were to be anticipated then this week which is leading to the first anniversary of the EuroMaidan protests would be an obvious time.  The fact that there were members of far-right organizations in EuroMaidan was used first by the regime of Viktor Yanukovych, then by the Kremlin in attempts to slander the protest movement, and later the government which took over after Yanukovych and his people fled.

The attempts were always thwarted by the number of prominent members of the Jewish community and other national minorities in Ukraine who were actively involved in EuroMaidan.

Two of the four violent offences recorded so far in 2014 took place on Jan 11 and 17.  While stressing the need for caution, Likhachev did suggest at the time that the attacks could have been provocation as part of an aggressive propaganda campaign aimed at associating the EuroMaidan protests with far-right and xenophobic radical organizations.

Despite two elections [presidential and parliamentary] this year in which the far-right parties demonized by the Yanukovych regime and the Kremlin have shown abysmal results, there has been no real let-up in the propaganda from Russia.  In an interview for German ARD, Russian President Vladimir Putin claimed that he feared ethnic cleansing and a descent into neo-Nazism in Ukraine.

What better weapon than foul swastikas on the site of a terrible crime against Jews?

The desecration comes just a day or two after a conference of a number of Jewish organizations in Ukraine decided to form a joint Council and issued important statements, one about anti-Semitism in Ukraine.

The signatories “express concern over anti-Semitic incidents which take place from time to time in Ukraine but feel it necessary to indicate their outrage at cynical attempts to make use of the problem of anti-Semitism, to exaggerate its scale and to try to justify through dishonest propaganda flagrant interference in the internal affairs of the country, and occupation and annexation of a part of its territory.  As a result of a large-scale propaganda campaign exploiting this theme, the international community is showing heightened interest in anti-Semitism in Ukraine.

Unfortunately, we cannot exclude the possibility that anti-Ukrainian forces are not only artificially stirring up unhealthy hype over the issue of anti-Semitism, but may also deliberately instigate provocation aimed at demonstrating that the Kremlin’s propagandists are ‘right’.

In the light of the above, we feel it necessary to state that:

-        The democratic government in Ukraine, formed as a result of the victory of the Revolution of Dignity, the early presidential and parliamentary elections, despite the most difficult circumstances of armed aggression, is in constant and construction dialogue and cooperation with the Jewish community, including with respect to investigating incidents of an anti-Semitic nature”.

The Resolution goes on to point out that the above-mentioned results of monitoring provide no justification for the claims made by the Kremlin, Russian media and the propaganda spread on areas “occupied by the aggressor”.

“We call on the international community to be extremely careful in any evaluation of the situation regarding anti-Semitism in Ukraine coming from outside our country. We stress the need for all international, including Jewish, organizations to consult with the Jewish community of Ukraine on all issues concerning current problems.”

The authors also emphasise the importance of close attention to the systematic nationwide monitoring and checks carried out on all manifestations of anti-Semitism and xenophobia.

At this difficult time they call on Ukraine’s Jewish community to show vigilance, calm and unity.   Advice we can all benefit from.