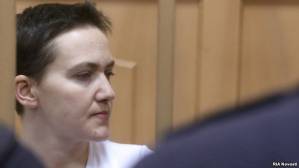 Anne Brasseur, President of the Parliamentary Assembly of the Council of Europe [PACE] has called on Russian State Duma Speaker Sergey Naryshkin to assist in securing Nadiya Savchenko’s urgent release.  Ms Brasseur asks for the former pilot, now Ukrainian MP and PACE delegate to be released in time for the opening of the PACE session on Jan 26 and stresses that the Minsk Protocol which Russia is a party to foresees “the immediate release of all hostages and illegally held persons”.

“I therefore kindly ask you to take measures with your authorities to secure her urgent release under the Minsk Protocol or on humanitarian or other grounds.”

Interestingly, the state-owned agency RIA Novosti has immediately reported this appeal without any distortion or extra commentary.  As reported here, state-controlled media in Russia have largely kept silent about the case, especially since Nadiya Savchenko went on hunger strike on Dec 13.

The appeal from Ms Brasseur comes a day after Nadiya Savchenko’s lawyers again submitted an application for their client to be allowed to attend the PACE session and Vera Savchenko was finally allowed to visit her sister.

Despite the visit having been agreed in advance, the investigators were not prepared to make anything easy. One of the defence lawyers, Ilya Novikov told Radio Svoboda that when Vera Savchenko arrived in the morning at the Investigative Committee to receive the necessary permit, signed the previous day, they refused to give it to her, demanding that she first give testimony herself.  All of this lasted three hours with Vera Savchenko refusing to undergo interrogation and asking for a lawyer.  In total breach of Russian legislation, the Investigative Committee officials refused to allow a lawyer to be present.

Fortunately, somebody must have understood the scandal that this would cause and finally relinquished the necessary permit.

Vera Savchenko in turn told Radio Svoboda that the hunger strike that her sister had now been on for over 38 days had had a severe effect on her sister’s physical state and that it was very distressing to see her in such a state.  She said, however, that her sister was very animated and interested in everything that was happening in Ukraine and with people close to her.  “Everything’s fine with her mood, she’s just very angry and you can feel her permanently boiling over the injustice around.”

Vera’s attempt to persuade her sister to give up her hunger strike also failed. One of the lies attempted by those pro-Kremlin media that even mentioned Savchenko’s hunger strike last weekend was that she had said that she would not eat until the middle of February.

This is untrue, and the reason for the grave concern and unsuccessful calls to stop from Ukrainian clergy, politicians, her defence lawyers and now her sister are that  Nadiya Savchenko has clearly stated and even written in a letter to all those concerned about her situation, that her hunger strike is indefinite.

“I am very aware of your concern and feel ashamed that from prison I myself can do almost nothing.  I have therefore decided to fight in the only way available to me – through hunger strike….

Through my protest – my hunger – I wish to achieve common sense from the Russian authorities and an awakening of conscience from the Russian Investigative Committee. There is irrefutable evidence of my lack of involvement and innocence of the crimes they accuse me of.  What else do they need?

I have taken the decision to go on hunger strike myself and nobody pushed me into it. I have given my word that “Until the day I return to Ukraine, or until the last day of my life in Russia!” and I will not back down, otherwise what value would my words have?!”   (her letter in full, together with brief details about the case, can be read here).

The petition addressed to Ms Brasseur asking that she demand Nadiya Savchenko’s release and that her case be placed on the agenda for the first day of the next PACE session on Jan 26 has now gained well over 5 thousand signatures and can be found (and still endorsed!) here: https://change.org/p/president-pace-anne-brasseur-urge-russia-to-release-nadiya-savchenko

The appeal was passed to the PACE President with the first 3 thousand signatures during her visit on Friday, Jan 16.

There have now been public calls for Nadiya Savchenko’s immediate release from the US State Department, the European Parliament and PACE.

The Russian authorities have only a few days to respond adequately and in compliance with both the Minsk Protocol and international law before the PACE session on Jan 26.

If they prove unable to do so, a major campaign is planned throughout the world in support of Nadiya Savchenko on Jan 26.   Please see some ideas here.

Please also consider writing to individual members of the PACE asking them to raise questions about the case (ideas and emails here).

In awareness of Russia’s draconian rules largely prohibiting peaceful protest, Nadiya Savchenko and her defence lawyers have called on supporters in Russia to hold their actions to #Free Savchenko online.

Please join them and all concerned for Nadiya Savchenko’s health and her swift return to Ukraine now and especially on January 26!