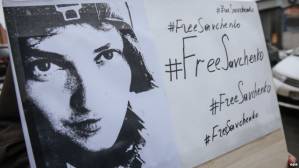 It had seemed like a cynical joke back in October 2014 when Russia’s Investigative Committee first suggested that Nadiya Savchenko could be charged with ‘illegally crossing the border’.  At the end of January with Savchenko in her seventh week of hunger strike and Russia ignoring international calls for her release, the new charge is immensely cynical, and anything but funny.

On Jan 28 the Parliamentary Assembly of the Council of Europe [PACE] the Russian authorities to release Ukrainian PACE member Nadiya Savchenko “within 24 hours and to ensure her return to Ukraine or to hand her over to a third country”.

If, as widely reported in the Ukrainian media, Savchenko’s release was part of behind-the-scenes bargaining, it was unsuccessful.  Russia appears to have promised only to allow a PACE delegation to visit their colleague who has been held in Russian detention since late June 2014.  After announcing Russia’s withdrawal from PACE, Alexei Pushkov, head of the Russian delegation, also said that they were withdrawing their offer to facilitate a meeting between PACE delegates and Nadiya Savchenko.

Then on Thursday morning, it was learned that Savchenko had been transferred to the medical unit of the notorious Matrosskaya Tishina SIZO [detention unit] where anti-corruption lawyer Sergey Magnitsky was killed.

One of her lawyers Nikolai Polozov that Savchenko had been moved to prevent her communicating with her lawyers, and to enable the FSB to pressure her over the second charge against her.

A response so openly cynical is indeed a slap in the face to all those accustomed to basic principles of rule of law.

It is known that Nadiya Savchenko was captured by Kremlin-backed militants in the Luhansk oblast [Ukraine] on June 17 last year and the militants even released a video of her interrogation on June 20.  She then appears in a Russian court on July 3 and is remanded in custody for two months.

Even without Savchenko’s own testimony that she was taken across the border bound and with a bag over her head, it is seriously difficult to believe that between June 20 and July 3 the militants released her and she chose to make her own way – illegally! – to Russia in order to then be arrested and face charges that appear to be based solely on the militants’ claims.

As reported here, the Russian authorities and government-controlled media assiduously avoided any mention of Savchenko’s capture by militants, beginning always with her supposed ‘voluntary’ arrival in Russia.  They have been equally careful to avoid mention of the fact that the defence has presented proof of an irrefutable alibi.  In contrast, the investigators have given only assurances that they have evidence to back the  prosecution.

The new charge under Article 322 of the RF criminal code is absurd as well because it is quite unclear why she is supposed to have illegally crossed the border.

Russia’s Investigative Committee and courts have already shown indifference to the impression their legal nihilism creates on another occasion.  In Oct 2012, Russia organized the abduction of left-wing activist Leonid Razvozzhaev from the centre of Kyiv;  He was taken immediately to Moscow where a court remanded him in custody.

There had been no extradition request and Razvozzaev was in Ukraine legally.  He had also been in the process of applying for asylum meaning that he was under international protection when abducted.  The authorities in Russia claimed that Razvozzhaev had “handed himself in” and “confessed” to organization of mass riots as per an anti-opposition film on the pro-Kremlin NTV channel. Razvozzhaev was able from the courtroom to shout that he had been tortured into ‘confessing’.   He was later also charged with illegally crossing the border.  With all the evidence against this version of events, a Russian court in July this year convicted him (together with Sergey Udaltsov) of organizing mass disturbances and, in Razvozzhaev’s case, of illegally crossing the border.

Nadiya Savchenko’s life is now in danger.  Those in the Kremlin are demonstrating yet again their disregard for human life.  They are also shaming their country but that also appears to be of no concern to them.  Harder-hitting sanctions against those around Putin and the Russian population may also not help Nadiya Savchenko, but the Kremlin has left no other option.