Why is Germany collaborating on detention of Nadiya Savchenko? 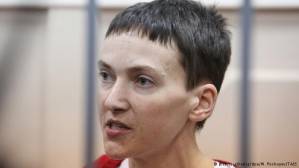 While Ukrainian doctors are refused permission to examine Nadiya Savchenko, Russia’s Penitentiary Service continues quoting anonymous ‘German doctors’ whose anonymity would seem to be part of a secret agreement between Russian President Vladimir Putin and German Foreign Minister Frank-Walter Steinmeier.   Since these ‘German doctors’ are reported to have agreed entirely with the conclusion of the Penitentiary Service and found Nadiya Savchenko’s state of health to be ‘satisfactory’, this secrecy raises some very serious questions about Germany’s role in the ongoing detention of the Ukrainian MP and delegate of the Parliamentary Assembly of the Council of Europe.

Nadiya Savchenko has now been on hunger strike for 69 days.  Her lawyers report that she is asking for an international team of medical specialists, including a cardiologist, to examine her.  It is not surprising that she has no confidence in the conclusions reached by Penitentiary Service doctors and anonymous ‘German doctors’ providing those holding her in detention with ‘confidential’ information about Savchenko’s state of health.

Repeated attempts on Thursday afternoon to gain confirmation or denial from the German Foreign Ministry of the assertions made by Deutsche Welle’s Russian Service were unfortunately unsuccessful.  DW states that the ‘German doctors’ were examined as part of an agreement behind the scenes in Minsk between Steinmeier and Putin.  No details are given since the Russian side demanded ‘total silence’, however the foreign ministry has not confirmed the information issued earlier about Savchenko’s health.

It remains, however, silent about the visit which is the only examination by non-Russian doctors of Nadiya Savchenko whose condition after over two months on hunger strike must arouse grave concern.

This is extraordinary given that Ukrainian doctors from the official Feofaniya Clinical Hospital  were on Feb 18 refused permission to examine Savchenko.

Western governments and PACE officials have all repeatedly expressed ‘grave concern’ over Nadiya Savchenko’s hunger strike and detention.  They have been disappointingly silent in recent days over this first flagrant violation by Russia of the commitments made in the Minsk II agreement.

When this silence includes information of critical importance regarding Savchenko’s health, Germany’s insistence on ‘diplomatic solutions’ looks very hollow and suspect at best.

Defence lawyer Nikolai Polozov reported on Thursday that Savchenko has refused to have any more glucose injections. He told Radio Svoboda that the tubes they have inserted have led to an inflammation of the veins, making it impossible to insert any more. The prison staff propose giving her some kind of ‘protein drink”.  She is refusing to take any food at all, and has stated clearly that she would view any attempt to force-feed her as a form of torture.

An international team of doctors is needed now, as well as clear and unequivocal reaction to Russia’s failure to comply with the Minsk II agreement.