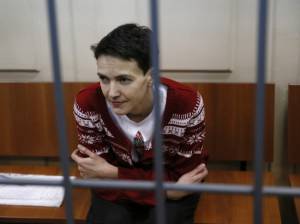 Update:  On March 5 Nadiya Savchenko agreed to take chicken broth.  This makes the situation less immediately life-threatening, but changes little else and the text below written the previous day remains unchanged.

If some still doubt that Russian President Vladimir Putin himself ordered Boris Nemtsov’s murder, nobody seriously questions that it is he alone who will decide whether Nadiya Savchenko is released.  He has thus far ignored the informed advice from the Human Rights Council he created to advise him, not to mention the calls from the Parliamentary Assembly of the Council of Europe [PACE], the EU and all western countries.

On Wednesday a Moscow court rejected another appeal, this time against the investigator’s refusal to allow Savchenko, who is both a Ukrainian MP and a PACE delegate with diplomatic immunity to attend PACE sessions in Strasbourg, the next of which is in April.

After rejection of the appeal against her detention a week ago when the effect on her health of over two months of hunger strike were evident, Wednesday’s ruling was unfortunately not unexpected.  Nor was another development which is of conceivably major importance. The prosecutor asked for the hearing to be held behind closed doors, claiming that he had received threats. His application was rejected on this occasion, and the hearing was open.  The suggestion that court hearings should be closed was first made many months ago, with no mention of any threats as the excuse. It seems likely that more attempts to make these hearings and the trial closed will follow.  There is no case against Nadiya Savchenko, and she was abducted to Russia by the Kremlin-backed militants who captured her before the death of two Russian journalists she is accused of complicity in killing.  How will they justify her detention since early July last year when all the facts are against them?

Nadiya Savchenko has now been on hunger strike for 81 days.  Reports keep citing the ‘German doctors’ who visited her a few weeks ago, although the source of any specific information remains unclear.  As reported here, the doctors did not identify themselves or state publicly what they found.  The Russian Penitentiary Service is, however, making full use of these anonymous German doctors to claim that ‘Russian and international doctors’ have found her condition to be satisfactory.

Others have expressed grave concern for her condition after such a long period without food, and believe that vital organs may be permanently damaged and her life in real danger.

Initial reports that Mark Feygin, one of Savchenko’s lawyers, had secured a promise from her to give up her hunger strike if her condition became critical, were later modified.  Nadiya Savchenko said only that she could think about it.

Novaya Gazeta spoke with another defence lawyer Ilya Novikov who said that the defence had finally been allowed to see the document Russia sent to the European Court of Human Rights.  This basically continues the claim that all is well and that Savchenko’s state is satisfactory.

Savchenko herself says that over the weekend they forced some chemical substance on her which made her vomit bile all Monday. Even the Penitentiary Service doctors have admitted that she has problems with her gall bladder, and there are also issues with her kidneys. “In all else she feels relatively OK.  At least, she is able to sit up straight and stand, ” Novikov says.

Asked about Savchenko being “under the observation of foreign doctors”, Novikov points out that she was seen only once.  On the other hand, he notes that the Penitentiary Service management really are concerned that nothing happens to her while she is under their control, and he is confident that they are following her condition very closely.

Novikov’s words about Savchenko’s mood deserve to be heard in full:

“She is in no way subdued.  She is collected and concentrated. You need to understand what kind of person she is. I don’t know how our investigators were unlucky enough to have ended up with such an accused. She doesn’t break and in fact is not at all like a person who could break”.

Novikov was asked if he could explain the extraordinary stubbornness in not releasing Savchenko.  What do they want to achieve?  Novikov answered that the Investigative Committee will be wishing they’d never become involved in this case, but don’t know how to get out of it.  He suggests that they are hoping that if they just wait another three months, something may happen. And if that something is bad, they hope they can blame it on the Penitentiary Service.

They can’t, but nor can Putin.  Investigators, prosecutors and courts in his Russia have all taken actions they understand are required of them.  Nadiya Savchenko’s life is now in his hands, and this one he cannot wriggle out of.