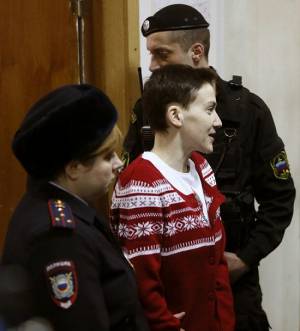 On Nadiya Savchenko’s letter explaining her change in tactics and partial termination of her hunger strike.

The news from the Russian Penitentiary Service caught even Nadiya Savchenko’s lawyers unaware, but this time has proven to be true.  After 82 days of hunger strike, with the last 2 weeks without even glucose and amino acid injections, Nadiya Savchenko has stated that she will “for some period eat broth”.

Her lawyer Mark Feygin visited Savchenko on Thursday and brought out a letter addressed to Ukrainians.

Savchenko begins by recounting one Soviet film - “Emergency”.  In it, Chinese have taken the men from a Soviet tank prisoner and are demanding that they sign a statement that they are betraying their country and going to work for China.

There is a Chinese psychologist who likes to find people’s weak points and use them.  One of the captured men likes to eat a lot, so they don’t give him anything to eat for two weeks then bring him some food but tell him to sign first, eat later.  He says that he’s too weak to even hold the pen, and asks to have something to eat first, then he’ll sign.

He eats his full and says that now he’s stuffed and can go without food for a month.  They can forget his signature.

Yes, physically she feels a bit rotten, but not so much so as to die now, and she will therefore eat broth for a while. If she is to die, then she’ll do so healthy, and if she is to fight, she needs strength.

“I will fight!  Together with you! And at your request, in gratitude for your support and for your sake, I will remain alive.  In order to have the chance to thank you.  We will live”

It was clear that neither respect for rule of war nor fundamental humanity could be expected from Vladimir Putin, and it was only he who could by now decide to release Savchenko.

Among the most moving – and authoritative - calls on Nadiya to give up her hunger strike was surely that from Mustafa Dzhemiliev, veteran Crimean Tatar leader and Ukrainian MP.  He wrote:

““Nadya, daughter, there is no sense in continuing the hunger strike. Russia is not a country with humane principles. Here in Ukraine we will definitely save you, but using other means”.

Once, when his life was in the balance after his longest hunger strike in Soviet labour camp, he received a very similar letter from Andrei Sakharov, asking him to give it up. “Your death will only bring joy to our enemies."

There is every reason for Nadiya Savchenko, recently awarded Hero of Ukraine status, to remain alive, and it is therefore a relief that her life is hopefully no longer in immediate danger.

As tactics go, it is surely important that Nadiya Savchenko stands in a Russian court and demonstrates the monstrous injustice that has been perpetrated against her.  With representatives of all western countries and the international media watching, let Russia explain to the world how she was abducted to Russia by the Kremlin-backed militants who captured her in Ukraine.  How the Russian authorities then took over and held her in Russian detention, and all Russian courts have ever since willingly ignored the fact that she has an unbreakable alibi.

Nadiya Savchenko indeed has a lot of fighting still ahead of her.