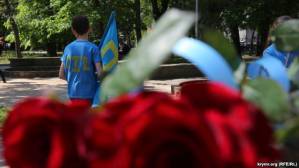 Amid bans, intimidation, the detention and interrogation of Crimean Tatars remembering the victims of the Deportation, there were moments on May 18 of moving solidarity.

Under Russian occupation, some involved real courage. Ukrainian activist, Leonid Kuzmin had earlier received one of the numerous prosecutors’ ‘warnings’ effectively threatening repercussions for any attempt to organize remembrance events.  This did not stop him or other activists from the newly formed Ukrainian Cultural Centre from demonstrating their solidarity with the Crimean Tatars in two ways.  They first produced a video in which they recited the Crimean Tatar anthem, and then lay flowers entwined in barbed wire near the new plaque to bloody Soviet dictator Joseph Stalin who has received two monuments since Russian invaded and annexed Crimea in 2014.   Alyona Popova explained that they were in this way honouring the memory of victims of the Deportation.

“It is 71 years since a tragedy the blame for which lies with one man, whose memorial plaque now ‘embellishes’ Simferopol.  Roses, entwined in barbed wire, are a symbol of that regime.  The roses symbolize mourning, and at the same time the blood of innocent people spilled at the whim of one man”.

The memorial plaque to Stalin who was directly responsible for the Deportation, was erected on May 8, the same time that the head of the Simferopol city administration first announced that the Crimean Tatars would, like last year soon after annexation, be prohibited from holding their traditional remembrance gathering in the centre of Simferopol.

The symbol was poignant and effective with at least some of the activists knowing all too well what kind of repressive measures they can expect from the occupation regime for nothing more ’seditious’.  Four activists, including Kuzmin, were sentenced to periods of community work and warned against supposed ‘extremist behaviour’ for their Ukrainian flags and ribbons in the colours of the flag on March 9, the 201st anniversary of the birthday of Taras Shevchenko.

The occupation regime’s actions, both this year and last, in banning totally peaceful remembrance gatherings were also demonstrations not only of the disrespect but also surely the fear the regime feels before those whose rights it is trampling.

There was little new about the promised ‘new format’ with it involving the formal laying of flowers by high-ranking officials, on the one hand, and warnings and threats in advance, then detentions on May 18.

At least 2 members of the Mejlis, or Crimean Tatar representative assembly, as well as Crimean Tatar and ethnic Ukrainian activists were warned against any remembrance gatherings.

Then on Monday afternoon, the authorities stopped the traditional car procession from Simferopol to Bakhchysaraj.  Around 50 cars with Crimean Tatar flags had just set off from Al Mechet on the outskirts of Simferopol when they were blocked near the Zapadnaya bus station.

One of the participants told the Radio Svoboda Crimean Service that the officers had initially objected only to the drivers using their horns, and they agreed to drive in silence.  However they were stopped again with the police demanding that they remove the flags they were flying.  They agreed but were still stopped.

Two government officials (from among the few Crimean Tatars collaborating with the occupation government) turned up and one of them, Zaur Smirnov tried to justify the obstruction as follows:

“Your rally is not organized. You were seen to have a Ukrainian flag”.

They appeared to have finally reached agreement that the cars could continue on, when suddenly several police vans appeared with OMON riot police inside.  All young people taking part in the event, aside from those underage, were detained and taken to a police station. There they had their fingerprints taken, as though suspected of some crime.

They were only released near 9 p.m. after around 6 hours during which neither lawyers, nor relatives were allowed to see them.

No official explanation was provided.  Those detained say that they were accused of infringing the road rules, as well as of using a Ukrainian flag.  “At our request to show the video, we were told that it’s in Moscow, ask them”, one participant said.

The two journalists from the publication ‘For Human Rights’ who were earlier reported to have been detained, were also released after several hours of questioning, though without any charges laid.

Remembrance in Exile and Solidarity

There were meetings and commemorative events throughout Ukraine and in other countries on May 18.  In Kyiv the gathering was particularly poignant with so many Crimean Tatars living in exile, some actually banned from their homeland.   During the remembrance gathering on Independence Square, a  resolution was adopted and read out by Arsen Zhumadilov, the President’s Ombudsperson on Crimean Tatar Issues.  This called on parliaments of the world to recognize the Deportation of the Crimean Tatar People as genocide.  They called on the Ukrainian government to ensure that Ukraine’s Constitution gives Crimea the status of a national-territorial autonomy within Ukraine.

Refat Chubarov, Head of the Mejlis, and himself banned by Russia, proposed adding two demands to Russia: that it withdraw its forces from Crimea and Donbas and also release all Crimean political prisoners. The resolution, with these additions, was adopted unanimously.

It is truly difficult to fathom the mentality it takes to prohibit people from remembering the victims of a monstrous crime. We can probably only try to imagine the bitter pain of those who once faced deportation, and are now again banned or terrorized and repressed in their homeland.   Resolutions are a traditional part of the remembrance gatherings on May 18, but this year they were tinged with a new urgency.  The symbol adopted this year to mark the Deportation was of a swallow over the peninsula, coloured in red.  If the swallow – who also returns to its nest – represents the faith that once again the Crimean Tatars will be able to return to their homeland, the background is a stark SOS to the world.