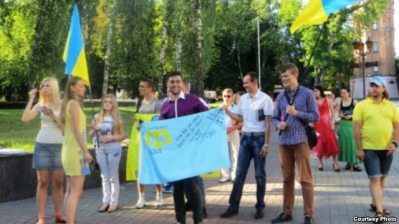 Although the occupation regime in Crimea has again banned events marking Crimean Tatar Flag Day on June 26, the flag is currently being carried around all Ukrainian cities and will be finally brought to Crimea.  The action is just one of the events planned in mainland Ukraine around the festival on June 26.

The flag’s journey around Ukraine (referred to as a flash mob) continues the ‘We are all Crimean Tatars !’ action launched on the anniversary of the Deportation of the Crimean Tatar People, on May 18.

According to Fevzi Abkadirov from the Crimean Tatar Youth Centre, the flag began its journey in Kyiv on June 3.   It has already been in Vinnytsa, Lviv, Lutsky; Chernovtsi;  Dnipropetrovsk and arrived in Kharkiv on June 16.  From there it is to be carried to Cherkasy; Odesa; Mariupol; Kherson; Novoaleksiyivka and finally the Crimean Tatar homeland in Crimea.

The photo above is from the flash mob “We are all Crimean Tatars” marking the arrival of the Crimean Tatar Flag in Vinnytsa on June 10.  The flash mob was organized by the Vinnytsa Student Parliament and supported by the regional administration’s Department for the Family and Youth.

Arsen Zhumadilov from the office of the President’s Ombudsperson on Crimean Tatar affairs explained that this is a nationwide action around the Day of the Crimean Tatar Flag.  “We want to show people living in temporarily occupied Crimea that we are not forgetting them”.

On its journey, people have been writing wishes on the flag.

Since the occupation authorities have prevented Crimean Tatars from holding events in Crimea, the main celebration of Crimean Flag Day will be in Kyiv with a procession, car rally and market planned.  The procession will be from St Sophia Square to Shevchenko Park where the gathering will be addressed by Crimean Tatar leaders Mustafa Dzhemiliev and Refat Chubarov, both of whom have been banned by Russia from their homeland.

Please take the opportunity on Crimean Tatar Flag Day, June 26, to demonstrate that we really are all with Crimean Tatars and all other Ukrainians suffering under Russian occupation.  Circulate the Crimean Tatar flag and inform your local politicians and the media of Crimean Tatars who are right now suffering persecution (the texts below are just some examples).