Prosecutor suspected of involvement in Odesa May 2 tragedyOdesa 2 May Suspect: We were financed by MoscowVital Probe of Odesa May 2 Tragedy stymied because of questions answered?Movement at last on Odesa 2 May investigationRussia Today, or why Odesa May 2 is different from BaltimoreOdesa May 2 Investigation: A Failed Test for Ukrainian JusticeMore Evidence against Incendiary Lies about Odesa 2 MayContinuing Obstruction of Odessa May 2 InvestigationPropaganda that KillsOdessa May 2 trial turns into farce as Russia continues ‘massacre’ propagandaBad Start to Crucial Odessa May 2 TrialsRussia’s New Odessa FileOdesa "Massacre" Propaganda vs. the FactsDangerous silence over police role in Odessa May 2 eventsWithout Double StandardsWhat Russian TV won’t show about the events in OdessaCVU: Pro-Russian activists sold information about pro-Ukrainian activists in OdessaUHHRU condemns police role in Odessa tragedyHuge number feared killed after Russians bomb a school in Luhansk oblast where around 90 civilians had sought shelterEven in Russia, Putin’s ‘denazification’ claims prove no excuse for war against Ukraine
• Topics / Law enforcement agencies 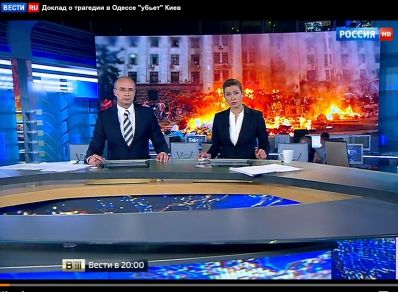 The Ukrainian authorities’ failure to properly investigate the events of May 2, 2014 has now been compounded by failure to react adequately to a devastating report from an international team set up by the Council of Europe.  All of this is enabling Russia’s propaganda machine to continue spreading toxic lies about a ‘massacre’ that never took place.

A month has passed since the International Advisory Panel’s Nov 4 report blasted grave inadequacies in the investigation into the disturbances and fire on May 2, 2014 in which 48 people lost their lives.  The only response from Ukraine’s Interior Ministry came as soon as the report was published.  Since the comments did not reflect what the report had actually said, it is possible that those in the ministry had not read it – or hoped that others hadn’t.

The report also totally demolished any claims of a ‘massacre’ and attempts to treat  the anti-Maidan (or pro-federalism) activists as victims of ‘Ukrainian radicals’. This narrative was pushed by Russia from the outset and assiduously promoted by pro-Kremlin media and various enterprises, such as a suspiciously well-funded exhibition which has been travelling around Europe.

The reaction to the report here too was minimal.  Russian media reported only the criticism of the Ukrainian authorities, with some simply adding it to their propaganda repertoire.  The news feature on state-owned TV channel Vesti.ru, for example,  was entitled: “The Council of Europe has accused the police of involvement in the massacre in Odesa”.  The presenters go on to claim that “The Ukrainian police were implicated in the mass killing of people in Odesa on May 2 last year, it is stated in the Council of Europe….  In response to the accusation, Kyiv has preferred to remain silent. And in principle there’s nothing to answer – neo-fascists to this day feel in control in Odesa”.

On the anniversary of Kristallnacht, November 9, the Kremlin-backed militants in Donbas known for their contemptuous dismissal of Ukraine’s leaders as “pathetic Jews”, and other anti-Semitic gems, took time out from warning of “mounting fascism” and how Ukraine’s government had been seized by “Nazis” to remember the ‘victims of fascism’ on May 2, 2014.

The Nov 4 report made it quite clear that the disturbances in the centre had been caused by a group of anti-Maidan activists who attacked a pro-unity (pro-Ukrainian) march in the centre of the city.  It found that the fire which caused the death of 42 of the victims had started in 5 places, with 4 of these directly due to the actions of people within the Trade Union Building.  It says that there is no evidence that the fire was pre-planned, and it in no way questions earlier findings presented by the 2 May Group, a non-partisan civic initiative (see: More evidence against incendiary lies about Odesa 2 May).  The Nov 4 report points out that the pro-federalist activists “broke down the door and brought inside various materials, including boxes containing Molotov cocktails and the products needed to make them.”  Molotov cocktails were being pelted by both sides, and which caught fire is quite simply impossible to determine.

It is frustrating that Ukraine’s leaders are helping those who have systematically lied about the Odesa events, using these lies to recruit fighters for their hybrid war against Ukraine.  This is not, however, the only reason for criticising the failure to carry out a proper investigation, nor the only lesson to be learned.

Answers are owed to the victims and their family.  They are also needed to re-establish trust in the authorities, which has been seriously compromised.

It is hardly surprising that the Prosecutor General’s Office and Interior Ministry should prefer to remain silent about a highly unflattering report which concluded that a year and a half after the events, there had been no substantial progress in identifying the reasons and apportioning blame.  The Nov 4 report pointed out that, given evidence suggesting police complicity, as well as omissions, and the failure of the emergency services to respond in time to the fire, the investigation should have been carried out by a body independent of the Interior Ministry.  It stated, for example, that “the investigation into the conduct of the fire service cannot be regarded as independent, given the structural links between the emergency services and the Interior Ministry. These concerns again highlight the need for an independent and effective mechanism for the investigation of serious human rights violations committed by law enforcement officers and other public officials”.

The 2 May Group, a civic initiative which has taken on many of the functions which the authorities have shirked, has called on the Prosecutor General to draw conclusions from this report and to pass the entire investigation over to the Department for Special Investigations within the Prosecutor General’s Office.  It was with the creation of this body late in 2014 that progress began to be made, albeit slowly, on investigating Maidan crimes.

In their Nov 19 appeal, the 2 May Group points out that the Department is independent of the Interior Ministry and has unique experience in investigating high-profile cases involving top-ranking officials and violent crimes with a large number of victims and suspects. It is also the obvious choice since it is already working on an investigation with the conclusions and recommendations made by the International Advisory Panel needing to be taken into account.

There has thus far been no response, but the consequences of ignoring the report and the need for an independent investigation are enormous.

It is possible that this conclusion had in fact been drawn since a number of the people who had been held in detention on charges related to the disturbances were released and at least granted bail.  Doubts have been expressed from the beginning about a number of the prosecutions, with the charges against 21 anti-Maidan activists applying just as well to thousands of other people who took part in the disturbances.

A further disturbing consequence of the authorities’ failings has been the increasing role played by Right Sector and some other Maidan supporters in actively obstructing court proceedings.  On Nov 30, activists blocked part of the Odesa Regional Court of Appeal until they got agreement to consider an appeal against the decision to grant bail.  This is despite the fact that Ukrainian legislation does not allow for appeals against such rulings.  The same crowd blocked the SIZO or remand prison where the men in question were held to prevent them being released, and forced the panel of judges who have been hearing the case to resign.  Activists have previously obstructed court hearings into the charges against Maidan activist Serhiy Khodiyak who is suspected of firing at least one fatal shot that day.

Many people believe that the events on May 2, 2014 prevented Odesa from being dragged into the same hell as Donbas, and that at least one group of the anti-Maidan activists were actively seeking such escalation.  That does not legitimize lawless behaviour by those who opposed them, either on May 2 or now.

While one side provoked the disturbances on May 2, people on both sides used weapons and violence.  Given the overwhelming preponderance of anti-Maidan activists among those killed, it is disturbing that all those held in detention have been from the anti-Maidan camp, while Khodiyak, who as mentioned is facing serious charges, remains at liberty.  All such concerns, as well as doubts about the termination in the proceedings against two people and the failure to bring other criminal proceedings against officials, are echoed in the International Advisory Panel’s report.

Vladimir Sarkisyan, one of the members of the 2 May Group, has just written a stark assessment of the current situation, in which he suggests that Ukraine’s authorities have no interest in investigating the Odesa events.

Throughout May 2, he writes, the police, SBU [Security Service] and the emergency services “demonstrated reluctance to intervene in the situation, and some of their actions can be deemed as having deliberately exacerbated the consequences.”

If the influence of the Russian Security Service can be attributed a role in the direct events on May 2, he says, the “conspiracy of silence around the investigation clearly demonstrates that the authorities have an interest in stymieing the case”.

If Ukraine’s leaders are hoping that the matter will simply get forgotten, then they should think again, Sarkisyan writes.  “The Odesa tragedy continues to arouse intense interest within Ukraine and abroad.  It is not only an instrument of pressure on Ukraine, but also a kind of indicator of the irreversibility of the state’s renewal and its readiness for integration in the democratic world”.

The stakes are much too high and Ukraine’s leaders will be held accountable if they do not recognize this challenge.