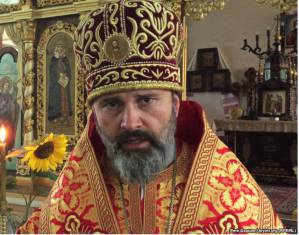 Archbishop Kliment of Crimea and Simferopol has made an impassioned response to Bulgarian Patriarch Neofit’s demand that Ukrainian President Petro Poroshenko “defend Ukraine’s Orthodox believers from persecution”.   Why was the Patriarch silent, he asks, when Orthodox churches of the Kyiv Patriarchate were seized in Crimea in 2014, “when they abducted and tortured my parishioners Andrei Shchekun, Anatoly Kovalsky, Oleg Sentsov, Oleksandr Kolchenko and Oleksandr Kostenko?”

The answer is unfortunately clear if one reads the Patriarch’s appeal, or at least the version that was eagerly circulated by the Russian media.

According to Interfax.ru, the Patriarch of Bulgaria writes in his letter to Poroshenko that his “serious concern is aroused by the numerous recorded facts of violations of the rights of believers of the single canonical Orthodox Church in Ukraine. In the first instance we are talking about the forcible seizures of church buildings of the Ukrainian Orthodox Church”.

Patriarch Neofit  asserts that such a move would not only “destabilize the social situation in Ukraine” (he does not explain how), but also make it impossible for the clergy and believers from other countries to visit both Lavra, since they have “no Eucharistic and worshiping contact with religious structures in schism.”

That relation has been shifting over recent times with the Moscow Patriarchate viewed by many as having at very least failed as a Church to condemn Russia’s aggression.  A study carried out this year entitled ‘When God becomes the weapon’ found that although the Russian Orthodox Church [the Moscow Patriarchate], like the Kremlin, denies any role in stirring up the conflict in Ukraine, there is, however, increasing “evidence of close ties between the Moscow Patriarchate and the pro-Russian cause”.  The researchers provided examples of activities of OUC MP priests who had, to varying degrees, supported pro-Russian illegal paramilitary groups in their persecution of Protestant, Evangelical and Catholic Churches, as well as Orthodox believers not under the Moscow Patriarchate (see: ‘Russian World’ and Religious Persecution in Donbas)

What is certainly undeniable is that Christians have been seriously discriminated against, persecuted, and some murdered by Kremlin-backed militants, and the current leaders have made their tolerance for only the Russian Orthodox Church more than clear.

The same has been seen in Crimea where all faiths have faced persecution since Russia’s invasion and annexation, except for churches linked to the Moscow Patriarchate.

As reported here, Archbishop Kliment has recently warned that churches under the Kyiv Patriarchate are at risk of being forced to close with the requirement to re-register under Russian law being used to drive out the religious faiths viewed as ‘undesirable’.

Archbishop Kliment expresses his surprise at Patriarch Neofit’s letter which he hopes is due to his lack of knowledge about the real situation in Ukraine.

“As a person with Bulgarian roots, I consider it possible to asked why you were silent when Orthodox churches of the Crimean eparchy of the Ukrainian Orthodox Church under the Kyiv Patriarchate were seized in Crimea in 2014, when they abducted and tortured my parishioners Andrei Shchekun, Anatoly Kovalsky, Oleg Sentsov, Oleksandr Kolchenko and Oleksandr Kostenko?  When I asked and asked the international community, the hierarchs of Orthodox Churches of the world to defend believers of the Crimean eparchy of the UOC KP.  Where was your Christian love then, where were justice and sympathy?”

He reminds the Patriarch of the history of his own Bulgarian Orthodox Church which was for 75 years considered ‘schismatic”.

“Aggression against the Ukrainian state has resulted in Orthodox believers in Ukraine no longer wanting to endure power over them of a Church which supports this aggression and occupation.  Ukrainians are therefore in any larger numbers finding the will in themselves to leave subordination to the Moscow Patriarchate and become believers of the Ukrainian Orthodox Church under the Kyiv Patriarchate.”  This, he stresses, is their right as enshrined in the Constitution and Law on Freedom of Conscience and Religious Associations.

Archbishop Kliment informs the Patriarch that believers attached to the Kyiv Patriarchate in Crimea (who, according to the Razumkov Centre, make up 11%* of the population), that is, around 200 thousand believers are experiencing constant persecution. The Cathedral of Vladimir and Olga in Simferopol is under threat of destruction, and a part of its buildings have already been auctioned off illegally.

“I therefore ask you to turn to the President of Russia Vladimir Putin and the Moscow Patriarch Kirill to defend believers of the Crimean eparchy of the UOC KP from persecution and to help them to retain their own church property.

I would also ask you to speak out in defence of my parishioners Oleg Sentsov, Oleksandr Kolchenko, Gennady Afanasyev, Oleksiy Chirniy; Oleksandr Kostenko, innocent men convicted under Russian laws only because they are Ukrainians. I am willing to provide you with the necessary explanation on all facts and events and look forward to your reply.  With love of Christ, Kliment”.

Judging by open sources, Patriarch Neofit’s links with the Russian Orthodox Church are strong, and it is certainly possible that the latter served as his source of information about events in Ukraine.  The Moscow Patriarchate has also been silent about violations of believers’ rights in Crimea, as in areas under Kremlin-backed militant control in Donbas.  It remains to be seen whether the recent dismissal of Vsevolod Chaplin from his post as chairman of the Synodal Department for the Cooperation of Church and Society will make any difference.  Chaplin has been vocal in demonstrating total support for Russia’s actions in Ukraine, but since he has also recently criticized Patriarch Kirill, the reason could be more banal.

The Church’s voice is certainly needed in defence of believers in Crimea whose rights are being violated, and in defence of the many Crimeans now imprisoned in Crimea or Russia, effectively for their opposition to Russian occupation.