Ukrainian anarchist accused of trying to overthrow the State with leaflets 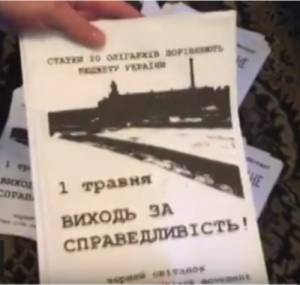 "The fortunes of 10 oligarchs equals Ukraine’s budget.  On 1 May come out in support of justice!"

If Ukraine’s SBU [Security Service] had publicly warned that a tiny group of anarchists could be seeking to “destabilize the situation in the country”, they would have elicited a smile or two.  Instead they initiated criminal proceedings, and on extremely serious charges.

The SBU announced on April 28 that it had “uncovered a group of people in Lviv who were planning a First of May march provocation”, with this “aimed at destabilizing the situation in the country”.   Since 19-year-old anarchist Oleh Kordiyak could, if charged and convicted, face a 3-year sentence, the SBU’s highly disturbing report is worth reading in full.

“During searches of the offenders’ [sic] homes, computer technology and campaigning material aimed at organizing and holding a marsh with calls directed against the state were removed.  Criminal proceedings have been initiated under Article 109 of the Criminal Code (actions aimed at the violent change or overthrow of the constitutional order or at seizing control of the country).

The SBU regional centre, together with the prosecutor’s office, have also uncovered a group which in social networks called itself the ‘Lviv Anti-Fascist Resistance’ and which was planning provocation for 9 May [Victory Day].

The offenders were preparing and circulating material which popularize the totalitarian regime with the use of communist symbols. During the searches of the provocateurs’ homes, computer technology was removed, as well as material with proof of anti-Ukrainian activities.

Criminal proceedings were initiated under Article 258-3 § 2 of the Criminal Code (taking part in a terrorist organization).”

Had the report ended on that note, there might have seemed some chance that the SBU really had diverted dangerous, albeit unclosed, ‘provocations’ on the days in question.  There is, however, also a video, which begins with the leaflets for the May 1 event being removed from a backpack.  The headings read: “Come out for justice on May 1”, “The workers will rise up for freedom” and “Down with ministers! Down with capitalists!”  It would be seriously stretching credibility to call even the last of these a call to overthrow the regime, and there is no suggestion of violent means anywhere. The video also shows an image of a red flag with a caption about the Pioneer movement named after Vladimir Lenin, and red brochures with a hammer and sickle, or with Lenin and USSR on them.

Three young men are questioned on the video, with nothing in any way equating to the serious charges under which the proceedings have been initiated.

Oleh Kordiyak from the anarchist Black Dawn organization says that 5 SBU officers turned up at his home on April 27 and carried out a search.  He adds that he himself showed them the leaflets which he sees nothing unlawful in.  He told Hromadske TV that he had been taken away for questioning, but at present has witness status.  He believes that the SBU are deliberately seeking to associate his anarchist movement with some Stalinists that nobody has even heard of.  He suspects, in fact, that the supposed ‘Anti-Fascist Resistance’ organization is fictitious.  Certainly, nobody seems to have heard of them, and there is nothing in the report to indicate any activity worse than displaying communist symbols.  This, under a highly controversial law passed in 2015, is now illegal in Ukraine, however there is no mention of the ‘decommunization laws’ in the SBU statement.

According to Kordiyak’s lawyer Maria Kaminska, the information on the SBU site is different from that on the search warrant.  Both documents mention Article 109 on seeking violent overthrow of the regime, however the other article mentioned on the search warrant is obstructing the activities of the Armed Forces of Ukraine or other military formations.  What this is about is anybody’s guess.

There have often been attempts, sometimes successful, to provoke trouble in Lviv during the first week of May, and there were grounds for SBU vigilance.  There are none for heavy-handed measures against youthful anarchists whose actions could at most muster an administrative charge if it could be proven that they had pasted a leaflet in a place where this was prohibited.

Over the last year and more, Ukraine’s Security Service has initiated several prosecutions which arouse concern.  These include, but are not confined to, the detention and trial on treason charges of blogger Ruslan Kotsaba and the ongoing detention, without any reasonable grounds, of three Russian nationals Anastasia Leonova, Olga Sheveleva and Pavel Pyatakov.  Those cases, and now terms like ‘anti-State’ and ‘anti-Ukrainian’ to justify criminal proceedings over an anarchist May 1 rally are chillingly reminiscent of a Soviet past which Russia is currently reinstating and that Ukraine has supposedly rejected.