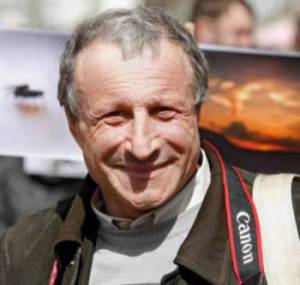 Disturbing details have emerged of the KGB-level surveillance used against Mykola Semena, the Crimean journalist charged with ‘public calls to violate Russia’s territorial integrity’ over a text supporting the Civic Blockade of Crimea.  Semena has also been added to the Federal ‘List of Terrorists and Extremists’.  He is currently No. 4603 on the list which includes Ukrainian filmmaker Oleg Sentsov, Russian poet Alexander Byvshev for his poems in support of Ukraine, and many others.

The contempt demonstrated for the presumption of innocence in adding to him to the list without any court ruling was seen in the case of Sentsov and other 3 opponents of Russia’s occupation of Crimea, and is no surprise.  Since Semena has been formally charged and prohibited from leaving Crimea, but is not in detention, the move has serious practical consequences.  His bank accounts have been frozen, and although the bank manager allowed him to make a one-off withdrawal, the situation is serious.

The FSB carried out searches of the homes of Semena and six other journalists on April 19.  They removed computer technology from Semena’s home and, according to the de facto prosecutor, “documents indicating preparation of an article of an extremist nature”.  Semena was taken away for questioning and was subsequently charged with making ‘public calls via the media / Internet to violate Russian territorial integrity’ under Article 280.1 § 2 of the Criminal Code.  This charge came into force in May 2014, and is now, as feared, being used, to silence protest over Russia’s invasion and annexation of Crimea.

In a law-based country, you would preface any statement about sentences with the words ‘if convicted’.  Unfortunately, there is no evidence at all of acquittals on these charges, or any other supposed ‘extremism’ offences.  The question is probably only whether Semena faces a real term of imprisonment, with the charges carrying a potential sentence of up to 5 years’ imprisonment.   There has been no response to the Ukrainian Journalist Association’s appeal for Semena to be allowed to leave Crimea.

It is worth noting what this possible sentence would be for.  De facto prosecutor Natalya Poklonskaya told TASS that criminal proceedings had been initiated over one particular article about the Crimean Blockade.  Poklonskaya claimed that the text “justifies the actions of extremists and terrorists”.

Semena was alleged to have “made statements calling for isolationist measures, including military operations, to be carried out in relation to the peninsula and its residents”

The Crimean Blockade was initiated by Crimean Tatar leaders in exile with very specific human rights demands.  Though there were problems with how it was carried out, it was a peaceful action.  It certainly highlighted the degree to which Crimea is organically linked with and dependent on mainland Ukraine for food, water and power, and led to an intensification in repressive measures, particularly against Crimean Tatars.

It may now lead to a first imprisonment, with the charges quite surreal in the way they turn everything upside down, claiming that those who want occupied territory to be liberated are themselves encroaching on Russia’s ‘territorial integrity’.

The second phase should be the total liberation of Crimea.  There is no call to anything in the text except total support for a full blockade.

In a recent interview, Semena told Anton Naumlyuk that he had noticed intense surveillance for some time.  Wherever he went, there was always somebody following, listening. Two sound recorders from the Radio Svoboda Crimean Service ‘Krym Realii’, which published the article in question, and others, later admitted that they had been recruited.  They had been summoned, offered money and work, they said.

If such ‘recruitment’ hearkens back to Soviet times, the details about the surveillance are even more chillingly reminiscent of the KGB.

Semena sent the article to the Chief Editor of Krym.Realii on September 11.  He immediately deleted all record of the article and of his having sent it.

A criminal investigation was launched on April 13, with the decision stating the exact time that the article had been sent, meaning that somebody was following his actions even on the computer.  He says that he did have the feeling of being watched, and the number of screenshots indicate that they were recording every step of the process of writing the article.

Semena’s trial is likely to take place in the autumn.  His lawyers hope that he will receive a suspended sentence. Despite the cynical absurdity of the charges, nobody is expecting an acquittal.