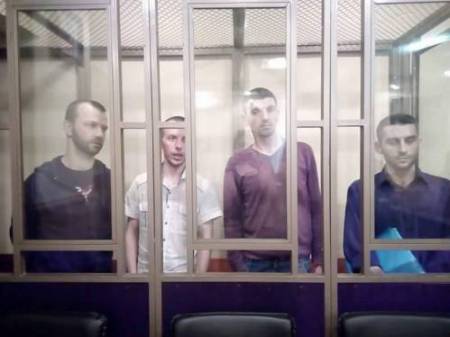 The renowned Memorial Human Rights Centre has called on Russia to release four Crimean Muslims from Sevastopol and reminded it of restrictions under international law since Crimea is occupied territory. This is of critical importance since Russia has (unwarrantedly) charged the four men now on trial and 10 other Crimeans with involvement in an organization which is totally legal in Ukraine.

Ruslan Zeitullayev, Nuri Primov; Rustem Vaitov were arrested in January 2015 and Ferat Saifullayev in early April that year.  All have been held in custody since then and are now on trial in Rostov (Russia).  30-year-old Zeitullayev is charged with ‘organizing’ a terrorist organization (Article 205.1 § 1 of the Russian criminal code) and is facing a life sentence, while Nuri Primov, Rustem Vaitov and Ferat Saifullayev are accused of taking part in it (Article 205.1 § 2), with this carrying at least 10 years.  The charges are based solely on alleged involvement in the Hizb ut-Tahrir organization which is legal in Ukraine and almost all countries.  Russia’s Supreme Court declared it ‘terrorist’ in a 2003 judgement which was long kept secret, preventing the organization itself and rights NGOs from appealing against it.

Russia has never provided any evidence to back the Supreme Court decision, and this, Memorial points out, is one of the reason why it has repeatedly condemned the judgement and considers all those convicted of such charges political prisoners.  It notes that there is no evidence in any country, including the Middle East, of any terrorist activities, and the defendants in this case (and all others) are charged with nothing more than supposed affiliation to the movement and reading Islamist literature.  Hizb ut-Tahrir is legal in Ukraine and in all western countries (except Germany where there was an administrative ban on forming a German branch, not a criminal ban).

There have already been many such ‘trials’ in the Russian Federation with convictions effectively guaranteed.  They are essentially a conveyer belt of repression since by calling the organization itself terrorist, you don’t need to demonstrate that an individual suspect actually committed or planned to commit any crime.  You don’t need to prove that the organization is ‘terrorist’ since the Supreme Court once said it was.

This is the first time that Memorial HRC has issued a statement regarding Crimean Muslims on trial and it has not pulled any punches.

The trial of the four men is continuing in Rostov with multiple infringements of procedure.  One of the worst aspects of these cases is the fact that Russia allows the use of ‘secret witnesses’.  The judge in Rostov has demonstrated total indifference to the rules on interrogating such ‘witnesses’, including the fact that the man was obviously consulting with somebody before answering any question.  Even then, his testimony was muddled and unconvincing (see: Russia Uses Suspect ‘Secret Witness’ for Concocted Crimean ‘Terrorism’ Trial).

It is very likely that one of the other 10 men now facing similar charges – Emir-Huseyn Kuku – is in prison because of his human rights activities.  There are also compelling grounds for thinking that he may have been arrested after an earlier attempt to abduct him failed (see: When Abduction Turns to FSB ’Search’ in Russian-occupied Crimea)  It is quite possible that Vadim Siruk was arrested in February 2016 so that Russia could deny targeting only Crimean Tatars.  Both Siruk and his wife are ethnic Ukrainian converts to Islam.

All 14 Crimean Muslims are political prisoners and victims of Russia’s occupation of Crimea.  It is vital that pressure is brought to bear by the international community to force Russia to abandon these manifest miscarriages of justice.