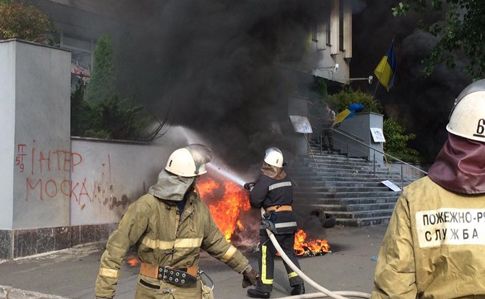 Irresponsible protesters who attacked the offices of TV Inter on Sunday afternoon have done Ukraine no favours.  Their actions were not just dangerous and unacceptable, but stupidly counter-productive and make the Interior Minister’s reference to his serious allegations against the channel seem ill-timed.

At least one person sustained an injury, while two people were treated for smoke inhalation, probably after incendiary devices were hurled into the offices of TV Inter in Kyiv.

A group of around 20 protesters turned up outside the National Information Systems (Inter Media Group) building at about 4 p.m., set up tents and began burning tyres.  According to the Interior Minister Arsen Avakov, all of them were in camouflage gear but did not try to conceal their identity.  Most, he says, were former military servicemen from the 30th brigade. They held placards protesting against what Avakov described as the pro-Russian stance of the channel.  A scuffle broke out between protesters and Inter security guards. In Avakov’s interview to TV 1+1, he mentions only one fire within the building.

Later, however, the emergency services issued a more disturbing picture of events. They reported that an incendiary device had first led to a fire on the first floor which was extinguished at 16.51.  Another such inflammatory substance caused a fire on the second floor at around 5 p.m. while the evacuation was underway.

The report stresses that a definitive statement on how the fire arose must come from the investigators, but does repeat that the preliminary conclusion is that an incendiary device was used.

Avakov spoke of 6 protesters being detained, the Prosecutor General Yury Lutsenko – of 9, however Ukrainska Pravda reported later in the evening that only 2- 3 people were still in custody.

The criminal investigation at present is under two articles of the Criminal Code: ‘hooliganism’ and ‘deliberate destruction of or damage to property’. Neither Avakov’s interview, nor the police statement clearly speak of an incendiary device being used.  If the emergency services’ preliminary findings prove correct, and those outside are proven to have been responsible for the devices, then the charges should surely be more serious.  There were a number of people in the building at the time, with this just hours before the Sunday news analysis program was due to go on air.

Some commentators, like MP Iryna Herashchenko, have called the attack 'provocation'.  It is certainly difficult to understand how it could achieve anything other than damage Ukraine's reputation, but this would not be the first protest that took place despite being obviously senseless.

The Inter management have reacted very angrily to the attack and demanded that President Petro Poroshenko ensure a proper investigation.  The Inter statement clashes with other reports in asserting that this was an armed attack by around 15 people who burst into the building, fired shots and set fire to the building.  It also speaks of several employees needing treatment for smoke inhalation and one having a broken leg.

Artem Shevchenko from the Interior Ministry stated later that National Information Systems were refusing to provide the crucial CCTV video footage which will make it possible to ascertain what really happened.

Inter journalists also came out with a statement in which they asserted that this was an attack on freedom of speech and “an attempt to shut up inconvenient journalists”.

TV Inter was anything but a bastion of freedom of speech and media independence under the regime of Viktor Yanukovych, and gained particular notoriety for its pro-regime propaganda and distortions during Euromaidan.

The situation has not improved markedly and there are repeated complaints and protests over the channel’s perceived pro-Russian stance, its broadcasting of Russian celebrities who have openly supported Russia’s aggression against Ukraine, and some of its journalists..

The attack comes just days after the Interior Minister made some extremely strong accusations on his Facebook page.  On Aug 31 he wrote of the “anti-Ukrainian anti-state position of the Inter TV channel”, and asked what the National Broadcasting Council was doing in tolerating this.  He said he was turning to the SBU [security service] whose direct responsibility it was to react to “the published facts”, saying later that terabytes of such material could not be falsified.

He returned to this during the above-mentioned 1+1 interview.  Avakov does state that it is the police’s role to stop excesses, but then adds that “it is the role of politicians and the government to prevent such conflicts”, and recalls his public allegations against Inter to which the SBU has not reacted.

He asserts that the police have a huge volume of documents provided by “activists and MPs which pertain to the actions of staff of the channel and show that they agree their editorial policy with Russian political spin doctors and the leaders of the so-called ‘Donetsk people’s republic’.   He ends by saying that on Monday or Tuesday, police investigators will be deciding whether there are elements of a crime in this and how to react.

Avakov’s adviser Zoryan Shkiryak two days later referred to the channel as “an information enclave of Russian separatism” and repeated Avakov’s suggestion that its director, Igor Shuvalov, a Russian national, should be deported.

Avakov does not specify what the documents are, though his mention of activists and MPs suggest that at least some of them have been provided by Myrotvorets.  This volunteer initiative believed to be closely linked with Avakov’s advisor and MP Anton Herashchenko has aroused concerns both within Ukraine and abroad over its exposure of personal data about journalists and often strange choice of targets.

Part of the material is certainly correspondence allegedly between Tetyana Yegorova, from the so-called ministry of state security of the self-proclaimed ‘Donetsk people’s republic’ and a Russian journalist who was trying to get a job with Inter.  The correspondence mentions Maria Stolyarova, who was at the time creative producer for Inter.  If authentic, then the correspondence is disturbing.

Many of Inter’s actions, as well as some of its journalists, have been met with concern, and if Avakov has the proof he mentions, then it should, certainly, be taken into consideration.  Unfortunately, his mention of this immediately after reporting on the arson attempt could not fail to influence the viewer's reaction to the protesters' actions.  Judging by some of the politicians who were seeking the release of the men detained, there will be many treating the arson attacks as just another act of civic protest.

Actions that could conceivably have ended in loss of life cannot be justified in this way, and no material incriminating the channel or its staff should be used as an excuse for leniency.