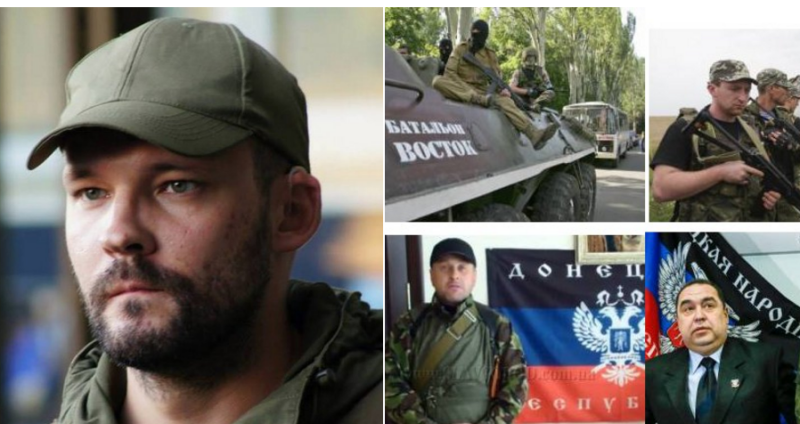 Russia’s Investigative Committee has announced  criminal proceedings against a Russian national alleged to have fought on Ukraine’s side in the military conflict in Donbas. There have been no criminal cases brought against those paid to fight on the side of the Kremlin-backed militants.  Since it is even known how much Russian soldiers have been offered for agreeing to fight in Donbas, the reason for such selective prosecution seems obvious.

The Investigative Committee reports that the charges against Dmitry Fedotov are under Article 359 § 3 of the Russian criminal code (mercenary involvement in armed conflict). It is claimed that Fedotov left his wife and two small children in the Leningrad oblast in April 2014 and went to Kyiv “to take part in anti-government protests”.

While in Ukraine, Fedotov is alleged, as part of the volunteer battalion ‘Aidar’ to “have undergone special sabotage training, including under the leadership of instructors from the USA. Then in 2015, for material enrichment as part of the above-mentioned nationalist battalion, he took part in military action against representatives of the self-proclaimed Donetsk people’s republic.”

The good news for Fedotov is that the Investigative Committee does not know where he is.  The bad news for others is that searches are apparently underway of Fedotov’s places of residence and those of his “contacts” in various parts of Russia.

The ‘news’ received enthusiastic coverage from pro-Kremlin media, who particularly delighted in calling him “a butcher” (he appears to have worked for some time in a meat processing factory).  Life.ru claims to have spoken with people who know Fedotov and say he has far-right views, and that he wanted to get Ukrainian citizenship, but was turned down.  There is no confirmation or even any trace of Fedotov in the Ukrainian media and social networks, which only accentuates the odd elements in the story.  It is quite unclear what could be meant by ‘anti-government protests’ in Kyiv in April 2014, and when Fedotov is supposed to have been a ‘mercenary’.  The Aidar Battalion was formed in May 2014 by volunteers, and was disbanded in early 2015, with an equivalent formed as part of the Ukrainian armed services.  Training by “US instructors” would doubtless have been welcome, but there is nothing to suggest it was provided.

The point of the report is hard to fathom, given that Fedotov is not in custody.  The pro-Kremlin media who embellish such reports would certainly never come up with hard-hitting questions or reports on the number of Russians fighting on the side of the so-called ‘Donetsk and Luhansk people’s republics’ for money.  It is not, however, easy to hide this, given the scale and the fact that not all return alive.

It was too difficult to conceal the number of Russians fighting in Donbas, and indeed, until shortly after Russian or pro-Russian fighters downed Malaysian airliner MH17, using a Russian Buk missile, Russians were at the head of the so-called ‘Donetsk people’s republic’. Moscow has therefore concentrated on pushing the line that the fighters have ‘volunteered’, impelled solely by their concern for the people of Donbas and wish to ‘defend’ them.  There have been elaborate, sometimes grotesque attempts to conceal soldiers’ deaths in Donbas, or how they came to be there.

There are, however, numerous fighters who have quite openly admitted that they received payment for their ‘services’.  These include Alexei Milchakov, the notorious neo-Nazi sadist from St Petersburg whom, together with Jan Petrovsky and others from the Rusich armed unit, Ukraine would certainly want to try for war crimes.

In Feb 2015, Rosbalt.ru spoke with a fighter from St. Petersburg who agreed to the interview on condition of anonymity.  Asked how much ordinary fighters receive, he said that while they’re training, 80 thousand roubles a month.  Once in Donbas, they got 120 thousand at that time per month, or 60 thousand a week if they took part in battles. For that reason, he said, they like to shoot even if there’s no particular need.

The money “comes from sponsors” and more, he can’t say, except that they pay regularly.

While he doesn’t give numbers, he says that there were a lot of so-called ‘volunteers’ from Stavropol, from the Urals, from the North, and from central oblasts. There were also “ethnic divisions”, for example, a Chechen battalion, a lot of Ossetians, and he says that the people he was with even came upon a Serbian unit.

Relatives get a million roubles if the fighter is killed.  The body will be returned if there are relatives, otherwise they’ll be ‘buried’ where they died.

Russian journalist Sergei Parkhomenko recently reported that people near the border with Donbas also know when men are either being sent to Ukraine or returning, because of the queues either at the hypermarket (stocking up on the way) or at the bank machines to get their pay out in cash.

While there may be some scope for doubt as to who is financing fighters ‘off the street’, sent to Donbas, there are also contract soldiers, and here illusions are unwarranted.  In October 2015, 4 contract soldiers were sentenced to terms of imprisonment effectively for refusing to fight in Ukraine.  They had gone absent without leave after being taken to Rostov, held in appalling conditions, and put under heavy pressure ‘to volunteer’ to go to Donbas.  They were offered up to 8 thousand roubles a day (around 110 EUR, a significant amount for most young Russian soldiers).

Russia’s State Duma appears about to pass a law which will mean that conscripts can be sent abroad.  How much that will change the situation with respect to Ukraine is unclear.  Russia is unlikely to come clean about its military involvement, and there have been worrying reports for over two years now of young conscripts being sent without their consent.

A young man told Parkhomenko that he wanted to go to Syria, not Ukraine.  For some it may well be the larger amounts of money offered, but the young soldier said that Syria was better because at least you got something in writing.  Russia is pretending to not be in Ukraine, and men are sent without any documents at all.

No documents, but money is unquestionably paid.  So why, if Russia is denying a direct role in the military conflict, is only an alleged fighter on the Ukrainian side facing prosecution?