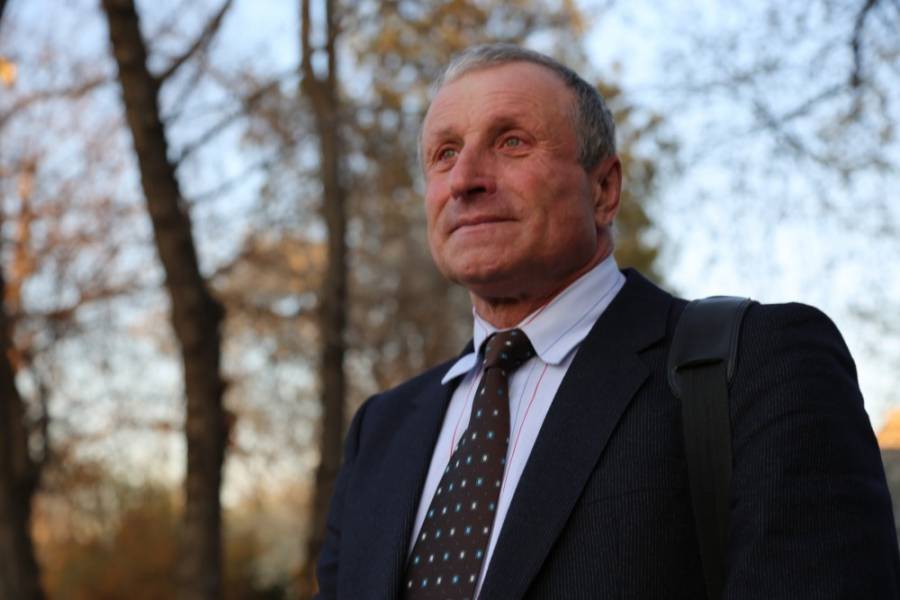 Russia is claiming that Mykola Semena sought to violate Russia’s territorial integrity in a text opposing Russian annexation, although it has never withdrawn from international conventions which recognize Crimea as Ukrainian.  The charges against the 67-year-old Ukrainian journalist are therefore, absurd, as his lawyers are determined to demonstrate.

It is probably due to this determination that the first ‘open hearing’ in the journalist’s trial in Russian-occupied Crimea proved open in name alone.  Despite at least two large courtrooms being free, the hearing was held in a much smaller room with room for only 4 members of the public.  As reported, the hearing was originally scheduled for March 20, but was postponed because of the cramped conditions provided.  The only improvement made this time, was that Semena had room to spread his papers out on the desk, rather than on the floor.

Semena is charged under Article 280.1 of Russia’s criminal code with what the prosecution claims were ‘public calls to action aimed at violating Russia’s territorial integrity’.  He is alleged to have done this by an article in which he defended the civic blockade of Crimea which had just been initiated with very specific human rights demands.

The hearing began with the prosecution reading out the indictment which the journalist rejects. As Semena later explained to Krym.realii, he upheld his right and that of any journalist to express his point of view and take part in the international discussion on Crimea’s status.  “I explained in my objections to the charges that for three years Crimea’s status has been, at very least, disputed. It is discussed on a world scale, and any journalist or media has the right to take part in this discussion and express their point of view freely in accordance with the constitutions of Ukraine and the Russian Federation.  There is nothing criminal in that”.

The court apparently spent a lot of time establishing that he was the author of the said article although Semena had himself acknowledged that the text was his at the first interrogation on April 19, 2016.

What was not discussed, Semena notes, was the key point which the defence will demonstrate, namely that there is no element of a crime in the text.

Semena’s lawyers Emil Kurbedinov and Alexander Popkov report that the testimony of two FSB officers involved in the case left all crucial questions unanswered.  Popkov explained later that the officers had not been able to give any legal grounds for having carried out extremely close surveillance of Semena, including following his every move on the computer before a court order was obtained.  One of the FSB men claimed without any detail that there had been other court orders about different tapping.  This point is very important, Popkov notes, since either the FSB carried out the surveillance illegally, or they have now, in court, revealed information which was classified as secret.  Kurbedinov adds that the defence even suggested holding the hearing behind closed doors so that the FSB could reveal the supposed court orders.  The application was rejected.

The court also heard two ‘witnesses’ from the local authorities who were in fact only there because they had read the article and told the FSB that they didn’t like it.

With this, the first hearing in this extraordinary ‘trial’ ended.

Semena is facing a mandatory 5-year sentence for an article entitled “The Blockade – a necessary first step to the liberation of Crimea”.  The text was written in September 2015, in response to another opinion post which expressed concern over the hardships this peaceful civic blockade could cause.

The author of the article points out that Crimea had been under Nazi occupation for 2.5 years and must not be under Russian for any longer. He uses ‘military’ language about the Blockade, but very clearly as a metaphor for the degree of determination and organization involved.

“Yes, Ukraine will never bring war to Crimea, that’s true.  Because it [war] was brought there by Russia.  The fact that in Crimea there is no military action now, is to the credit of Ukraine, not of Russia.  Ukraine handed Crimea over when it was not able to defend it, but that doesn’t mean for ever.”

It is on the basis of this text that Mykola Semena, whom veteran Crimean Tatar leader and Ukrainian MP, Mustafa Dzhemiliev has called one of the most decent and honourable journalists he knows, is facing a mandatory 5-year sentence.  The charges are manifestly absurd, yet Russia has ignored international condemnation and has already placed the journalist on its extremely specific ‘List of extremists and terrorists’.

Popkov explains  that there is no crime with which to charge the journalist.  Russia’s Constitution clearly stipulates that if there is a clash between Russian laws and its international agreements, the latter take precedence.  Except, it seems, when Russia has recognized that Crimea is Ukrainian, but those in the Kremlin want something different.