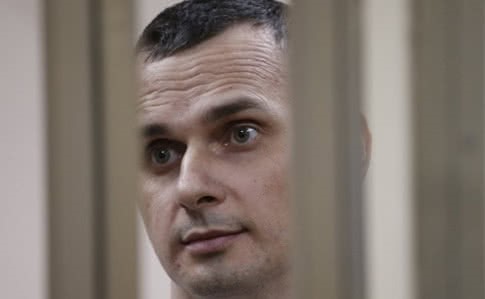 40 days after beginning an indefinite hunger strike, Ukrainian filmmaker Oleg Sentsov is experiencing heart and kidney problems.  His lawyer Dmitry Dinze has just visited him in the Arctic Circle prison where Russia is illegally holding him, and says that the doctors are warning that a crisis is imminent.  While the European Court of Human Rights has demanded full information about Sentsov’s state of health, and Ukraine’s Human Rights Ombudsman has been prevented from seeing him, Russia’s Ombudsman, Tatyana Moskalkova has presented her own extraordinary version of reality.

Moskalkova, a former Police Major General and MP is known for having claimed that there are no political prisoners in Russia, only ‘extremists’, and for a highly specific view of what her job entails.  In an interview to Novaya Gazeta on 20 June, she asserted that she is personally monitoring the situation with Oleg Sentsov and that her representative, Anatoly Sak is visiting him every day and even sends her photos. She claims that “Sentsov has not lost weight, he has even gained several kilograms” and talks about him receiving supportive therapy which she describes as “vitamins, glucose, protein”. Sentsov did agree to the therapy which was aimed at keeping his organs functioning as long as possible in the absence of food.  Whatever form such ‘therapy’ takes, it seems inconceivable that Moskalkova seriously believes her assertion that “this is effectively like therapeutic fasting”.

Why, if she thought that Sentsov had gained weight, would her representative be visiting the prison each day and why would Sentsov be in the medical unit under constant medical supervision?

During Dinze’s visit on 21 June, Sentsov dismissed Moskalkova’s claims, which his lawyer rather charitably suggests are due to misinformation from her representative. Sentsov confirmed that Sak has photographed him, but says that Sak refused to pass the photos to Ukraine’s Human Rights Ombudsman. Nor, in fact, did Moskalkova reveal the photos which she would surely have done, had there been any truth in her assertions.

Dinze explains that Sentsov drinks 3.5 litres of water per day, and gets an infusion with a large amount of glucose, amino acids and vitamins,  He has certainly not gained any weight, quite the contrary.  He originally weighed 90 kilograms, with this having fallen to 77, and then stabilized, though he is losing 100-200 grams in weight per day.

It was the prison doctors who warned Dinze that a crisis is imminent.  There was a partial crisis on 16 June when Sentsov was taken to the public hospital.  There a doctor in emergency care suggested placing him in emergency care and beginning force-feeding.  Sentsov, however, wrote a statement, rejecting both hospitalization and force-feeding, and he was returned to the prison.

Oleg also rejected the call from the European Court of Human Rights for him to end his hunger strike.  He sent greetings to the Court in Strasbourg, while noting that his application was given priority status, and yet there has been no progress on it for years (since July 2014).

The European Court of Human Rights responded on 20 June, also demanding that the Russian authorities provide information immediately about Sentsov’s state of health.