Telling the truth about Stalin and the Great Terror gets historians arrested in RussiaRussia arrests second historian of Stalin’s TerrorRussia turns to politically-motivated excavations to rewrite history of Soviet Terror after jailing one of its main historiansRussia brings new fabricated charges against historian of the Terror Yuri DmitrievRussia reinstates political trial of historian of the Terror Yuri DmitrievRussian Historian of the Terror Yuri Dmitriev acquitted of main chargesRussian historian faces 9-year sentence for exposing the victims and perpetrators of Stalin’s TerrorSerbsky Institute dismisses insane charges in Russia’s trial of historian of the Terror Yury DmitrievRussia turns to punitive psychiatry as its trial of jailed historian of the Terror collapsesIn Russia level of support for murderous dictator Stalin reaches record highStalin, Putin and ‘annexation of Crimea’ adorn new Russian Defence Ministry churchRussian Deputy Defence Minister: ’Why should we be ashamed of Stalin?’Crimean Tatar veteran’s civic journalist son sentenced to 16 years by Russia on same charges as Stalin used against her grandfather Terror and Stalin era charges in Russia’s fabricated case against Crimean Tatar leader Nariman Dzhelyal Every second Russian supports a monument to Soviet dictator Stalin Russian libraries purge books telling ‘the wrong history’ about the USSR in WWII Russians name Stalin as the most ‘outstanding’ figure of all times Russian FSB torture Ukrainian journalist 84 years after Stalin’s NKVD killed his grandfather Comparing Stalin to Hitler could soon get you prosecuted in Russia, saying they both invaded Poland already hasCrimean Tatar children told that their grandparents deserved Stalin’s Deportation
• Topics / News from the CIS countries 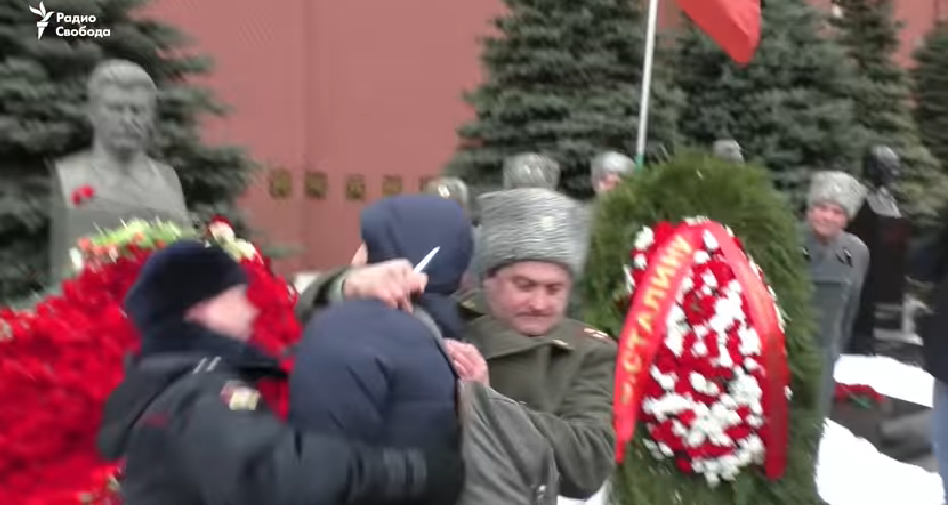 Two Russian activists were detained, one very roughly, in Moscow on 5 March for marking the 56th anniversary of the death of Joseph Stalin by hurling broken flowers at his tomb near the Kremlin wall, with one shouting that the “executioner” should “burn in hell”.  Theirs were among the very few voices trying to remind the steady flow of Russians waiting with flowers that they were paying homage to a bloody dictator responsible for the deaths of millions.

There have always been some hardened communists who would bring flowers on the anniversary of Stalin’s death on 5 March 1953, however the ‘rehabilitation’ of the dictator, if not his downright glorification, has gained pace over the 18 years since Vladimir Putin first became Russian President.  Although the ‘two carnations for Comrade Stalin’ is a communist party idea, the pomp and the officials from the Federal Guard Service [FSO] overseeing the queue to Stalin’s tomb on 5 March seemed anything but a private initiative.

Radio Svoboda reports that whole families turned up and a number of organization brought wreaths. Estimates of the number of people who came to honour a mass murderer vary, from 300 to 500, but the Federal Guard officers made sure that the  small number of elderly relatives of victims of Stalin’s Terror calling for sanity were kept on the other side of their barriers.

It was the two young activists from the initiative #Decommunization who chose a different form of protest.  Yevgeny Suchkov can be seen here shouting that “Stalin, executer of peoples, of women and children, should rot in hell”. This, and his hurling broken flowers at the monument, provoked a thoroughly excessive response from the Federal Guard officers who seized him violently and pinned him to the ground. He and Olga Savchenko were taken to a police station.  They were later released, however OVD.info reports that a protocol on administrative charges was drawn up.  They are accused, under Article 20.2.2. of the Code of administrative offences, of something called ‘organizing mass simultaneous presence of citizens’.

82-year-old Alexei Nesterenko is the son of a so-called ‘enemy of the people’, murdered during the Terror.  He and other relatives of Stalin’s victims tried in vain to get through to those bringing their flowers to the dictator, and then read out an appeal to Putin, asking that a law be passed ‘On prohibiting the glorification of Stalin’.

“Such a law is needed to prohibit the justification and denial of political repression, so that the organizers from the Russian Communist Party and other communist organizations and parties don’t dare anymore to hold actions to glorify a criminal”.

They propose also considering the possibility of holding the organizers of such events criminally liable for public justification of the propaganda of terrorism, as well as of extremism.

Their petition calling for such a law has gained over 11 thousand signatures.

Some of the very elderly people who came to express their outrage, and wish for such a law had been thrown into children’s homes after both parents were arrested.

Both of 82-year-old Yulia Sinite’s parents were executed.

“I was deprived of a childhood, I never knew at all what it is to have a mother and father.  That pain has remained in my heart all my life.  I want our government, our leaders to bear repentance for the victims of political repression.”

Under the present Putin regime, there is no sign of that happening, quite the contrary. In his interview to Oliver Stone in 2017, Putin claimed that the so-called ‘demonization’ of Stalin was aimed at undermining the Soviet Union and Russia, and both his minister of culture Vladimir Medinsky and education minister, Olga Vasilyeva are on record for statements that either deny or try to downplay the scale of Stalin’s crimes.  Stalin’s role in the Second World War is very much whitewashed, and the fact that the Soviet Union was Nazi Germany’s ally until Hitler invaded on June 22, 2041 is ignored or presented in highly manipulative fashion.  At least one Russian has been prosecuted for reposting a Ukrainian text that stated, quite accurately, that the Soviet Union had attacked Poland in 1939.

All of this coincides with Russia unwarrantedly keeping vast amounts of archival material secret, and persecuting those historians, like Yuri Dmitriev and Sergei Koltyrin, as well as the Memorial Society for telling the truth about the Terror and its perpetrators.

It is no wonder, therefore, that in January 2017, the Levada Centre found a record number of Russian citizens (46%) viewed Stalin “with admiration, respect, or liking” (4%, 32% and 10%, respectively).  In June, the same centre reported that the number of people critical of Stalin’s role in the Second World War had reached a record low.

In June 2017, the same Levada Centre published the results of a survey repeated every five years since 1989, in which Russians are asked to name the most outstanding figures ever.  According to the table, the list is open, with respondents themselves naming people.  If in 1989, only 12% named Stalin, that figure now stands at 38%, with Putin and the great poet Alexandr Pushkin tied in second place with 34%.

Two of the heinous crimes of Stalin’s era – Holodomor 1932-33 (the manmade famine in Ukraine), and the 1944 Deportation of the Crimean Tatar people are recognized in Ukraine as acts of genocide.  The list of Stalin’s crimes and victims is very much longer.