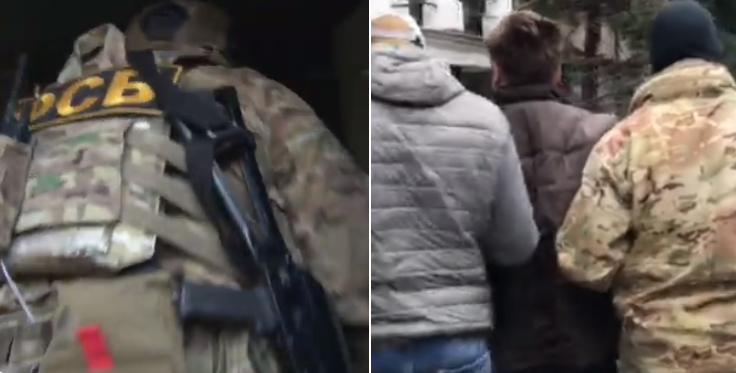 Russia’s FSB have brought more persecution of Crimean Jehovah’s Witnesses with at least six armed searches on 20 March and subsequent detentions. 34-year-old Artem Gerasimov was taken away to Simferopol and it is unclear as yet whether he is to remain in custody.  This new offensive against believers in Russian-occupied Crimea comes as a second Jehovah’s Witness in Russia is likely to receive a long prison sentence in the coming days, and as the number of Russians arrested, some tortured, for their faith is increasing at a frightening pace.

Russian and Russian-controlled media have all parroted the FSB’s claim on 20 March that it has “uncovered a Jehovah’s Witness cell” in occupied Yalta.  The FSB even produced a video showing how armed men in masks surged into one home, pinning an unarmed man’s hands behind his back and demonstrating religious material, including the Bible, as though it were ‘evidence’.   They are then seen taking the man, seemingly 34-year-old Gerasimov, away before descending upon other believers.

No names or numbers of searchers were given, however the ‘Jehovah’s Witnesses in Russia’ website reports at least six searches in Yalta and nearby Alushta and says that criminal proceedings have been initiated under the article of the Russian criminal code entitled ‘organization of the activities of an extremist organization’. Only Gerasimov was taken to Simferopol, while the others were presumably released after being taken away for interrogation.

This is the second ‘operation’ carried out by the Russian FSB in occupied Crimea.  During the first, in the night from 15-16 November 2018, searches were reported of up to 30 homes in Dzhankoy.  78-year-old Oleksandr Ursu was manhandled, and Serhiy Filatov, a 46-year-old father of four, arrested.  Filatov is facing so-called ‘extremism’ charges, however is not in detention.  Then too, the Russian reports claimed that Filatov was the ‘head of a local cell’.  In fact, the Jehovah’s Witnesses have Elders of the Church, but do not have ‘heads’ as such at all.

Russia is flouting international law which strictly prohibits it from imposing its legislation in occupied Crimea, and the new criminal cases are likely to be the same as the charges brought against Filatov.  These are under Article 282.2 § 1 of Russia’s criminal code (‘(‘organizing the activity of a religious organization whose dissolution has been ordered due to extremist activities’)  which can carry a prison sentence of between six and ten years.  The criminal code does not define the word ‘extremist’, requiring only that there have been a court ruling calling the faith or organization ‘extremist’.

Russia’s invasion and annexation of Crimea was the first annexation since Adolf Hitler’s aggression before and during Second World War.  Russia’s persecution of Jehovah’s Witnesses is also following in the tracks of both the Nazi and the Soviet regimes, and it was always a question of time before it began arrests in occupied Crimea.

The first arrest in Russia came only just over a month after Russia’s Supreme Court chose Hitler’s birthday, on 20 April 2017 to issue its ruling banning the Jehovah’s Witnesses as supposedly ‘extremist’.  Dennis Christensen, a Danish citizen living in Russia, was remanded in custody on 25 May 2017, and sentenced on 8 February 2019 to six years’ imprisonment.   At its last count, the Memorial Human Rights Centre reported that 81 Jehovah’s Witnesses are being persecuted for their faith, with a large number of them in detention.