Ukraine urged to show Italy that soldier Vitaly Markiv is innocent, or face Russia being seen as ‘liberator’Ukrainian soldier sentenced in Italy to 24 years for journalist death in Donbas after gravely disturbing trialBaffling denial by Italy of war in Donbas as excuse for trial of Ukrainian soldier MarkivMarkiv Trial: Film finds witnesses, Russian propaganda & answers to vital questions the Italian prosecutor didn’t askCrucial tests in Donbas should overturn Italy’s 24-year sentence against Ukrainian soldier MarkivVital evidence proves that Ukrainian soldier Markiv had nothing to do with Italian journalist’s deathAppeal begins in Italy against shocking 24-year sentence of Ukrainian soldier Vitaly MarkivInternational human rights defenders find critical failings in Italy’s trial & 24-year sentence of Ukrainian soldier MarkivUkrainian soldier Vitaly Markiv acquitted and freed in Italy!Italy detains Ukrainian theatre director who left Russia in 2014 in protest at its aggression against Ukraine Italian public broadcaster pushes Russian lies about MH17 and war in Donbas Russia waited till Ukrainian civilians reached work to bomb Mykolaiv Regional Administration Putin will continue attacking until Russia is stopped. Help Ukraine defend its freedom today!Russia kills Minsk Agreement, with lives of over 300 Ukrainian hostages and POWs in danger Russia is already holding many Ukrainian POWs without any declaration of warRussian parliamentarians move to ‘defend compatriots’ by recognizing Donbas pseudo ‘republics’ Ukrainian accused of torturing hostages at Russian-controlled Izolyatsia secret prison flees to France and "asks for political asylum’“Memorial” cannot be closed – it is the need to know the truth about the tragic past: statement of the Ukrainian human rights organizationsMother with grave health issues imprisoned by Russian-controlled militants for trying to save her sonRussia blocks OSCE conference when prevented from spreading disinformation about occupied Crimea and Donbas
• Topics / The right to a fair trial 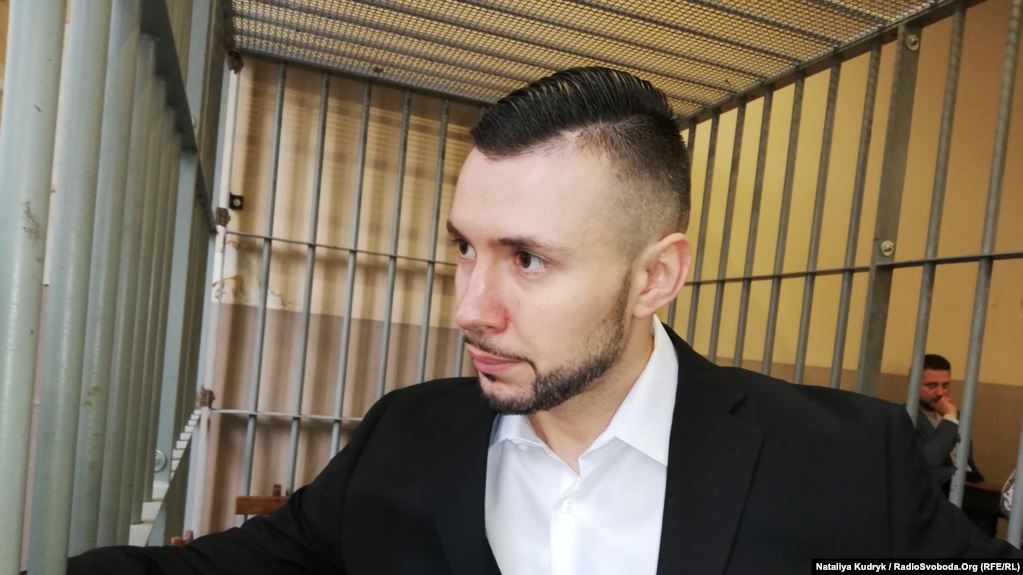 The court in Pavia, Italy which, on 12 July 2019, passed a 24-year sentence on Ukrainian National Guard soldier Vitaly Markiv, has finally published the explanatory part of the ruling.  Judging by first reports, the 176-page document in no way allays the serious concerns aroused by the very nature of the charges against Markiv.  Quite the contrary, since the document ignores crucial evidence presented by the defence, and the exceptionally harsh sentence is, it seems, in part because of Markiv’s consistent denial of any wrongdoing.

Markiv was accused of involvement in the deaths on 24 May 2014 near Sloviansk of Italian journalist Andrei Roccelli and Andrei Mironov, the Russian rights activist who was acting as his interpreter.  The two men were killed by mortar fire while effectively in a war zone, with neither man having had official press accreditation, nor wearing anything to indicate that they were journalists.  Mironov, in fact, was wearing camouflage trousers (like many, if not all, of the Russian or pro-Russian fighters in the area).

The Italian prosecution seemed bafflingly unwilling to recognize that this was a battle zone and that Markiv was a soldier in service, and obeying orders.  They claimed that Roccelli’s death had been murder, and that those who killed them had known them to be journalists.  This was evidently accepted by the jury and is now asserted in the court ruling, although the shelling was from almost two kilometres away, and the men were not wearing anything to show that they were journalists.

The prosecutor initially accused Markiv of murder, but was forced to change that charge to ‘involvement’ since Markiv himself had no access to the mortar shells which killed the men. Markiv was supposed to have provided information to the Ukrainian Army about Rocchelli’s whereabouts.  The charges appear to be based solely on the contradictory testimony of the French journalist who was travelling with Roccelli and Mironov, and on a dangerously free interpretation of a telephone conversation reported in the media which the prosecution very strangely presented as being Markiv’s ‘admission of guilt’.

The court concluded that Markiv, as a soldier of the National Guard, had helped to murder the foreign journalists on the outskirts of Sloviansk, which was occupied by Russian/pro-Russian fighters.   The document claims that “Markiv played an active part in what is called “the ambush of the journalists”.  He is asserted to have been on Mt Karachun where he is supposed to have seen the ceramic factory Zeus Ceramica and the railway, near which Roccelli and Mironov were killed.

Since the court asserts that the events were as described in an article by Ilaria Morani published in Corriere della Sera on 25 May, 2014, it is important to see what this, in fact, stated.   Morani misleadingly calls Markiv “a captain”, and says that he was “on the tower at that time coordinating the defence of the city.”

The following is allegedly what Markiv said (the ‘we’ is rather confusing, however he was clearly telling the person he was speaking to that they should not approach).

Despite being provided with evidence of Markiv’s true rank-and-file position, the court has repeated Morani’s misleading designation of Markiv as being in charge.

The court asserts that “even in the absence of any plans for an armed attack by the enemy, having suspected movement of the journalists in the direction of the train, he began acting, “shooting at everything that moved in a radius of two kilometres”, and it would appear that this was the normal practice of the joint military action of the National Guard and Armed Forces”.

The text goes on to assert that Markiv himself confirmed this when he said that even where there was no active combat, they were suspicious of civilians and viewed them as potential adversaries who could provide information to the separatists.

The court document then alleges that Markiv first took part, using a Kalashnikov rifle in gunfire against the journalists.  It claims that when he couldn’t reach his target, he continued to observe the journalists, informing the commander in order to hit the taxi and to kill the targets (the journalists) in the forest where they were hiding.  He is alleged to have used radio equipment to provide the military coordinates of the journalists for them to use mortar fire.  The latter wounded French journalist William Roguelon and killed Rocchelli and Mironov.

The court even claims that Markiv was carrying out an evidently unlawful order which violates the Fourth Geneva Convention regarding the protection of civilians during conflict.   It goes on to assert that the Ukrainian soldiers’ ‘attack’ occurred without any provocation or attack from the enemy and that it was “aimed against journalists exercising their right to gather information about the conflict”

These are extraordinary assertions which ignore critical evidence presented by the defence, indicating that there had been gunfire prior to the use of mortar fire, and that this came from the militants, not from the Ukrainian army.  There was no unprovoked attack on journalists, but an exchange of weapons in a war zone, in which journalists without press vests or other visible signs were tragically killed.

The court ruling called Markiv’s testimony contradictory and claimed, rather disturbingly, that it was the defence who had failed to prove that Markiv was not involved.

In fact, the testimony of Roguelon, the surviving journalist, proved much more contradictory.  Back in 2014, he acknowledged that he did not know where the initial gunfire had come from.  It was only four years later in 2018, during the trial of Markiv, that he suddenly ‘knew’ that it had come from up the hill, and therefore from the Ukrainian army position.

During one of the final court hearings, on 23 June,  Defence lawyer Niccolo Bertolini Clerici asserted that not one of the over 30 witnesses questioned in court had confirmed that Markiv had been on duty on Mt. Karachun on 24 May, as well as that he had been at the military post from where, according to the prosecution, he had been able to see the movement of journalists near Zeus Ceramica.

Clerici also pointed to the evident incongruity between the evidence that Markiv had warned journalists to stay away and the prosecution’s claim that he was involved in deliberate murder.

The defence also pointed to evidence confirming that the shooting had come from bellow, and therefore from the militants.  Roguelon, for example, recalled hearing a sniper shot, which he could not possibly have heard from a distance of two kilometres.  The angle at which the bullets hit the taxi also suggested that they had come from the militants who the owner of Zeus Ceramica has confirmed were surrounding the factory, and not from above.

This changes the entire picture.  There was no ‘violation of the Fourth Geneva Convention’, but a war situation in which one side reacted to gunfire from the other.  While it is probably true that any gunfire from the militants below could not have hit the Ukrainian soldiers on Mt Karachun, this was a military conflict, into which journalists had gone without proper clothing and against express warnings, including from Markiv.

Markiv is also represented by a renowned Italian lawyer, Raffaele Della Valle.  During his 6-hour address to the court, he pointed out that the prosecution had also ignored a video recording providing still further evidence that the original gunfire came from the militants.  This is probably the last video with Mironov, who is saying that “Somebody is sitting nearby and shooting, and there are also mortar guns here”.

Della Valle was blistering about the fact that Morani’s article had formed the basis of this trial, with both the prosecutor and civic claimants trying to present this as Markiv’s ‘confession’.

In order to make her story more ‘newsworthy’, he said, Morani had inflated Markiv’s position.  Her misleading use of the term ‘captain’ clearly influenced the judges and jury, since the mistake is repeated in the ruling.  Markiv was no ‘captain’, nor did he have any ability to order others.  He did not have any access to mortar fire, nor was he on the tower from which he could have observed the journalists.  He was merely responsible for guarding the television tower.   When questioned in court, Morani had acknowledged that the words in the text were not verbatim, and claimed that she “had got the impression that Markiv was a captain”.  In fact, Morani herself was reporting a conversation that Markiv had by telephone with her colleague, Marcello Fauci, a conversation that was not recorded and cannot be checked.

If Markiv really had ‘confessed’ to the journalists to involvement in the murder of their colleague, they would have reacted quite differently, Della Valle said.  They would have probably informed the police and certainly Fauci would not have looked up Markiv several months later to get a bulletproof vest from him.

None of these and other compelling arguments seemed to have impact on the jury and the court which, on 12 July, came up with a shocking 24 year sentence – 7 years more, even, than had been demanded by the prosecutor.

The defence now has a month and a half to prepare the appeal.