Next, Russia will come for the children 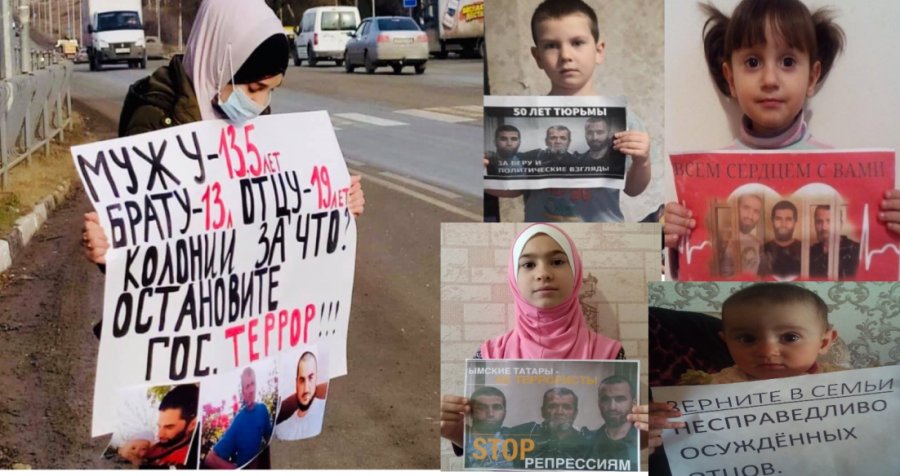 Fatma Ismailova and some of the children with placards in support of Enver Omerov, his son Risa Omerov and Aider Dzhapprov Photo Crimean Solidarity

Over one thousand people have taken part in flash-mobs and other acts of solidarity with three Crimean Tatar political prisoners facing horrifically long prison sentences next week.  The whole of Russia’s political and religious persecution of citizens of Ukraine who have committed no crime is shocking, but here children have seen their father, grandfather and uncle all taken away.  Will they come for their mother next?  Or for the children themselves?

A huge number of people have posted photos of the three men, spelling out that the 50 years demanded are for the men’s faith and political views.  Those who know them have ‘become their voice’, expressing solidarity in taped messages.  Under Russian occupation, each such act will doubtless be noticed by the FSB and, therefore, demands courage.

Fatma’s husband, Rustem Ismailov, was arrested on 12 October 2016, together with four other Crimean Tatars, all law-abiding members of the community, and devout Muslims. This was the third wave of persecution in 2016, with the first having finally attracted international attention due to the targeting of human rights activist Emir-Usein Kuku.  All of the men arrested that year, including Ismailov, have been recognized as political prisoners, whose release has been demanded by the UN General Assembly, the European Parliament and other bodies. They are serving grotesque sentences for unproven ‘involvement’ in Hizb ut-Tahrir, a peaceful Muslim organization which is legal in Ukraine and most countries.  The Russian Supreme Court’s ruling in 2003 declaring Hizb ut-Tahrir ‘terrorist’ was passed in secret and probably for political motives (to enable Russia to forcibly return asylum-seekers to Uzbekistan where they faced torture and religious persecution).

Rustem and Fatma have two small sons and a daughter.  Fatma got through the next two and a half years in part because of the huge support she received from her father, Enver Omerov and brother Riza Omerov.  She and her father were travelling to Rostov for the latest court hearing in Ismailov’s ‘trial’, during the night from 9-10 June 2019,  when they were stopped by the FSB who arrested Enver Omerov on the same fundamentally flawed charges as those against his son-in-law.  Armed searches were also carried out in the morning of 10 June in Belogorsk, with Riza Omerov also arrested, as well as Aider Dzhapparov, an active member of the local Muslim community, who had faced harassment from immediately after Russia’s invasion and annexation of Crimea.

Fatma and Sevila Omerova and their children are now living with Fatma and Risa’s mother, who has lost both her husband and son.

In declaring the Omerovs and Dzhapparov political prisoners, the Memorial Human Rights Centre yet again stressed that Russia is in breach of international law in applying its legislation in occupied Crimea. It pointed out that they are accused under Russia’s terrorism legislation although there is nothing to warrant Russia’s treatment of Hizb ut-Tahrir as ‘terrorism’ and the men themselves are not accused of any crime or plan to commit a crime.

These ‘trials’, which are known to provide the FSB with promotion or bonuses, all follow a certain pattern, with one or more of the defendants designated as ‘organizers’ (under Article 205.5 § 1 of Russia’s criminal code) and others accused only of ‘involvement’ (Article 205.5 § 2) .  In this case, Enver Omerov and Aidar Dzhapparov are facing the more serious charge, with the prosecution claiming that together they organized a Hizb ut-Tahrir group, which Riza Omerov is supposed to have been involved in.  On 27 February 2020, it was learned that all three men were also being charged with planning violent seizure of power.  According to the Memorial Human Rights Centre, this extra charge in Russia is frequently used by the FSB against those who refuse to ‘cooperate’ with the investigators by accepting the absurd charges.  In occupied Crimea, none of the Ukrainian Muslims has agreed to ‘cooperate’, and the charges have become a standard part of the FSB’s arsenal.  Not one of the armed searches of the men’s homes found even a weapon, nor are they accused of having planned any act of violence.

It is not only the charges that are so flawed.  The prosecution’s ‘evidence’ consists of illicit tapes in which the men were discussing religious topics, the persecution of Muslims in Russia and similar.  Russia’s FSB uses its own unqualified ‘experts’ to listen to these tapes and claim that a word or phrase ‘proves’ that the men are members of Hizb ut-Tahrir.  To this, they add ‘secret witnesses’ whose testimony cannot be verified, and who generally have problems answering the defence’s questions and often seem to be prompted by somebody probably sitting in the room with them.

All of this has already been seen in the ‘trials’ of Ismailov, Kuku and very many other Ukrainian Muslims, yet the judges from the notorious Southern District Military Court in Rostov have, almost without fail, provided the appalling sentences demanded.  On 23 December 2020, prosecutor Dmitry Volkov asked for a 19-year harsh regime sentence against 59-year-old Enver Omerov; 18 years against 40-year-old Aider Dzhapparov and 13 years in the case of Riza Omerov.

The verdicts are expected this coming week, with the behaviour during the trial of presiding judge Roman Saprunov, Rizvan Zubairov and Maxim Nikitin leaving little reason to expect the only just outcome, a full acquittal.