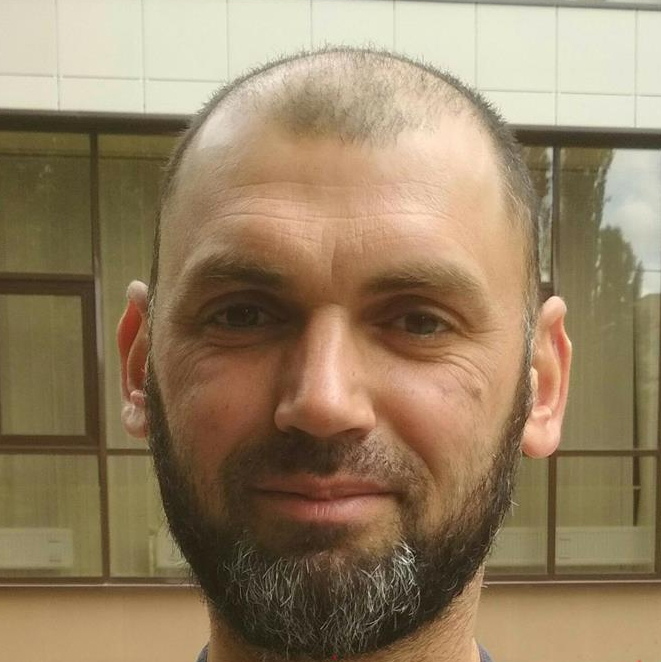 Rustem Sheikhaliev was first at the Rostov ‘military court’ in December 2018, reporting on the trial and horrific sentences against four recognized Crimean Tatar political prisoners.  The Crimean Solidarity freelance journalist had time to provide  coverage for the next such ‘trial’ of five other political prisoners, before the Russian FSB came for him on 27 March 2019, together with 22 other civic journalists and activists.  In a letter to his family from Russian captivity, Sheikhaliev writes of the strange feeling, entering this same court, in handcuffs, for his own ‘trial’.

Sheikhaliev is 41 and not a journalist by profession.  Until the events of 2014, he worked in a market to provide for his wife and three children: Renat, Dzhelyal and Zulfiye, and also played an active role in his community.

It was impossible not to react to the ever-increasing number of armed searches and arrests of Crimean Tatars and he began attending ‘court hearings’ in occupied Crimea; organizing vital parcels of food and other essentials to send to political prisoners; and also helping the families of the men taken away.  He became a civic journalist in 2015, livestreaming political hearings, where possible, or posting photographs and information about such hearings, armed searches, etc. Russia has essentially crushed any independent media in occupied Crimea and forced professional journalists into silence or exile, and the work Crimean Solidarity, and particularly such civic journalists, carry out is absolutely invaluable. It has also proven to be very dangerous.

The ‘operation’ that began on 27 March 2019 was the largest-scale wave of armed searches and arrests since Russia invaded and annexed Crimea in 2014, and it clearly targeted civic journalists and activists, most of whom were from Crimean Solidarity.

The FSB and armed officers who burst into the Sheikhaliev home came, illegally, with their own supposed ‘witnesses’ and did not allow a lawyer to be present.  In at least some of the cases, the refusal to admit lawyers is likely to have been because the officers brought the so-called ‘prohibited literature’ that they then claimed to have ‘found’.

Sheikhaliev and the other 22 men seized that morning or, in three cases, later that evening, were taken almost immediately to Russia.  Such speed was unprecedented and presumably aimed both at deflecting attention from the mass operation and at maximum terrorization.

The overt targeting of civic journalists and activists was very widely condemned.  Both tthe US State Department and the EU called the move illegal and demanded the men’s release. Human Rights Watch called the arrest “an unprecedented move to intensify pressure on a group largely critical of Russia’s occupation of the Crimean Peninsula” and stated unequivocally that attempts “to portray politically active Crimean Tatars as terrorists” is aimed at silencing them. Freedom House and Civil Rights Defenders called the arrests “yet another serious abuse of power by the de facto authorities, transparently aimed at striking fear into a community that has suffered severely during Russia’s occupation of Crimea”.  The Memorial Human Rights Centre was swift to declare all the men political prisoners and denounce the attempt “to crush the Crimean Tatar human rights movement”.

The Committee to Protect Journalists has written about the persecution of Sheihaliev and notes that “Russia has a track record of using terrorism and extremism laws to silence critics and muzzle independent news coverage.”

Charges but no crime

Not one of the men has been charged with a recognizable crime and it is telling that the armed searches essentially looked only for telephones, memory sticks, etc. and ‘prohibited literature’.

Sheikhaliev and 24 other men are accused only of unproven ‘involvement’ in the Hizb ut-Tahrir movement, a peaceful Muslim party which is legal in Ukraine and which is not known to have carried out acts of terrorism anywhere in the world. Russia has never provided any grounds for its highly secretive 2003 Supreme Court ruling that declared Hizb ut-Tahrir ‘terrorist’, yet this inexplicable ruling is now being used as justification for huge sentences on supposed ‘terrorism charges’.  Some of the men are facing the more serious charge of ‘organizing’ a Hizb ut-Tahrir group (Article 205.5 § 1 of Russia’s criminal code).  There is no proof that such a group even existed, yet the men face sentences of around 20 years or even life imprisonment. The other men, including Sheikhaliev, are charged under Article 205.5 § 2, with ‘involvement’ which still carries a sentence of 10-20 years.

Russia has split up the 25 activists and journalists into five groups, with each facing identical charges on the basis of the same ‘evidence’. Sheikhaliev is one of three civic journalists in his ‘group’, together with Osman Arifmemetov and Ruslan Suleimanov.  Enver Ametov also attended political trials, while Yashar Muyedinov is an activist for Crimean Solidarity.

There has been at least one trial of 19 political prisoners in Russia and it seems likely that the logistical difficulties were not the only reason. Lawyer Emil Kurbedinov recently suggested that both the FSB and the courts get ‘better statistics’ out of splitting up one case into five clones.  They can claim to have concluded five ‘terrorism’ cases, and not just one, albeit with many defendants.

The other aim is doubtless to deflect attention from this persecution of Crimean Tatar civic journalists and activists and from each individual trial.

Since these ‘conveyor belt’ prosecutions are not based on any impugned criminal act, the term ‘evidence’ can only be used very loosely. There have been very few hearings so far, but it seems safe to assume that each of the five ‘cloned’ trials will cite the same so-called ‘expert opinions’ and ‘secret witnesses’.

In all such cases, there are illicitly taped conversations, normally of very bad quality, where the men discuss religion, politics, bringing up children and other subjects.  The FSB investigators then send these to its own ‘experts’ who can be relied on to claim that this word or that sentiment ‘proves’ a person’s involvement in Hizb ut-Tahrir.  On at least two occasions thus far, a properly qualified forensic linguist has given a damning assessment of both the ‘expert opinion’ and the qualifications of the individuals who provided it.

The FSB also use ‘secret witnesses’ whose claims cannot be verified.  The ‘testimony’ of such alleged witnesses is often contradictory or a suspicious mix of verbatim moments, normally those that echo the indictment, and ‘forgetfulness’, with the individuals ‘not remembering’ where they met the defendants, the layout of their office or other place where their alleged meeting took place, etc.

The European Court of Human Rights has already found that Russia violated the right to a fair trial over reliance on unverifiable testimony from a secret witness, and here such grossly unreliable ‘testimony’ is being used to get sentences of up to 20 years.

Russia’s ‘Hizb ut-Tahrir trials’ have been referred to as a conveyor belt of repression, with them increasingly used in occupied Crimea as a weapon against men who dare to tell the world about the persecution of their fellow Crimean Tatars and other Ukrainians.  It is near impossible to believe that any of those involved in initiating criminal investigations, especially when the testimony is from ‘secret witnesses’ genuinely believe that they are prosecuting men who have committed a crime.  The same applies to the courts who allow such dubious testimony and reject legitimate applications from the defence.  In this case, the judges who may pass sentences of up to 20 years are: Viacheslav Alekseyevich Korsakov (presiding); Denis Aleksandrovich Galkin and Igor Viktorovich Shendrikov.

Once the trial is over, failing a miracle, there would surely be an argument for seeking individual sanctions against all of those complicit.

The letters tell him that he is not forgotten, and show Moscow that the ‘trial’ now underway is being followed.