Donbas militants seize Ukrainian teacher trying to help her ailing mother Ukrainians tortured and imprisoned in Donbas for supporting Ukraine, with Russia blocking their release Elderly Donetsk hostage with hip fracture sentenced to 17 years for supporting Ukraine Russian-controlled militants sentence 70-year-old pensioner to 17 years for ‘spying’ after torturing him and his familyKherson journalist, imprisoned by the Russians, tells of killing, rape and torture of hostages Former child hostage spends 7th birthday in Russian captivity for wanting to live in free Ukraine Russia uses Kherson ‘evacuation’ for enforced disappearance of more Ukrainian hostages and POWs ‘Guilty’ of being Ukrainian: Teacher abducted by the Russian invaders and held incommunicado for six months Silence abets Russia in torturing and risking the lives of Ukrainian hostages and POWs in occupied DonbasAbducted 16-year-old was forced to clean up after Russian invaders" torture of Ukrainian POWs and hostagesRussia abducts 25 volunteers delivering humanitarian aid to Mariupol, threatens to put them ‘on trial’ Russia extends terror and abductions from occupied Crimea and Donbas to all of Ukraine Russian invaders torture and threaten to kill civilian hostage in revenge for their military losses Ukrainian POWs and abducted civilian hostages illegally imprisoned in Russian-occupied Crimea Russian invaders abduct Mayor of Prymorsk Oleksandr Koshelevych after first taking his elderly father hostage Russian Rule of Lawlessness in Occupied Crimea and DonbasRussian invaders take Mariupol intensive care hospital and its patients hostage Russia kills Minsk Agreement, with lives of over 300 Ukrainian hostages and POWs in danger Russia is already holding many Ukrainian POWs without any declaration of warRussian proxy Donbas ‘republic’ threatens death sentence after torturing young father into ‘confessing’ to being a Ukrainian saboteur
• Topics / The right to liberty and security 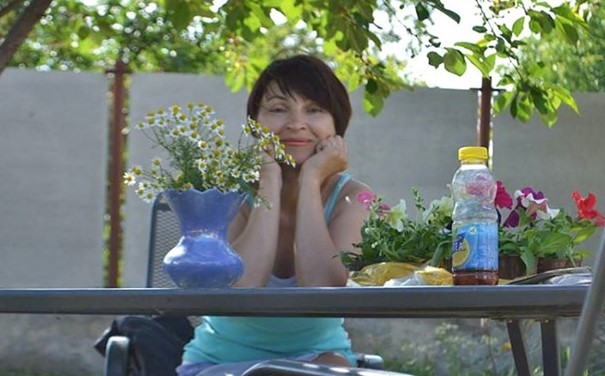 Lyudmila Huseinova has become the 2021 laureate of Ukraine’s National Human Rights Defence Award, although it may be some time before she learns of this.  The civic volunteer  and defender of children’s rights in occupied Novozavovsk has been imprisoned in the self-proclaimed and  Russian-controlled ‘Donetsk people’s republic’ [DPR] since October 2019.

Huseinova is the Civic Ombudsperson for Children’s Rights in occupied Donetsk.  After the area was seized by militants in 2014, she initiated a national movement to help children living in inhuman conditions in the village of Prymorske which is effectively on the frontline.  This involved regularly collecting and organizing the delivery of humanitarian aid for orphaned children and social orphans living at a boarding school / orphanage in Nozoazovsk which the Ukrainian authorities had not had time to evacuate.  The militants reportedly dissolved this institution and sent the children away, where possible, to grandparents, etc.   A very large number, however, ended up in the effectively frontline Prymorske.

Thanks to Lyudmila and the volunteers she mobilized, the children gained a library of Ukrainian Literature and computer.  She also made it possible for each child to receive cards from different parts of Ukraine, so that they would all know that they had not been abandoned and forgotten.  That, of course, did not fit the militants’ / Russia’s narrative.  Huseinova also stood up for the children’s rights before the so-called ‘DPR local officials’ and ‘police’.  She succeeded, for example, in securing the release of several children who had been forcibly place in a psychiatric unit for adults as supposed juvenile offenders.  She personally organized getting sanitorium treatment or care for children suffering from illnesses (anaemia, pleurisy) linked with the appalling living conditions.

Although her views are undoubtedly pro-Ukrainian, it seems certain that Lyudmila was seized because of her active human rights work.  She was first held for 40 days at the notorious Izolyatsia secret prison in Donetsk where both male and female hostages are savagely tortured.  After that, she was transferred to a Donetsk SIZO, or remand prison, where she remains imprisoned to this day.  The Zmina Human Rights Centre reports that Lyudmila continues helping people while imprisoned, using her contacts to look for relatives of women held prisoner with her in the hope that the relatives can help file applications for them to be allowed to serve any sentence in government-controlled Ukraine.

The militants this time have not just targeted one woman determined to help children in need.  They have also, as journalist Olha Musafirova wrote in April 2020, orphaned the children for a second time.

The award was presented by Ukraine’s Human Rights Ombudsperson Lyudmila Denisova and received on Lyudmila Huseinova’s behalf by her husband, Dmytro Parkhomenko.

Militants of the so-called ‘Donetsk and Luhansk people’s republics’ are known to be holding at least 300 prisoners of war and hostages, although the real figure is very likely to be higher.  Many are held in secret prisons, the most notorious of which – Izolyatsia in occupied Donetsk – is described by former inmates as a concentration camp.  Although the militants effectively admitted Izolyatsia’s existence a few days ago (details here), both Russia and its proxy ‘Donetsk republic’ formally deny that there are such prisons and prevent the International Red Cross and OSCE Special Monitoring Mission from visiting inmates.

There are known to be 30 women hostages, although once again, the real figure may be much higher.  One of the women, Oksana Parshyna was seized in May 2021, when three months pregnant.  There is no information about her condition, and that of the baby, however she has not been released.  Nor have several women with serious medical conditions: Olena Piekh suffers from epilepsy, while  Olena Zaitseva was probably released from Izolyatsia because several occasions of heavy bleeding made the militants fear that she would die under torture.   Natalia Statsenko, a doctor from Makiyivka, urgently needed surgery for a chronic spinal condition when she was seized in July 2019, and by now the situation is critical.

The same, it must be said, is true of many of the male hostages, with particular concern over the health of 71-year-old Vitaly Atamanchuk.