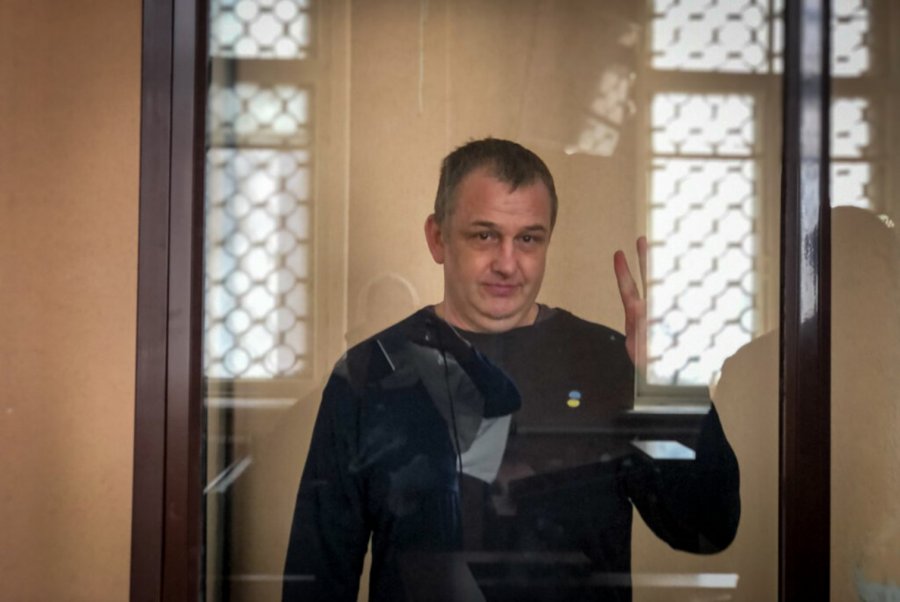 The grenade which Ukrainian journalist Vladislav Yesypenko is accused of carrying in his car in Russian-occupied Crimea does not fit in the car compartment where the FSB claimed to have found it.  This was not the only glaring discrepancy in the prosecution’s case demonstrated during the ‘court’ hearing on 13 December, yet prosecutor Yelena Podolnaya once again demanded and ‘judge’ Dlyaver Berberov  ordered that Yesypenko be held in detention until (at least) 18 March 2022, just over a year after he was first seized and imprisoned.

During the eleventh hearing on 13 December at the Russian-controlled Simferopol District Court, both the grenade and the ammunition pouch, as ‘material evidence’, were part of a highly revealing ‘court experiment’.  The defence lawyers, Taras Omelchenko and Dmitry Dinze, had asked for the material evidence to be brought in for the hearing, with Berberov having rejected the application with respect to the grenade, but allowed the other elements to be brought.

Fortunately, FSB investigator Vitaly Vlasov appears to have forgotten or not known this, and he sent all items that form part of the prosecution, including the grenade. The FSB claims that they found the grenade; pouch; tweezers and a line in the glove compartment of the journalist’s car.

Omelchenko therefore brought in a glove compartment identical to that in Yesypenko’s car.  After the hearing, Dinze explained what their videoed experiment had demonstrated, namely that the grenade could scarcely be squeezed into the pouch, and couldn’t be closed.  There was no way that it would go in if the detonator was also included.  Most importantly, the pouch did not fit inside the glove compartment, although the FSB claim that they removed the grenade and detonator.  The length of the grenade is much greater than the depth or width of the compartment – the latter would simply not have closed

These were by no means the first flaws in the case that the defence have highlighted. During previous hearings they questioned ‘expert’ Igor Galkin who was unable to explain some of the conclusions he had allegedly reached.  These were criticized by an independent expert, with reasons provided, however the judge refused to add the independent assessment to the case material.

Similarly FSB officer Dmitry Korovin was unable to provide any good reason why he allegedly suspected Yesypenko of preparing a grenade before the search which purportedly found such an item.  What were the grounds for the supposed ‘operational data’ that he cited.

The prosecution had accused Yesypenko of preparing the grenade from elements found in a hiding place organized by Ukraine’s Military Intelligence near the administrative border with mainland Ukraine.  Yesypenko was supposed, according to this version, to have picked up the elements of the grenade on 26 February and put the device together in Simferopol.

Yesypenko’s fingerprints are not on any of the items that the FSB claim to have found in his car.

On 13 December, after the above-mentioned experiment, prosecutor Yelena Podolnaya suddenly announced that the indictment was being changed from preparing an explosive to adapting it.  Dinze stated after the hearing that the defence have questions regarding this, but that these would be put during the coming court debate.

As reported here, Dinze spoke earlier about the glaring failings in this case.  The Moscow-based lawyer has had experience of many political trials, both of Crimeans and in his native Russia.  He notes that in occupied Crimea the situation for journalists is around ten times worse than in Russia, and the FSB clearly feel confident of their own impunity for all their violations.

Yesypenko is a freelance journalist who was on a job for Crimean Realities when he was seized by the FSB on 10 March 2021. The ‘spying for Ukraine’s SBU [Security Service], that Yesypenko says he was tortured into ‘confessing’ to on Russian state-controlled TV, was initially reported but is not in the indictment.  The latter contains two charges: the lesser one (under Article 222.1 of Russia’s criminal code) of possession of an explosive, and the much more serious charge (Article 223.1) of ‘preparing or adapting an explosive’.  All of this is based solely on the grenade which Yesypenko is supposed to have tampered with, yet which did not have his fingerprints on it.

The FSB prevented Yesypenko from seeing a proper lawyer for around a month, to break him into totally rejecting an independent lawyer, or to at least ensure that the torture marks were not formally recorded.  It was only during the first hearing, on 6 April, that the journalist was able to formally reject the questionable services of the ‘lawyer’ foisted upon him, Violetta Sineglazova, and state that he wished to be represented by Alexei Ladin and Emil Kurbedinov.

We know from Yesypenko’s account that he was stopped by traffic police on the way to Simferopol, with the FSB then turning up and forcing him to the ground. They immediately began a ‘search’ of his car during which they supposedly found the grenade.  He refused to sign the protocols of this ‘search’ and was told by an FSB officer in a balaclava that they would take him to another place where he would sign everything they told him to.

The initial announcement from the FSB on 16 March 2021 claimed to have “broken up spying and sabotage activities for the Ukrainian Security Service by Russian citizen Vladislav Yesypenko.”   The actual activities described in the report were those of any journalist, with Yesypenko having “taken photos and video footage of infrastructure and places where there are a lot of people in the republic of Crimea”. As has frequently been the case in occupied Crimea, the actual charges bear relatively little in common with the supposed ‘confession’ he gave to a Russian-controlled television station.

The next hearing is scheduled for 21 December.