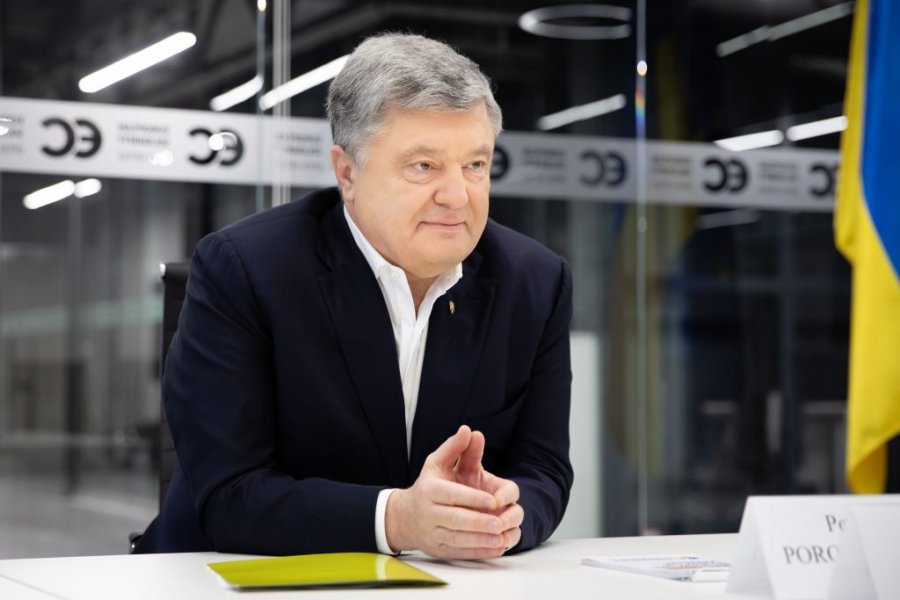 The Pechersky District Court in Kyiv has frozen the assets of Petro Poroshenko, former President of Ukraine and leader of the main opposition party. This is the latest move in the most serious of around 20 criminal proceedings brought very publicly against the main rival to the current President Volodymyr Zelensky.  Poroshenko is presently abroad, on what he and his European Solidarity party insist was a long-planned trip but which the State Bureau of Investigations on 6 January saw fit to dispute, also very publicly. None of the previous proceedings announced have reached a court of law and there seem grounds for doubting that the proceedings  in this case, on charges of ‘state treason’ (Article 111 of Ukraine’s Criminal Code) and of ‘abetting the activities of terrorist organizations’ (Article 258-3 § 1), will result in a court verdict.

A spokesperson for the Prosecutor General’s Office has stated that the court ruling, apparently passed by judge Vita Viktorivna Bortnytska, will only be made public on 14 January.  It is unclear why the prosecutor sought the freeze on what is Christmas Eve for very many Ukrainians (including the former President).  The spokesperson stated, however, that the freeze is on all moveable assets; real estate (flats and a building) and also corporate rights to various business entities. The former President’s lawyers will, of course, be lodging an appeal.

As reported, the State Bureau of Investigations [SBI] announced on 20 December 2021 that Poroshenko had been informed that he was suspected of ‘treason’ and ‘abetting the activities of terrorist organizations’.  The organizations in question are the self-proclaimed and Russian-controlled ‘Donetsk and Luhansk people’s republics’ [‘D-LPR’].  He is accused over Ukraine’s purchase of coal from parts of Donbas seized by the Russian / pro-Russian illegal armed formations in the summer and autumn of 2014.

The proceedings pertain to the Ukrainian government’s purchase of coal from occupied Donbas [the so-called ‘D-LPR’] in late 2014.  Poroshenko is accused together with Viktor Medvedchuk, the controversial pro-Russian politician and friend of Russian President Vladimir Putin; the Minister of Energy in late 2014, Volodymyr Demchyshyn and a businessman, Serhiy Kuziara.

According to the document outlining the accusations against Poroshenko, the four are alleged to have been  involved in a ‘scheme’ set up by Medvedchuk together with high-ranking Russian officials, to get the Ukrainian authorities to buy coal from ‘D-LPR’’.  The government had decided, with winter approaching, to buy coal from South Africa so as not to buy from the Russian Federation, with the first consignment of this coal arriving in October 2014.  The allegation is that Medvedchuk enlisted Poroshenko’s help to torpedo these supplies in order to get the coal bought from ‘D-LPR’.  At a meeting which Poroshenko convened of Ukraine’s National Defence and Security Council [NDSC] in November 2014, the then President expressed doubts about the price of the South African coal, and criticized its quality. Then the prosecutor’s office got involved, saying that the coal did not burn and initiating a criminal investigation, after which South Africa, understandably, stopped supplying its coal.  Kyiv then agreed to buy coal from ‘D-LPR’ with Demchyshyn purportedly appointed Minister of Energy in order to organize this, and Kuzyara directly involved in the agreements with ‘D-LPR’.

In October 2021, under a new President and with Medvedchuk and Poroshenko leaders of the main rival political factions in the Verkhovna Rada, the prosecutor’s office and SBU asserted that the South African coal had been of good quality. No evidence appears to have been presented or explanation as to how this conclusion was reached.

It seems worth noting that there had been earlier charges of treason (and attempted theft of property) against Medvedchuk back in May 2021, with these clearly referring to alleged actions from which he could gain benefit. Those charges were signed by Prosecutor General Iryna Venediktova.  She was also involved in a press briefing on 8 October 2021, where the new charges were announced against Medvedchuk and Kuziara.  The diagrams shown linked the two both to high-ranking Russian officials and to “high-ranking Ukrainian state officials and high-ranking law-enforcement officials”. Venediktova was away, for literally one day, namely 20 December, with the document regarding Poroshenko signed by one of her deputies, Oleksiy Symonenko. This was immediately noted by Poroshenko’s lawyers, especially given the lack of any need to make the announcement that day when Poroshenko was outside the country.   The document was also signed after the particularly public statement and even video from SBI on 17 December about their unsuccessful attempt to hand Poroshenko a summons for interrogation.  On 20 December, one of Poroshenko’s lawyers, Ilya Novikov commented that the attempt to present his client with a summons as he was preparing to leave the country was aimed at creating the impression that Poroshenko had something to fear from the interrogation and was planning to go into hiding.  It is hard not to see the same aim in the SBI’s assertion on 6 January that Poroshenko was “most probably” not going on a scheduled trip.  As mentioned, these are by no means the first criminal proceedings brought against Poroshenko since he lost office in 2019, and he has remained a serving MP and the leader of his European Solidarity party.

As noted earlier, there are alarming echoes of the prosecution under President Viktor Yanukovych of his main rival Yulia Tymoshenko.  She was prosecuted and even sentenced to a huge term of imprisonment over a gas agreement with Russia at a time when the latter was already using gas and cuts in gas supplies as a weapon or means of pressure with respect both to Ukraine and to the EU.  As with the accusations against Poroshenko, there seems no suggestion of personal gain.

In his extremely critical assessment of the document produced and the charges they suggest against the former President, KHPG Director Yevhen Zakharov points out that in the case of state treason, intention to undermine the territorial integrity, sovereignty, etc. of Ukraine, must be proven.  There is no such thing as treason by negligence.   The document only claims that Poroshenko was guided by political interests (fearing loss of popularity in the event of a further escalation in the situation with the aggressor state).

Intention is also required to substantiate the claim that the former President was abetting the activities of terrorist organizations.  Just arguing that providing them with money for coal is not enough, especially given that it was winter and government-controlled Ukraine needed to heat itself.

Zakharov notes that there were criminal proceedings in 2014/15 over the quality of the South African coal with some investigative assessments carried out which appeared to substantiate the concerns.  Simply alleging that these assessments were forged or of substandard quality is not enough when no evidence of this has been provided, nor of criminal proceedings against those responsible.

The other issue, Zakharov says, is that Zelensky has, since his election campaign spoken openly, or indirectly, about the supposed need to imprison Poroshenko. He views this as a clear indication of political motivation.

Ukraine’s international standing plummeting during the Yanukovych years, in no small measure due to the politically motivated ‘trials’ of Tymoshenko; former Interior Minister Yury Lutsenko and at least one other member of Tymoshenko’s government.  There were media reports on 24 December 2021, stating that the Prosecutor General’s Office had agreed to apply for the former President to be remanded in custody, although there was nothing on the official website to confirm this.  On 4 January, in the second of two reports about Poroshenko, the State Bureau of Investigations refuted media reports that SBI investigators had withdrawn an application to the Pechersky District Court for Poroshenko’s arrest.  This provided yet another opportunity to mention the charges against Poroshenko, but gave no specific information as to when an application for his arrest is to be anticipated.  Poroshenko’s party colleagues announced on 6 January that he will be returning on 17 January.