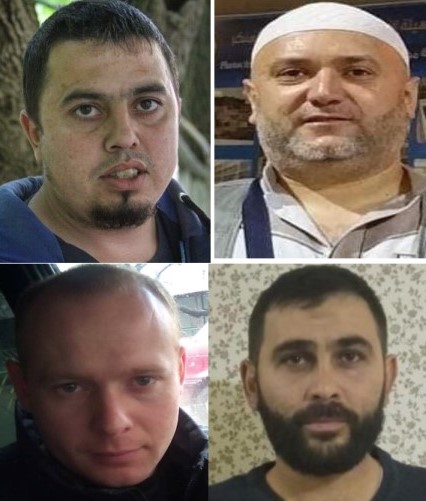 Four Crimean Tatar civic activists were arrested on 9 February, with nine children seeing their fathers taken away by the armed and masked men who burst into their homes at 4 a.m.  All of the men have earlier faced harassment for their civic position, with Ernest Seitosmanov, brother of political prisoner Enver Seitosmanov, quite recently the victim of an effective FSB abduction.

The armed searches began early in different parts of Crimea and appear to have been very brief in all cases, with it long having been the case that the FSB, Russian Guard and other officers are interested only in so-called ‘prohibited literature’ and, very often, claim to have found what they brought with them.  This is one of the reasons why independent lawyers are invariably prevented from being present.  By early evening, Russian occupation ‘courts’ in Simferopol and Sevastopol had, without any justification, remanded in custody: Ametkan Abdulvapov; Marlen Mustafayev; Ansar Osmanov and Ernest Seitosmanov, with the latter two seemingly to face charges together.

Ansar Osmanov is from the village of Tankove in the Bakhchysarai district   His lawyer, Emil Kurbedinov, says that Osmanov understands the situation perfectly, namely that yesterday he attended politically-motivated court hearings, and today they have come for him also.  This has indeed become a pattern under Russian occupation.  Osmanov took part in civic initiatives and information campaigns in defence of political prisoners, and travelled to Rostov in Russia where Russia’s ‘trials’ of Crimean Tatars and other Ukrainians are almost always held.  He was, in fact, detained once, in October 2019, together with civic journalist Amet Suleimanov (who is also now a political prisoner) and civic activist Ali Kerimov , as they were returning from the trial of human rights activist Emir-Usein Kuku and five other Amnesty International prisoners of conscience from the Yalta region.

Kurbedinov is quite clear that the enforcement bodies are not targeting terrorists, but Crimean Tatars who take a civic stand.  He says that he used to see Osmanov at almost all politically-motivated court hearings.

Kurbedinov would almost certainly not have been allowed into the home during the ‘search’ anyway, but the FSB also resorted to a new method and had his mobile telephone disconnected.  They also shut Osmanov’s wife and five children away in the kitchen, however Meryem Osmanova told Crimean Solidarity that her daughter managed to see one of the men planting two books under the mattress in the children’s room where they began their ‘search’.

It should be stressed that the ‘prohibited books’ in question are of a religious nature, and this is not the first time that the FSB have pretended to find them in places that no devout Muslim would think of placing religious material.

The armed ‘search’ on 9 February 2022 was the fourth that Ernest Seitosmanov was subjected to since the first, in 2015 and the second, when they came for his brother, Enver Seitosmanov.  There was a third, very ominous, raid on 28 April 2021 when Ernest was taken away by the FSB. He was only released late in the evening and only after he agreed to sign an undertaking not to reveal what the interrogation, carried out without a lawyer, was about.

Ernest Seitosmanov also visited political trials, both in occupied Crimea and in Rostov; took part in various civic initiatives; and helped the families of political prisoners.  He was one of very many men and women detained on 23 November 2021 when they tried to welcome lawyer Edem Semedlyaev who was due to be released after 12 days in prison for doing his job.  Seitosmanov was sentenced to 13 days in jail merely for trying to greet Semedlyaev outside the jail.

Seven years after the FSB first carried out an armed search of Ernest Seitosmanov’s home and did not prosecute him, it has decided to use its conveyor belt ‘Hizb ut-Tahrir charges against both Seitosmanov and Osmanov.  During this ‘search’ also, the FSB claimed to have found two books which are presumably on the list of ‘prohibited literature’.  The absurdity of this cannot be overstated considering that this was the FSB’s fourth such visitation.  Hizb ut-Tahrir  is a peaceful transnational political and religious Muslim organization which is legal in Ukraine and most countries. The Russian Supreme Court has never given any adequate explanation for its 2003 decision to make Russia the only country in the world to have declared Hizb ut-Tahrir ‘terrorist’.  The ruling was effectively passed in secret, and the renowned Russian Memorial Human Rights Centre believes that the real motive may have been to facilitate extradition of members of Hizb ut-Tahrir to Uzbekistan where they faced religious persecution.  Since early 2015, Russia has been using such charges in occupied Crimea, with these prosecutions increasingly used as a weapon against Crimean Tatar civic journalists and activists.

The claim now is that both Osmanov and Seitosmanov ‘organized a Hizb ut-Tahrir cell’ in Sevastopol, with this charge, under Article 205.5 § 1 of Russia’s criminal code, carrying a sentence of up to life imprisonment.

No actual crime is required, and the ‘proof’ that the men had any connection with Hizb ut-Tahrir  is likely to be provided by ‘secret witnesses’ who may well have never met the men.

Marlen Mustafayev, who has two children, supported his family by working as a car mechanic, while also actively attending political trials and helping the families of political prisoners.  He was one of around 100 Crimean Tatars prosecuted and fined in December 2017 following peaceful single-person pickets in support of political prisoners in October that year.

The prosecution is claiming here too that he ‘organized a Hizb ut-Tahrir cell’, with the FSB almost certainly planning to save themselves any work by simply copy-pasting the falsified ‘evidence’ already used to convict Riza Omerov (and his father Enver Omerov) and Aider Dzhapparov, as well as in the ‘trial’ now underway of Azamat Eyupov

Details about Ametkan Abdulvapov are, for the moment, sketchy.  The father of two is, however, known to be facing charges of ‘involvement’ in a Hizb ut-Tahrir  group (Article 205.5 § 2).

These ‘Hizb ut-Tahrir  prosecutions’ serve as a weapon particularly against civic activists and journalists, but are also part of Russia’s ongoing intimidation and persecution of Crimean Tatars in general.  The FSB are also known to get promotions or bonuses for such cases which they use for ‘good statistics on fighting terrorism’, without the need to actively do anything but fabricate criminal cases against men who have committed no crimes.