Invaders stage fake referendum so they can accuse Ukraine of ‘invading Russia’ Russia confirms plans to annex occupied parts of Zaporizhzhia and Kherson oblastsRussia threatens deportation from Kherson & Zaporizhzhia oblasts for pro-Ukraine views and for ‘discrediting’ the invaders Russia instals FSB man, other Russians to ‘govern’ occupied Kherson where the population hates themMayor of Kherson abducted after refusing to collaborate with Russian invaders Russian invaders torture abducted Kherson patriot into ‘confessing’ to surreal ‘abduction plot’ Tortured to death by Russia's FSB for helping to defend Ukraine from the invadersTeachers in occupied Kherson refuse to collaborate with Russian occupiers Russia uses terror and abduction in attempt to force schools to collaborate in occupied Melitopol Mayor of Melitopol Ivan Fedorov abducted after refusing to collaborate with the Russian invaders Russian priest arrested and prosecuted for sermon opposing Russia’s war against Ukraine Russia effectively admits it deliberately bombed the maternity hospital in Mariupol that killed three patients, including a childRussia brings grotesque propaganda to Berdiansk after Ukrainian journalists refuse to collaborate Russian invaders murder Ukrainian volunteers Impassioned appeal from Ukrainian Muslim leader in face of Russia’s war to destroy Ukraine Russia is forcing Ukrainians from occupied Crimea and Donbas to fight in its invasion of Ukraine Children among the dead after Russian invaders opened fire on fleeing civilians Russia installs its propaganda TV after seizing Kherson and imposes 15-year sentences for reporting its invasion of UkraineUkrainian survivors of the Holocaust demand Putin and Russia get out of Ukraine Russia continues its carnage, flouting binding order from ECHR to stop bombing civilians in Ukraine
• Topics / War crimes 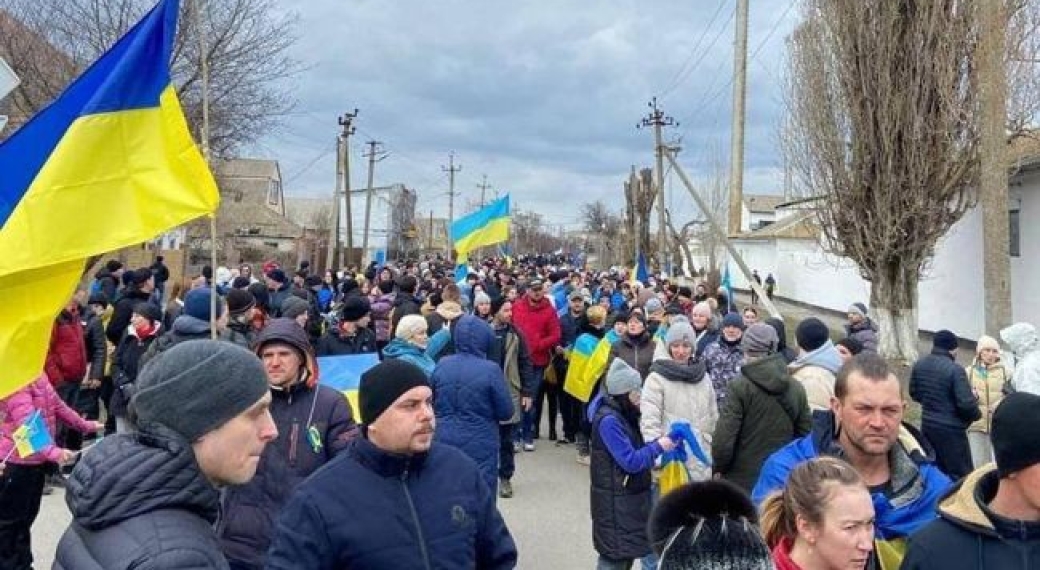 Melitopol residents protesting against the Russian invaders’ abduction of their Mayor, Ivan Fedorov Screenshot from a video posted of the protest

The Russian-installed ‘head’ of the occupied parts of the Zaporizhzhia oblast formally announced on 8 August preparations for a so-called ‘referendum on joining the Russian Federation’.  Since Edward Balitsky had already issued a ‘decree’ on forming ‘election commissions for a referendum’ s two weeks earlier, the announcement was scarcely newsworthy, and seemed aimed at creating a propaganda event presenting such a ‘referendum’ as “the initiative of the people”.  The only hiccup, however, was that the 700 people needed to be bused in to occupied Melitopol  as the vast majority of local residents want nothing to do with this farce.

Balitsky was at a so-called forum in Melitopol  under the title “We are together with Russia’.  The videoed stunt was shown on Russian television with it claimed that the “participants in the forum voted unanimously” for the proposal to hold a ‘referendum’.  There was nothing to suggest that votes had actually been counted. 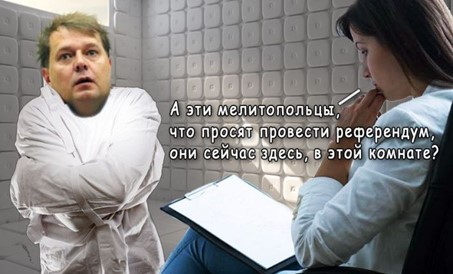 RIA Melitopol’s cartoon in which Balitsky is in a straitjacket with the psychiatrist asking ’And these Melitopol residents who asked you to hold a referendum, are they here, in this room, now?

Ivan Fedorov, the democratically elected Mayor of Melitopol , also saw the ‘announcement’ as an attempt to create propaganda for Moscow and for Balitsky to thus please his new paymasters.  Fedorov comments that the invaders’ “plans for a pseudo-referendum are on the brink of collapse – even at machine gunpoint, no more than 10% of Melitopol residents support russia.”

In order to imitate ‘mass support’, Fedorov said, and stage their ‘forum’ at the Palace of Sport, collaborator Balitsky and the Russian invaders who installed him bused in people from other occupied parts of the Zaporizhzhia oblast.  Fedorov points out that Balitsky’s attempt, without Russian weapons, to get himself elected was an abysmal failure, with him receiving less than 10% of the votes.  He calls him a “mentally ill would-be-king” who has thought up a title for himself.  Fedorov is doubtless correct about Balitsky, but it must be said that Russia uses this type of individual everywhere.  Sergei Aksyonov, the pro-Russian politician with a criminal background, whom the Russians installed after invading Crimea had an even smaller percentage of the votes.   Vitaliy Yefymenko, one of the Russian-installed collaborators in the Kherson oblast who has not (yet) been killed or gravely injured by Ukrainian partisans, was arrested in 2013 for armed robbery.

Russia has clearly been planning to stage a ‘referendum’, either on creating another so-called ‘people’s republic’ or on ‘joining the Russian Federation’ since it seized around two-thirds of the Zaporizhzhia oblast, although not Zaporizhzhia itself.

Russia is clearly assuming that it can pull off the same ‘referendum stunt’ and speedy annexation as it did with Crimea in February – March 2014.  Soon after the pseudo-referendum was announced, Oleg Morozov, a Russian State Duma deputy from the ruling United Russia party said that the process of what he called ‘joining the Russian Federation’ could take just a few days.   The Crimean ‘referendum’ which did not have an option for retaining the status quo within Ukraine, was staged on 16 March, with formal annexation a mere two days later.

Ukraine’s President Volodymyr Zelensky has already stated clearly that the holding of such ‘referendums’ will remove any possibility of peace negotiations with Russia.  It is important that western countries react strongly, both with sanctions and by increasing military supplies to Ukraine.  Such referendums should, after all, leave nobody in any doubt as to the dangers to Ukraine and to other countries neighbouring Russia if the latter does not sustain decisive defeat against Ukraine’s Armed Forces.

On 7 August, the Kherson Regional Administration reported that the Russian occupiers have been trying to bribe people to take part in the fake referendum there, with people offered ten thousand roubles in ‘aid’.  It is near certain that the same methods will be used in occupied parts of the Zaporizhzhia oblast.

As reported earlier, the ruling United Russia party has been setting up fake ‘help centres’ in parts of Ukraine seized by the Russian army in order to trick residents into providing personal data.  Such data is essentially all that is required to rig the ‘required’ result, with nobody in any doubt that the percentage of those alleged to have ‘voted to join Russia’ will be fixed in Moscow and have absolutely nothing to do with what happens on the ground on occupied territory.