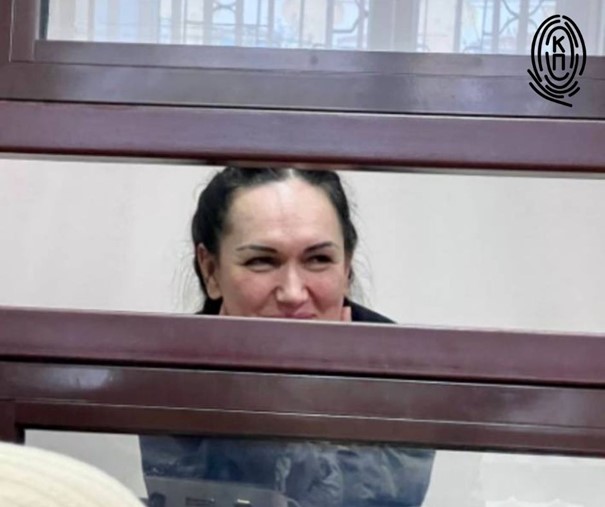 A Russian-controlled ‘court’ in occupied Crimea has ignored flagrant falsification of charges brought against Iryna Danilovych, and sentenced the 43-year-old civic journalist, nurse and human rights defender to seven years’ imprisonment.  This was a brazen act of reprisal against Iryna for her courage and a chilling message to others of what they should expect if they too speak out.

‘Prosecutor’ Dmitry Lyashchenko (together with Yulia Matvyeya) had demanded the extraordinarily harsh seven-year sentence (and 60-thousand rouble fine) over ‘explosives’ purportedly found in Danilovych’s glasses case a full week after she was abducted and imprisoned by the FSB.

Judge’ Natalia Kulinskaya from the Feodosia municipal ‘court’, clearly understood the absurdity of the charge as, in the verdict handed down on 28 December, the part in the indictment about obtaining the explosive was excluded.  This, however, left only the entirely inexplicable carrying of the alleged explosives by a nurse on her way home from a night shift, and makes the 7-year sentence (and 50-thousand rouble fine) evidently excessive.  The sentence (in a medium security prison colony) is counted from the actual day of Danilovych’s abduction, with Kulinskaya choosing to ignore the clearly forged and backdated protocols of arrest, the absurdity of the FSB’s version of events and evidence to corroborate Danilovych’s account.

Iryna Danilovych is a nurse, human rights defender and civic journalist who regularly wrote for INzhir Media and the Crimean Process human rights initiative.  She also headed the Crimean branch of the Alliance of Doctors trade union and had taken part in attempts to obtain the promised, yet never provided, pandemic-linked supplementary payments for medical workers. Despite understanding that she was likely to face reprisals, she spoke publicly about the lies that the occupation authorities were telling about the real number of covid patients.

Iryna’s human rights activism made her acutely aware of the abductions and enforced disappearances that Russia has brought to occupied Crimea, as well as of the ever-mounting number of politically motivated trials.  During her last address to the ‘court’ on 27 December, she explained that in the first hours of her abduction, she had been sure that she was to become the latest victim of such enforced disappearances.  That, in fact, was widely feared, however her abduction attracted considerable attention and the FSB eventually chose a different route.  Having held and tortured and threatened her for a week, trying to break her into ‘confessing’ to  non-existent contacts with foreign organizations and ‘state treason’, but finding only “the truth and my opinions”, they decided to claim to have ‘found’ explosives in her glasses case (under Article 222.1 § 1 of Russia’s criminal code).

As the sentence passed by Kulinskaya has shown, the FSB officers involved (Yury Chevalkov; Oleg Savchenko; Sergei Suvorov; and Ruslan Narimanov) were right in assuming that shoddily falsified ‘evidence’ would be sufficient.

During the first ‘court hearing’, Danilovych stated that she had not been arrested on 29 April, but abducted.  She had only been charged with possession of an explosive a full week after her seizure and after numerous interrogations regarding supposed contacts with foreign organizations.  It was only on 7 May that she was officially detained, although she had been held in the basement of the Russian FSB offices since 29 April. It was a further five days before her lawyer, Aider Azamatov, received confirmation that she was imprisoned in the Simferopol SIZO [remand prison].

There is ample evidence of this, as well as of the lies told to her lawyer and parents during the period when she was held incommunicado. Danilovych also pointed to the numerous oddities in the material against her. If, as now claimed, her detention and, now sentence, were over the alleged explosives in her glasses case, why was an entire volume of the material devoted to her interviews to the media?

Plausibility was also not required.  The FSB claimed in ‘court’ that Danilovych had  ‘voluntarily’ remained in their basement, and was perfectly ‘comfortable’ in near-hotel conditions   Danilovych’s blunt refutation of such nonsense was backed by the video footage of her abduction, the fact that she was prevented from seeing a lawyer or even telling her parents where she was.  Yet an ‘investigator’ (identified only as Timofeyev) from the Russian ‘military investigative committee’’ said that he had found no infringements in the FSB’s treatment of Danilovych.

The Russian FSB have eight years’ experience of near total impunity in occupied Crimea, and have clearly understood that no level of shoddiness will be deemed too excessive. They first planted a grenade in the car of Crimean Realities journalist Vladislav Yesypenko, with even the fact that the explosive did not fit in the place they claimed to have found it powerless to prevent a predetermined political sentence. The abduction and persecution of Iryna Danilovych was, if anything, even more flagrantly falsified.  The sentence will, of course, be appealed, however there are, unfortunately, no grounds for expecting justice from any ‘court’ while Crimea remains under Russian occupation.