Russian-Occupied Crimea: Memorial Plaque and Glorification of StalinDramatic increase in number of Russians who justify StalinStalin Museum: Putin’s Russia Immortalizes Bloody DictatorAnger and Protest over Stalin Monument in YaltaPortrait of Stalin appears in Russian-occupied CrimeaStalingrad as latest step in re-glorification of tyrantNeo-Nazis in Moscow’s ServicePro-Russian separatists start their own anti-Semitic TV channelPro-Russian, anti-Roma, anti-Semitic and hunting out Ukrainian speakersThe Donetsk anti-Semitic leaflets – what should not be overlookedEast Ukraine crisis and the ’fascist’ matrixRussia continues its false narrative as defender of oppressed minorities in UkraineRussian propaganda claims Jewish organizations supporting Maidan are bringing on "second Holocaust"The Crimean referendum’s neo-Nazi observersPutin’s Neo-Nazi HelpersChief Rabbi and others dismiss Putin’s “anti-Semitic extremist” claimsRussian propaganda must be challengedWestern Media: Don’t distort the situation in Ukraine!Russia’s aggression poses dangers beyond Ukraine’s bordersCrimea: Anti-Semitic card and other provocation in time of siege
• Topics / Victims of political repression 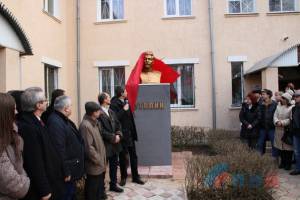 The Luhansk Information Centre, the official news agency of the so-called ‘Luhansk people’s republic’ [‘LNR’] reports that a monument to Stalin was unveiled on Dec 18 by “guests from Russia and LNR public figures”.

Stalin, whose crimes included Holodomor, or the manmade Famine of 1932-33, the Deportation of the Crimean Tatar People in 1944 and the Terror of 1937-38, is described as “the prominent state and political figure and leader of the Soviet Union during the years of the Great Patriotic War”.

The bust to the dictator has been erected in the courtyard of the office of the ‘Union of Communists of the Luhansk oblast’ in Luhansk, and the delegation from Russia was made up of communists.

Kazbek Taisayev, a member of the delegation, called the bust to Stalin “a tribute to the great country" that they would build together, with all united in a "great union of brotherly peoples, where there will be Russians, Ukrainians, Belarusians and all 200 nationalities that inhabited our great country, USSR”.

Oleg Popov, leader of the local communists, had even more to say.  “At the present time the ideology, symbol, personality of Stalin is important not only for the Luhansk oblast, but for the entire world since once again Nazism is on the rise, and for victory over it we need the harsh, strong hand of the leader”.   Stalin, he claims, should serve as an example of creation and restoration against the destruction reigning in Ukraine”.

While ostensibly a communist initiative, the monument is part of a mounting trend both in Russia, and in areas under its occupation or the control of Kremlin proxies, i.e. the two so-called ‘republics’.

Moscow-based BBC correspondent Steve Rosenberg recently reported a ‘Stalin 2016 calendar’, focusing not on his crimes, but on the (inaccurate) myth about him as the leader who enabled the Soviet Union to defeat the Nazis.

In July this year a Stalin museum and large monument were opened in the village of Khoroshevo (Tver oblast, Russia) where Stalin stayed one night in August 1943 on his way to an area within safe distance from the front.

The proposal to create the museum came from the Russian Military History Society, a body created by Russian President Vladimir Putin in Dec 2012, in order to “consolidate the forces of state and society in the study of Russia’s military-historical past and counter efforts to distort it”.  It is headed by Russia’s Minister of Culture Vladimir Medinsky.

Medinsky marked the opening of the museum with an article in Izvestia entitled: “We must stop laying all our problems on Stalin”.  In it he wrote that he wanted to avoid both “accusations” and “justifications”, and proposed a different approach to “the history of our country”.  There is our historical age, he claimed, in which “there is a great people and great deed. And there is Stalin. They – it turned out that way – are not separate one from the other, not “thanks to” and not “despite”. Everything together and nothing removed – that is our history”.

It is a history with some carefully maintained gaps.  Russia under Vladimir Putin and an ever-more powerful FSB [security service] has put the archives of all the secret police bodies (Cheka, NKVD, KGB, etc.) under lock and key for another 30 years.

With the victims seldom mentioned, and their persecutors conveniently hidden as ‘top secret’, it is hardly surprising that there has been a dramatic increase in the number of Russians who are willing to justify the mass murderer who liked to witness his personal enemies being tortured.

There has also been an increase in the number of statues, billboards, etc. with Stalin on them.  This was purportedly around the 70th anniversary of victory over Nazi Germany, but long predated those celebrations and is continuing.

There was outrage from Crimean Tatars in particular at the beginning of 2015 when a statue was erected in Yalta, Crimea, to Stalin, together with Winston Churchill and Franklin D. Roosevelt.   A plaque to the dictator has also been erected, and his image is quite often seen at various public events.