Why are Putin’s Enemies held in Ukrainian Prisons? 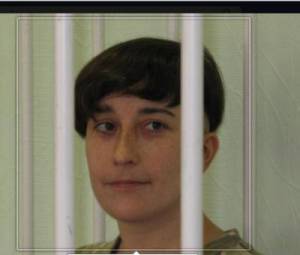 Three Russian nationals have been in Ukrainian detention since early December 2015, with courts accepting that they could flee to Russia if released.  Each, however, would face persecution in their country of origin, not least because of their active support for Ukraine’s struggle against Russian aggression.

If Ukraine’s SBU [Security Service] seriously has evidence that Olga Sheveleva, Anastasia Leonova and Pavel Pyatakov were working for Russia’s FSB, they have yet to reveal it.  The situation is especially shocking given that Sheveleva’s version of events, that she and Pyatakov were brought to Kyiv by Ukraine’s Military Intelligence Service [HUR] has been confirmed by the latter.

On April 18, the Kyiv Court of Appeal refused to release Olga Sheveleva from custody.  The judge had only two questions: how she had come to Ukraine and whether she had known Oleh Muzhchil.  Since she had crossed the border into Ukraine illegally, it was presumably assumed that she could choose the same route back to Russia.  Neither prosecutor nor judge saw the need to consider why she would return to certain imprisonment as a person who has not only opposed the regime in Russia, but who defended Ukraine in the Kremlin-backed conflict in Donbas as part of an organization (Right Sector) which is banned in Russia.

The second question is crucial, since all three Russians are in detention essentially because they knew Oleh Muzhchil. The 50-year-old Ukrainian from Donetsk was killed in a shootout with SBU Alpha officers in Kyiv on Dec 9, 2015.  During the night from 9-10 Dec. all three Russians and three Ukrainians were arrested, in Kyiv or in Kharkiv.

There are certainly grounds for assuming that Muzhchil and one other Ukrainian were planning something illegal, with a considerable arsenal of weapons and explosives found in Muzhchil’s flat in Kyiv, and the flat of  Vsevolod Vishnevetsky in Kharkiv.  There was nothing at all in Leonova’s flat, or that in the flat of a Ukrainian couple, who may have also been dragged in only because the husband was Muzhchil’s former student (of Buddhism).  The SBU, accompanied by a sniffer dog, initially found only a couple of bullets in the flat occupied by Sheveleva and Pyatakov.  Two days after this official search, two grenades were ‘found’ behind a gas cooker.   There were no fingerprints, and the fact that the dog did not detect them the first time around arouses suspicion that they were planted.

Muzhchil had had been a committed leader of a far-right Ukrainian nationalist movement since the 1990s, and was involved in Euromaidan as a member of the radical Right Sector (more details here).  All indications are that he was becoming more radical in his opposition to the post-Maidan government in Ukraine which he considered to be controlled by oligarchs.  In May 2015, for example, under the pseudonym Serhiy Amirov, he wrote that “Ukrainian patriots should bring the war to the homes of all deputies, ministers, generals, oligarchs, the President so that all state figures get a real taste of what ‘war’ is.  Only this will knock out the wish to make money and a career on the blood of Ukraine’s finest sons, and learn to call the enemy the ‘enemy’, and the war ‘war’.  And only then, when against the rivers of blood of fallen patriots flowing from the front, the same rivers of blood will flow of state traitors and plunderers, will we be able to free Ukraine of the foreign and internal occupation”

Yet the SBU claims that this well-known Ukrainian nationalist was working for Russia.  It has thus far provided evidence only that weapons and explosives were being amassed. 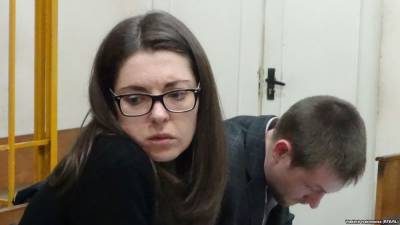 Russians as ‘evidence’ of a ‘Russian link’?

As reported already, there seems to be nothing indicating that 33-year-old Anastasia Leonova was linked with either Muzhchil or the others.

Almost all information available about Sheveleva comes from Olena Bilozerska, a well-known blogger and committed Ukrainian nationalist, who has taken part in the military conflict in Donbas as part of the Right Sector Volunteer Corps. She is convinced that Sheveleva is “100% a political prisoner”.  The same almost certainly applies to Pyatakov.

Bilozerska believes it likely that Sheveleva was influenced by the charismatic Muzhchil.  She hated the regime in Russia under Vladimir Putin and had pronounced pro-Ukrainian views which Bilozerska suggests were prompted by the principle that “the enemy of my enemy is my friend”.

Sheveleva’s lawyer Serhiy Tymoshchuk says that the charges against his client are totally vague.  She is accused of taking part in a terrorist group headed by Muzhchil and of planning a terrorist attack, but there is no information about when, where, how, etc.

Sheveleva has consistently dismissed all allegations of involvement in terrorism and denies the investigators’ version that Muzhchil brought her and Pyatakov to Kyiv and rented them a flat, so that they could get ready for the purported terrorist acts.

Yes, she and Pyatakov were indeed part of a special purpose unit called “Bazalt”, and yes, this was headed by Muzhchil, however the unit was a military intelligence group under Ukraine’s Military Intelligence HUR.

This, it should be stressed, has been backed by HUR officers themselves.  The defence managed to get them summoned and they confirmed that Sheveleva was telling the truth.  They say that they had acted this way in order to watch the group and determine whether they could cooperate with it.

Judging by the weapons, two people appear to have been planning something – one Ukrainian in Kharkiv and Muzhchil.  The SBU has made public statements about Russian links, etc., but has provided absolutely no evidence to back their assertion that the men were working for the FSB.

There are no clear charges against the three Russians, and neither they nor their lawyers have been shown any evidence to back the charges.

Sheveleva’s lawyer has, however, obtained confirmation of his client’s assertion of ill-treatment during the arrest.  A medical examination found 2 broken ribs and her lawyer is preparing a report on this clear offence.

Three Russians have been in Ukrainian detention now for well over 4 months on nebulous charges which thus far bear no scrutiny.  It would be a grave violation of their rights if the SBU was depriving them of their liberty without any grounds other than their nationality.