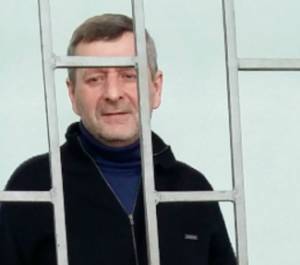 Russian pro-Kremlin channels have been in overdrive since Jamala’s victory for Ukraine in Eurovision, however their lies, including the claim that her song remembering the genocidal Deportation of 1944 was about people “leaving for a better life”, began much earlier.  The gutter-level campaign to undermine her message and her victory was probably to be expected.  Russia has a lot to conceal, and not first and foremost about the Deportation, but about its repression and terror against the Crimean Tatar people now.

Imprisoned Crimean Tatar leader Akhtem Chiygoz earlier welcomed Jamala’s participation in the competition, saying that “the world will hear our pain”.  Let’s hope that the world will, and that they begin directly addressing the repression, including the insane trial against Chiygoz and other Crimean Tatars.

Concern has recently been expressed that Chiygoz, who is the Deputy Head of the Crimean Mejlis [representative assembly] could face further charges following Russia’s banning of the Mejlis.  This would be legal nihilism at its worst, but so too are the charges under which Chiygoz, Mustafa Degermendzhy and Ali Asanov have been in detention for over a year.

The arrest on May 12 of Ilmi Umerov, another top official of the Mejlis, on ‘extremism’ charges have only exacerbated such fears.  Vissarion Aseyev from the Crimean Human Rights Group, had predicted that “the ban of the Mejlis would provide the de facto authorities with a basis for a new wave of administrative and criminal prosecutions of Crimeans, and Crimean Tatars in the first instance”.   This has now happened with Umerov accused of - wait for it - “public calls to action encroaching on Russia’s territorial integrity”, through statements opposing Russia’s annexation of Crimea.

Aseyev believes that the court ruling declaring the Mejlis ‘extremist’ may be used to add ‘extremism’ charges to those the men are already facing.   This would mean, for example, that Chiygoz would also be accused of ‘organizing an extremist society’ under Article 282.1 § of Russia’s Criminal Code, with this carrying a sentence of up to 8 years’ imprisonment.  Five other men: Ali Asanov; Mustafa Degermendzhy; Eskender Emirovaliev; Eskender Kantemirov and Arsen Yunusov could face up to 4 years for ‘taking part in an extremist organization’.  Similar predictions were made recently by Nikolai Polozov, the lawyer representing Chiygoz.  Both were speaking before the adoption in its first reading of a terrifyingly repressive package of laws in Russia which would increase all such sentences.

The criminalization of the Crimean Tatar Mejlis has so far resulted in protest from all democratic countries but no threats of further sanctions.  This is presumably what Russia expected, as it might from the reaction to the criminal charges against Chiygoz and the others.

A recent UNHHR monitoring mission report confined itself to recommending only that the de facto authorities and Russia “ensure due process and fair trial rights for Crimean Tatars detained in relation to the February 2014 demonstration”.

The Council of Europe’s report by Ambassador Gérard Stoudmann was released the same day that the de facto prosecutor announced that she was ‘suspending’ the Mejlis without a court ruling.  The report mentions only that they visited Chiygoz at his request, and that Chiygoz “questioned the lawfulness of his arrest”.

There are undoubtedly cases where it is appropriate to await a court ruling before offering any comment.  This is categorically not one of them, as the authors of the reports must have been aware.

They mention, after all, that the men are charged over alleged ‘mass disturbances’ on Feb 26, 2014, yet do not point out that this makes any prosecution illegal under Russia’s own legislation.  Chiygoz and the other Ukrainian nationals are charged under Russian legislation over a pre-annexation demonstration in Ukrainian Crimea over which Russia has no jurisdiction.

The reasons for questioning the lawfulness of Russia’s actions over this case are legion, and are not ignored by the Russian Memorial Human Rights Centre.  In their statement on Feb 15, 2016, they point to the clear lack of jurisdiction and dismiss the formal excuse presented that two of the alleged ‘victims’ are Russian nationals.  Neither sought medical treatment at the time, and Memorial says that in their case, as in those of over half the ‘victims’, there are doubts over whether the alleged injuries were genuinely sustained.  Memorial specifically notes that the political motivation is demonstrated by the fact that only Crimean Tatars have been targeted.

This prosecution is already a record-breaker in lawlessness.  Novaya Gazeta reported in late February 2015, a month after Chiygoz’s arrest, that the Russian Investigative Committee had been short of ‘victims’ and witnesses, and on February 2, 4 days after Chiygoz’s arrest and 11 months after the events, invited Simferopol residents to come forward “even in the absence of bodily injuries”.

If new charges are brought against the men, it can only be by backdating over two years a court ruling issued in April 2016.  Western countries need to come up with more than surreal demands that the men “receive a fair trial”?