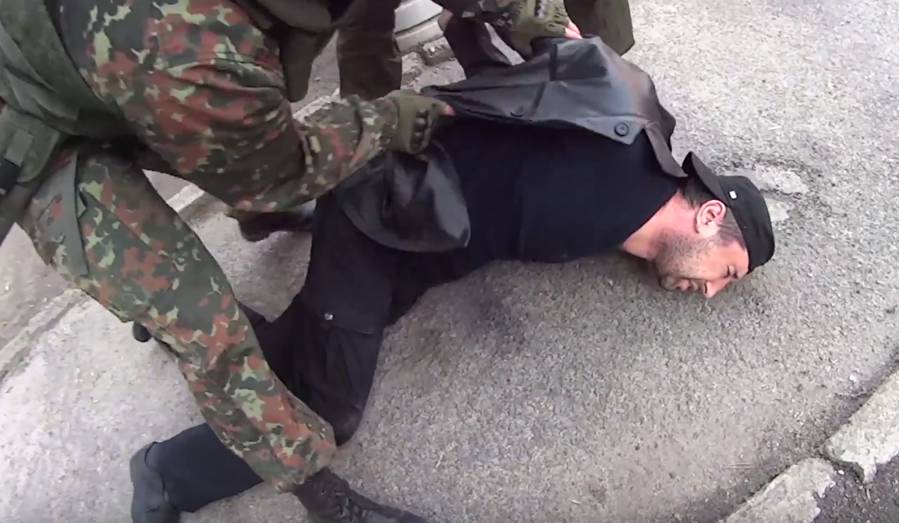 A day after Russia’s FSB produced a video of a Ukrainian ‘confessing’ to his part in an SBU plot to commit acts of sabotage in Crimea, Donbas and Russia, Kremlin-backed militants have come up with their own videoed arrest.  The alleged saboteur is seen supposedly being seized in the middle of summer wearing a jersey, leather jacket and cap pointing the wrong way, not to mention boots without laces.

The staged capture is absurdly inept, but not so very funny as Oleh Suherey, the Ukrainian seized in Donbas was almost certainly subjected to torture to extract the confession.  The same is likely with the FSB’s latest victim in occupied Crimea – Hennady Lymeshko.

The so-called ‘ministry of state security’ of the self-proclaimed ‘Donetsk people’s republic’[DPR] asserted on August 16 that they had detained a Ukrainian military serviceman and a group of people whom they accuse of planning acts of sabotage.  41-year-old Oleh Suherey is from Kharkiv originally and is claimed to have been in a special operations regiment of Ukraine’s military intelligence [HUR].

He and an unspecified number of others were supposedly planning to blow up a television tower in Donetsk, on instructions from Ukraine’s SBU [Security Service].

It is asserted that Suherey came to Donetsk from Mariupol on false documents and rented a flat where he kept explosives and weapons – as well as the entirely unseasonable clothes that would have made him stand out  immediately.  If, of course, he had been detained when this was reported, which is clearly unlikely.

The SBU have dismissed the allegations and clearly see a link with the arrest in occupied Crimea of Hennady Lymeshko.

“The first time it sounds like a tragedy, the second – a farce.  Yesterday there were SBU officers in Crimea, now in Donetsk’, a spokeswoman commented.

There are two such television towers in Donetsk, and destroying one would not significantly obstruct the flow of pro-Russian and Russian propaganda emitted.  There are partisans in both so-called ‘republics’, who could conceivably try to blow them up, but this would not be on SBU or Ukrainian military instructions.  According to Tetyana Popova, former Deputy Minister of Information Policy, a decision was taken back in 2015 to concentrate on jamming equipment and not try to destroy any such expensive television towers which will one day return to Ukrainian control.

So why is the ‘arrest’ announced only now?

It is possible that Suherey was seized some time back, with this only reported now as the latest attempt to help Russia get Russian contract soldier Viktor Ageyev released in an exchange.  The militants have already tried to have Ageyev added to the list of men whose release they are demanding in exchange for some of the minimum 137 POW and civilian hostages they are holding.  This is probably coordinated in Moscow for whom such captures are proof of the worth of their constant denial of direct involvement in Donbas.  The attempt to have him added to the militants’ list has been rejected by the Ukrainian side.  Russia is holding at very least 44 Ukrainians prisoner in occupied Crimea and Russia.  They are the people who should be freed.

Oleh Kotenko, from the ‘Patriot’ volunteer organization which is involved in trying to free hostages, believes that both ‘arrests’ – that of Lymeshko by the FSB in occupied Crimea and of Suherey in Donetsk – are aimed at presenting Ukraine as unreliable and impossible to reach an negotiated agreement with.

In fact, the stories both the FSB and the Kremlin’s proxies in Donbas come up with seem largely aimed at totally uncritical Russian propaganda media and withstand no scrutiny. This is the reason for the FSB in occupied Crimea preventing imprisoned men from seeing real lawyers and retracting torture-induced ‘confessions’.

There has been a steady stream of such claims of the FSB thwarting terrorist or sabotage plot since the arrest in May 2014 of Ukrainian filmmaker Oleg Sentsov and three other opponents of Russia’s annexation of Crimea.  These are presumably aimed at convincing Crimeans that they are ‘protected’ by Russia and the FSB against dastardly Ukrainians who want to make their lives difficult.  Less logically, it is clearly also aimed as providing an excuse for the ongoing difficulties, the electricity shortages, etc.

See: Russia accuses Ukraine of Trying to Sabotage Crimean Electricity with a Handsaw

Lymeshko’s ‘confession’ and alleged capture (together with the handsaw he was supposed to be using to destroy a huge electricity pylon) were widely shown on Russian television.   This came exactly a year after the FSB’s claims, trumpeted by both the Kremlin and the Russian propaganda media, that Ukrainian had made ‘incursions’ and was planning major acts of sabotage in Crimea.

Two of the four men have already been convicted and jailed on suspect charges that bore little or no resemblance to their televised ‘confessions’ (details here).

That does not get shown on Russian television.