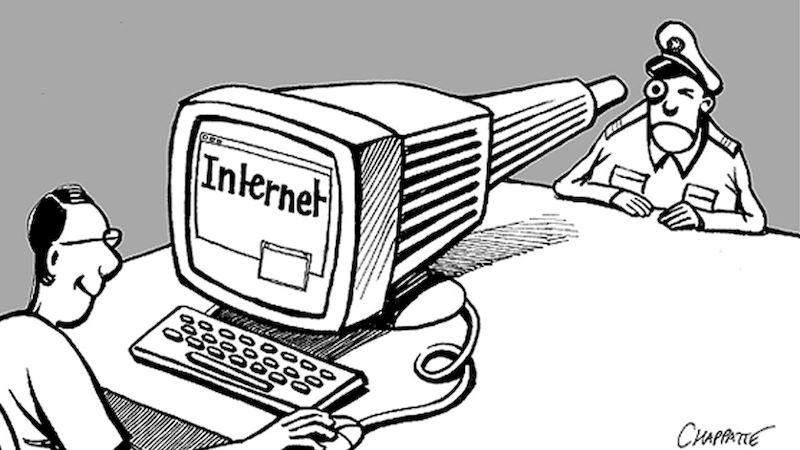 On 20 February, Ukraine’s National Commission for the State Regulation of Communications and Informatization [NCCIR] adopted a draft resolution put forward by the Cabinet of Ministers on blocking banned Russian Internet resources.   This comes a full 9 months after President Petro Poroshenko first announced a ban on Russian-based social media and some other sites.  That highly controversial move failed to provide any details on how providers were supposed to block Internet sites.  The proposals now put forward have alarmed media and rights NGOs, but still leaving it a mystery who is supposed to pay for the control.

The draft resolution envisages that Internet operators should block sites according to their domain names and IP-addresses. According to Oleksandr Fediyenko, Head of the Internet Association of Ukraine, the advantage of this is that providers do not have to be expensive equipment.  The disadvantage, and it is major, is that you can end up blocking several resources at one IP-address, even though only one is banned.  This, he says, would bring Ukraine dangerously close to Russia in being able to block “the entire Internet”.

Even more reminiscent of modern Russia practice would be the proposed special equipment purchased by the SBU to monitor whether providers were indeed blocking the sites.  The State Commission on Communications and SBU would get 3.5 million UAH to install such special means, though which networks they would be installed on is unclear.

15 NGOs, including the Institute for Mass Information and Centre for Civil Liberties, are convinced that it will be possible to use the technical devices purchased to carry out unlawful and uncontrolled surveillance of Ukrainians’ use of the Internet.  They warn that they will also enable manipulation of access to information, through restrictions, bans or even making changes to content, together with other rights infringements.  The lack of any description of such devices can only broaden the scope for abuse.

“Such decisions create the conditions for imposing Russian repressive practice of mass control of the Internet and surveillance of members of the public.  They jeopardize liberty and free development of the Internet in Ukraine”.

The authors of the appeal believe it necessary to jointly seek methods of countering external threats, but note that restriction of access to websites in today’s world is not an effective solution.

As reported, there were conflicting reactions to the President’s Decree of May 15, 2017 which blocked the social media VKontakte, Odnoklassniki as well as Yandex, Mail.ru and other Russian services and TV channels.   This was in implementation of a decision from the National Security and Defence Council from 28 April 2017 on personal economic and other restrictive measures (sanctions) against 468 legal entities

There were some specific difficulties with the measure, such as how the application of sanctions could apply, for example, in the case of Ukrainian citizen Olena Berezovska.  She lives in Moscow and runs ‘Ukraina.ru’, a pro-Russian website created by the Kremlin-funded Russia Today, but how could she be prohibited from entering Ukraine?

There is also the significant hurdle that Internet sites can only legally be banned by court order.

There was a fair amount of support for the measures as well, with many calling the measure overdue, given the virulent propaganda and information warfare tactics since Russia’s invasion of Crimea and military intervention in eastern Ukraine.  It is certainly true that social media like VKontakte are totally under the surveillance of Russia’s FSB, and are frequently used to prosecute and even imprison people in occupied Crimea.

The situation in Crimea, as well as in Russia, is likely to get much worse, with a recent ruling prohibiting Internet providers from divulging information about their collaboration with the FSB.

It is certainly true that the social media banned are teeming with material which is aggressively anti-Ukrainian, as well as groups that are pretending to be pro-Ukrainian, but are in fact administered by Russian citizens for the purpose of manipulating public opinion in Ukraine, discrediting certain groups, etc.

It is also true, however, as investigations into methods used to interfere with the last presidential elections in the USA and with the Brexit referendum in the UK have shown, that non-Russian-based social media, Twitter, etc. can also be used for such manipulative purposes.

As argued earlier, there are major advantages from intelligent monitoring of Russian-based social media, with the pages of Russian soldiers fighting in Ukraine providing important evidence for the International Criminal Court in the Hague.  It is precisely because such material can be incriminating that Russia is now planning to prohibit any soldiers or their families from divulging information about themselves on social media.