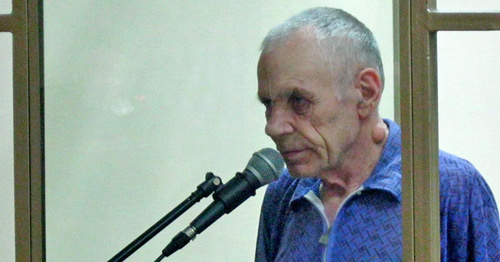 61-year-old Oleksiy Sizonovych from Krasnodon in the Luhansk oblast was, as feared, brutally tortured before ending up sentenced by a  Russian ‘court’ to 12 years’ imprisonment.  Neither the surreal nature of the charges against him, nor the use of torture are, unfortunately anything new, however this case does stand out because of Sizonovych’s age and the fact that he was first seized by Kremlin-backed militants from the self-proclaimed ‘Luhansk people’s republic’ [LPR] before being illegally abducted to Russia where the torture took place.

Diana Ivanova, Ukraine’s consul in Novosybirsk has told Radio Svoboda that she was finally allowed to see Sizonovych in the second half of March, nine months after his blitzkrieg ‘trial’ and sentence for supposedly ‘planning acts of terrorism’.

She says that Sizonovych had not been informed that she was coming and that he had been delighted and relieved when he learned who she was.

He has no particular complaints about the prison colony where he is being held (though might well feel it dangerous to express such criticism), but gave a harrowing account of the torture he was subjected to while held in the Russian city of Rostov on the Don.  He says that he was beaten unconscious twice, and that they applied other forms of torture, including electric shocks.  He was an electrician by trade, and says that the type of shocks used have an effect on the heart, and that he is still suffering from severe headaches as a consequence.

Sizonovych believes that he was not allowed to see the consul in Rostov specifically because his head was all black and swollen after the beatings.

Ivanova has since spoken with Sizonovych’s wife who confirmed that when she saw the trial on television, she could scarcely recognize her husband.  It was clear to her that there was something wrong, and that he was feeling very bad.

While Sizonovych’s assertions of torture are impossible to independently verify, it is not only the terrible headaches and his wife’s testimony that give them weight.  The entire story, and his ‘confession’ are so grotesque that they were described by a local lawyer as like a ‘fantasy novel’.

The same prosecutor - Vladyslav Kuznetsov – was involved in Sizonovych’s case as in the politically motivated trial of Nadiya Savchenko.  In both cases, the Ukrainians were seized by Kremlin-backed militants and handed over to Russia where they were put on ‘trial’.   According to Kuznetsov, “Sizonovych gathered information about forms of transport infrastructure, and, having special knowledge in the explosives field, prepared various types of explosive devices”.

Sizonovych was found guilty of preparing a terrorist act (Article 30 § 1 and Article 205 § 2 of the Russian criminal code) and unlawful possession, purchase, etc. of explosive devices or substances (Article 322 § 1).  He was sentenced not only to 12 years’ imprisonment, but to a prohibitive 250 thousand rouble fine.

The story turns surreal after his capture by the militants.  The frail-looking 61-year-old was supposed to have run away from the militants while they were checking his testimony and “jumped from the river into the Kamenka river”.

Sizonovych’s account of torture makes it clear, should there have been any doubt, why he ‘confessed’ to such an overtly implausible story.  He has now told the consul also that the ‘lawyer’ who was appointed by the investigators did not in any way represent his interests.

There is concern that a lipoma on his neck is beginning to get larger and to worry him.  The prison doctor clearly thinks it needs to be checked out, though nobody seems to be in any hurry to do this.  The consul is hoping to chase this up.

As reported, there was almost certainly pressure put on Sizonovych to withdraw the appeal he lodged against the ruling, and it has now entered into force.