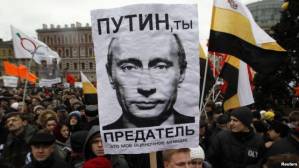 The Russian opposition movement Solidarity has started a series of single-person protests in front of former voting stations in St. Petersburg.

The protesters are demanding the names of those "who stole our votes" in the parliamentary elections held on December 4.

During mass protests in December after the elections, St. Petersburg citizens demanded that the names of the people involved in "stealing our votes" be made public so that "we would know them when we come to ballot stations on March 4 to elect a president."

The first protest was held in front of secondary school No. 261, where polling station No. 577 was located during the December 4 elections.A co-chairman of Solidarity’s branch in St. Petersburg, Iosif Skakovski, held a sign saying "Here they have stolen our votes" in front of the school.

Russian law allows such protests to take place without authorities’ preapproval, which is required for gatherings that include more than one person.

Skakovski told RFE/RL that Solidarity’s observers who monitored the elections in question "were shocked when they saw the protocols officially announced by the election commission as they were completely different from what they saw during the voting."

Solidarity activists plan to hold at least 20 single-person protests in the city. They said they hope other organizations will join them.

The ruling United Russia party officially got some 49 percent of the vote on December 4. Demonstrators in Moscow, St. Petersburg, and several other cities have been protesting those results, saying that the elections were rigged and demanding that new polls be held.