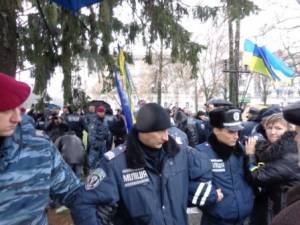 At midday on Monday municipal workers dismantled the tent in Chernihiv’s central square erected by civic organizations protesting against the government’s decision to ditch the EU-Ukraine Association Agreement.

The relevant court order, issued by the Chernihiv Administrative Court, banned the use of “small architectural forms”.  The term covers tents which are crucial for any long-term protest, especially in cold and rainy November.   Virtually every city has sought bans at least on tents in the last week, with the authorities clearly wanting to prevent a repetition of the Orange Revolution when large numbers of peaceful protesters stayed on maidans (squares) around the clock asserting their right to fair presidential elections.

Vysoky Val reports that over 300 people took part in the local Euromaidan on 24 November, and the organizers announced that the demonstration would be ongoing, and called on people to gather on Monday, Nov 25 at 18.00.