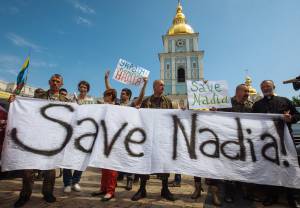 On the 59th day of Nadiya Savchenko’s indefinite hunger strike, prominent Russian writers, actors and others have initiated an appeal on Novaya Gazeta for her release from custody, warning that otherwise she will soon die.

The signatories draw President Vladimir Putin’s attention to the fact that Nadiya Savchenko, a Ukrainian national, has been on indefinite hunger strike since Dec 15 [in fact, since Dec 13] “in protest at her abduction from Ukraine and detention in Russia.  Her health and very life are in danger.  A few days more and she will die”.

This is despite the fact, they stress, that the grounds for the charges against Savchenko have not been proven. “Her defence lawyers have proof that she is not implicated in the death of Russian journalists from mortar shelling near Luhansk.  Savchenko has a cast-iron alibi: she had been taken prisoner by separatists far earlier than when the shelling began. This proof has not been refuted by the investigators who have not yet examined the documents presented by the defence.

On Jan 25, 2015, a second, manifestly absurd, charge was added: Savchenko is now also accused of “illegally crossing the border” although she was taken to Russian territory by force and under convoy”.

They call on Putin to intervene in order to reinstate the constitutional guarantees of human rights in this specific case, and point out that Russian legislation does envisage alternative restraint measures even where the charges involve serious crimes.  There is no reason why Savchenko could not be held under house arrest, they say.

There is, they add, a “great tradition of mercy” in Russia and in memory of German doctor Friedrich Haass -  the ‘holy doctor of Moscow’ who unstintingly devoted all his energy to improving the conditions of prisoners in Russian prisons, ask Putin to demonstrate personal mercy to Nadiya Savchenko.  Her life depends on it.

By late Tuesday morning the appeal had been signed by 5, 550 Russians.  It is a belated move given that Savchenko has been in Russian custody since the beginning of July last year, but cheering, especially since it spells out the lack of any  substance to the charges against Savchenko.

Moscow has thus far ignored the commitment it made under the Minsk Agreements to release all POWs and other people held illegally, as well as calls from the US State Department, PACE and the EU to free the former military pilot, now Ukrainian MP and member of the Parliamentary Assembly of the Council of Europe. In fact, the charge of ‘illegally crossing the border’ was announced shortly after PACE adopted a resolution calling for Savchenko’s release within 24 hours.

There have been demonstrations throughout the world calling to free Savchenko, and on Monday, 14 EU foreign ministers and a French diplomat staged a public appeal for her release.

On the 60th day since Nadiya Savchenko took any food, she is due in court for a hearing regarding detention.  It is known already that the prosecution is planning to ask for a further extension.  This is despite the fact that Savchenko said last week that she had not seen the investigator since New Year, and the latter has yet to provide any evidence to the court substantiating the charges against Savchenko.

Despite the fact that this is a death sentence for a person who has not been convicted of any crime.

However empty the appeals to ‘mercy’ may seem, the Russian letter is rightly addressed to Vladimir Putin.  It is he who answers for Nadiya Savchenko’s life.