Why will you not release Nadiya Savchenko, Mr Putin? 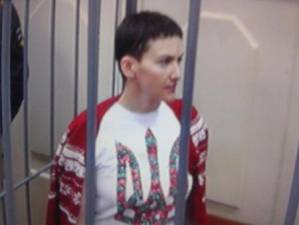 A day after the Minsk II agreement was announced, Russia has claimed that Nadiya Savchenko is not unlawfully held, nor a hostage, and will not be released.  This is not simply in breach of Russian President Vladimir Putin’s assurance to Ukraine’s President Petro Poroshenko that Savchenko would be released “shortly’.  It also flies in the face of resolutions from the Parliamentary Assembly of the Council of Europe [PACE], European Parliament and calls from numerous democratic countries.  All have stressed that Savchenko must be released in accordance with the first Minsk Accord signed in September.   That document was flouted from the outset by both Russia and its proxies in eastern Ukraine, and the Kremlin is now, regrettably, demonstrating equally bad faith with respect to commitments only just made.

It is also showing quite irrational brutality and lawlessness.  Nadiya Savchenko has now been on hunger strike for 62 days and has consistently rejected all pleas, including from her mother, to abandon her protest which she calls the only way left to her to fight the injustice against her.  After such a long period without food, her very life is in danger.

The Kremlin wishes to present this case as a normal trial and is claiming that it must be decided by a court.  No Russian court has yet paid any attention to the fact that Savchenko has an irrefutable alibi and has not investigated her claim, backed by evidence, that she was captured by Kremlin-backed militants in eastern Ukraine and brought to Russia by force.  It has consistently allowed every extension of her detention despite the fact that the prosecution has not provided any evidence to back the charges laid, nor any grounds to justify her continued detention. The reasons for remanding a person in custody are: a well-founded belief that they could be a danger if released; that they could abscond or that they could try to influence witnesses or the investigation.  If the first two are wildly improbable, the third is grotesquely absurd since the only ‘witnesses’ in this shameful case are the militants who captured her, and the investigators are taking their orders from Russia’s increasingly politicized ‘Investigative Committee’.  Putin’s press secretary, Dmitry Peskov’s claim that Savchenko’s detention and trial are “in full accordance with Russian legislation” is demonstrably false.

Savchenko was captured in Ukraine, not Russia and the claim that she herself entered Russia on foot is simply absurd. If it were not so, the Kremlin, together with all government-controlled media, would not so assiduously avoid mentioning the fact that there is proof that she was in the hands of the militants around June 20, a mere 12 days before she was remanded in custody by a Russian court.

Nadiya Savchenko has now indicated that she would agree to end her hunger strike if placed under house arrest on the territory of the Ukrainian embassy in Moscow, thus enabling the so-called ‘investigation’ and trial to continue.

Why not allow this solution?  Ilya Novikov, one of Savchenko’s lawyers reports a stream of visits, including from the Russian Ombudsperson, to the SIZO where the former pilot, Ukrainian MP and PACE delegate is being held.  There is clearly concern that Savchenko, who as a PACE delegate is entitled to diplomatic immunity, will die in Russian imprisonment.  The visitors are reported to have promised that the trial will be speeded up.  After the court hearing on Feb 10 which “found no grounds” for not allowing a three-month extension to Savchenko’s detention, this promise is surely as empty as the assurances which Putin gave in Minsk.

For this reason it is frustrating that the European Court of Human Rights should have decided not to apply interim measures under Rule 39 of its Rule of Court, and order Russia to release Nadiya Savchenko from detention.  Instead it “invited Ms Savchenko to put an end to her hunger strike and requested the Russian government to provide factual information concerning her situation.”  It is possible that the Court does not wish to create a precedent whereby any person on hunger strike could apply for interim measures.  It is also quite conceivable that Russia would flout the Court as it has done by refusing to release, Khaiser Dzhemiliev, the son of veteran Crimean Tatar leader Mustafa Dzhemiliev.

The communique mentions that the European Court of Human Rights consideration of Nadiya Savchenko’s case, first lodged in July 2014, “has been granted priority”.

Savchenko was captured in Ukraine and abducted to Russia.  There had been no suggestion prior to her appearance in a Russian court that she was wanted on any charges and there are no grounds for her continued detention.  There is every reason to assume that the Court in Strasbourg will find Russia in violation of the European Convention on Human Rights.

Priority status is appropriate but Nadiya Savchenko’s life is in danger now.  Moscow is demonstrating contempt for commitments only just agreed to avert sanctions and likely supply of arms to Ukraine.  The West has levers and should apply them.